Jamestown S’Klallam Tribe Plans for Change on the Olympic Peninsula

Jamestown S’Klallam Tribe Plans for Change on the Olympic Peninsula

With valuable cultural and dietary assets at risk from sea level rise, this Pacific Northwest Tribe developed a plan to identify community adaptation priorities and concerns, and charted a course of action to address them.

Climate stressors and other impacts

The Jamestown S’Klallam Tribe resides on the northeastern portion of the Olympic Peninsula in northwestern Washington. The Tribe is made up of nearly 600 members, with close to 300 living in the area. Historically, the Jamestown S’Klallam have adapted to both climatic changes as well as radical cultural changes brought on by colonization. In more recent years, the Tribe has identified climate change as a major concern for their community.

Sea level rise threatens important coastal areas such as Sequim and Discovery Bays, shellfish gathering along local beaches, and transportation infrastructure and safety. Many roads and buildings could be flooded or damaged by higher ocean waters. Ecosystem changes that will impact culturally important species are another major concern for the Tribe—the Jamestown S’Klallam rely on many plants and animals for their community health. Salmon and shellfish are integral parts of peoples’ dietary and cultural health. Western redcedar is one of many species used to make baskets, and is also the medium for carving, canoe-building, and other important traditions. Changes in temperature and seasonality of water could stress these and other species. As climate conditions change, species’ ranges may shift. Without access to these cornerstones of their culture, the Jamestown community would suffer. Community health relies on the ongoing relationship with animals and plants, both on land and at sea.

To better understand the challenges facing the Tribe, and to promote the continued resiliency of their community, the Tribe prepared a Climate Vulnerability Assessment and Adaptation Plan. To develop the Plan, the Tribe worked with support from a U.S. Environmental Protection Agency (EPA) Indian Environmental General Assistance Program (IGAP) grant, and in partnership with Adaptation International, a climate change consulting firm, and Washington Sea Grant, a collaborative project between the National Oceanic and Atmospheric Administration (NOAA) and the University of Washington. 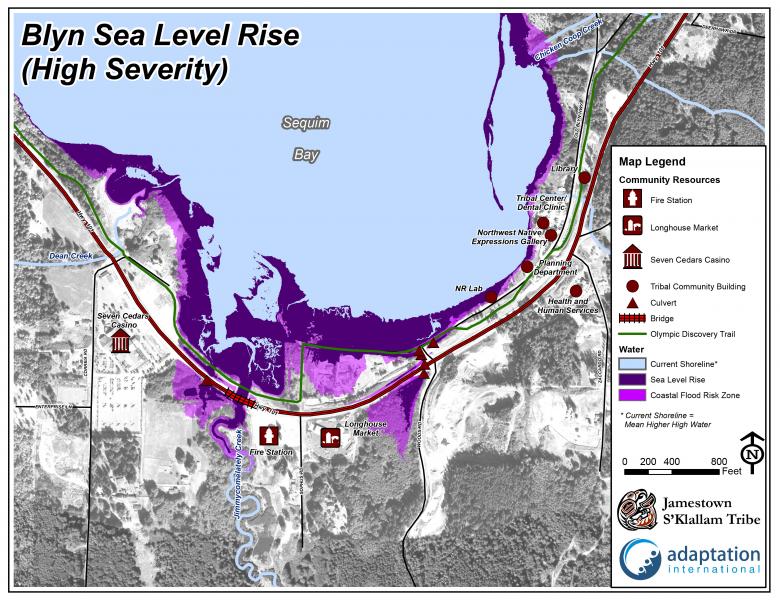 Projected sea level rise map for the Blyn, Washington, area toward the end of the century.

The Plan focuses on identifying community adaptation priorities and concerns, and creating a course of action to address them. For example, sea level rise is such a serious concern for the community that the Adaptation Plan focuses on developing maps of projected changes. Without the ability to stop climate impacts, the Tribe must focus on its capacity to prepare for changes. Planning for future challenges and generations will promote resiliency in the community. While tribes in the Northwest are largely not responsible for causes of climate change, the Jamestown S’Klallam are taking responsibility for their community’s health and well-being.