The Native Navajo people of the southwestern United States are facing an increasingly dry climate. In a region that receives an average of only six inches of precipitation per year, average warming of just two degrees Fahrenheit can significantly increase evaporation and loss of water through plants, reducing available moisture by a third. Alone, this drying process has the potential to fundamentally alter local ecosystems. When combined with a decrease in winter snowfall that feeds year-round streams, the impacts of drying can multiply.

A Record of Change: Science and Elder Observations on the Navajo Nation

Roughly one-third of the Navajo Reservation is covered with sand dunes. In the already windy and increasingly arid environment, vegetation that can grow on dunes withers, and dunes can become mobile—obliterating everything in their path. Scientists from the U.S. Geological Survey (USGS) are now conducting research on the dunes. This work can provide critical data to the Native peoples of the region as they consider how they might respond.

Dunes on the move 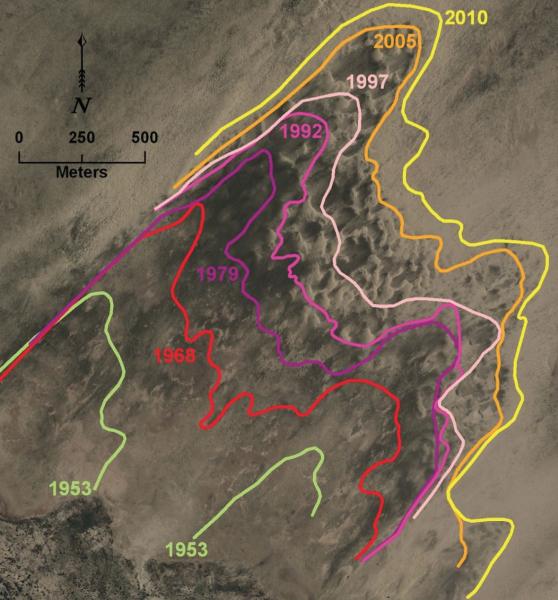 This annotated aerial photo shows the range and movement of Great Falls Dune Field on the Navajo Nation from 1953 to 2010. Instructions at the end of this case study describe how you can explore this region in the interactive Climate Explorer tool.

Sand dunes can tell the story of drought and climate change in dramatically visual ways. In times of adequate moisture, sand dunes don't show much resemblance to the barren, shifting mounds of sand portrayed in motion pictures; rather, they are draped in vegetation and look very similar to the surrounding landscape. It is only when their moisture content remains low for extended periods that dunes begin to resemble their Hollywood stereotypes.

When temperatures rise and evaporation increases, soil’s ability to hold together and absorb water decreases. Soon, plant communities on drying dunes decline, leaving bare soil without protection from the wind. Sometimes, native plants are replaced by invaders such as Russian thistle, also known as tumbleweed; these plants can grow on dunes, but they break off at the stem and tumble away, leaving dune surfaces exposed to the wind. Stripped of their former plant communities, dunes begin to shift, physically moving across the land as the sand particles are blown about. Once dunes begin to move, the dust and fine organic material that accumulates with soil development blows away during the windy spring. Sometimes, strong winds carry and deposit large amounts of sand in short periods of time—for instance, research has documented sand-dune migration rates of 115 feet per year or more. The lack of fine particles that contain plant nutrients, as well as the physical motion of the sand, disrupt local ecosystems because most plants cannot survive in these conditions.

This aerial view shows dunes moving from the upper right to the lower left of the image. Dunes have already buried a portion of a roadway, and they now threaten to engulf homes.

As dune mobility increases, so do associated health, safety, and economic hazards. Rangeland available for Navajo ranchers to graze their livestock decreases, and existing rangeland may be overtaken by invasive species that are less desirable for forage. Reduced resources for Navajo sheep ranching means less wool for Navajo weavers, who depend on rug making for their income.

Once dunes begin moving, they can overtake roads and alter drainage patterns, and blowing sand can seep into homes and other structures. These conditions can increase respiratory ailments and make it difficult to complete ordinary tasks, such as traveling to buy groceries or visit a doctor. In the community of Teesto, Arizona, a tractor must clear a path to permit the school bus to collect children, and families must regularly control sand to prevent their homes and buildings from being engulfed. 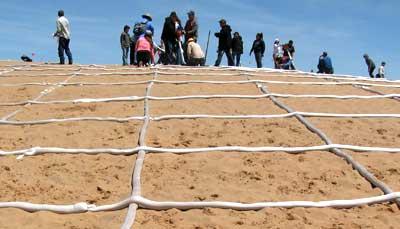 Volunteers lay out a grid of sand sausages—sand-filled tubes made of biodegradable fabric—on a Teesto sand dune to stabilize its surface.

Some Navajo Nation communities are also working with the U.S. Geological Survey and the Northern Arizona University Environmental Education Outreach Program (EEOP) to provide education and to test methods to that may help stabilize sand dunes. One strategy involves making fabric tubes of corn-based material and filling them with sand. People lay out these “sand sausages” in a grid pattern, and plant small seed cakes containing native seeds in a heavy clay base. The seed cakes prevent seeds from blowing away and the sand sausages enhance rain capture. These efforts—adapted for use from an application on sand dunes in Mongolia—may give native plants a better chance to stabilize the surface of the dunes through better rainfall capture.

Further work will continue to measure changes on plots where experimental strategies are used to stabilize dune surfaces, especially to benefit remote areas where roadways become blocked by moving sand dunes. Teaching and outreach efforts will also continue in order to spread information on the behavior, introduction, and preservation of Native plant species, and how they can enhance resilience.