Our Spirits Remain Tied to This Land

Our Spirits Remain Tied to This Land

The Puyallup Tribe conducted a climate change impact assessment for their ancestral lands along the Puyallup River and the coasts of Puget Sound—and improved tribal and regional adaptive capacity.

“For thousands of years, the Puyallup River and coasts of the Puget Sound have sustained our way of life by giving us the salmon, shellfish, wild game, roots, berries, and cedar trees that are the foundation of our culture, traditions, and heritage. In spite of the many challenges we have faced, our spirits remain tied to this land.”

Nearly 4,000 people are members of the Puyallup Tribe of Indians, and many of them live on the Puyallup reservation near Tacoma, Washington. Though the reservation covers only a small portion of their ancestral land base, the land has remained under Puyallup stewardship for centuries. Tribal members continue to harvest traditional foods and proactively tend the landscapes of their ancestral land, promoting biodiversity and improving fish and wildlife habitat.

The Salmon People at Risk: What Climate Change Means for the Puyallup Tribe

Climate change and increasing urbanization both pose new threats to Puyallup ways of life. Warming temperatures, rising sea levels, and changes in precipitation threaten the resources upon which Puyallup tribal members have relied for millennia. Expanding cities also bring changes that threaten the health, economy, and infrastructure of the community.

Considering both climate and non-climate stressors

Declining salmon populations in the Puget Sound region are a major concern to tribal members, who rely on them for subsistence and ceremonial purposes. In 2014, at the Tribe’s First Fish ceremony, only a single fish was caught. This poor result from a once-abundant resource highlighted the need for more support and enhanced recovery efforts.

As temperatures increase, streams that have supported salmon migration for thousands of years are experiencing higher water temperatures and reduced dissolved oxygen levels. Warmer stream temperatures and lower summer flows may alter the timing of salmon migration, reduce growth rates, and increase vulnerability to toxins, parasites, and diseases. In fact, shifting species distributions and habitats are anticipated to affect the accessibility and availability of some traditional plants, roots, and other key resources. 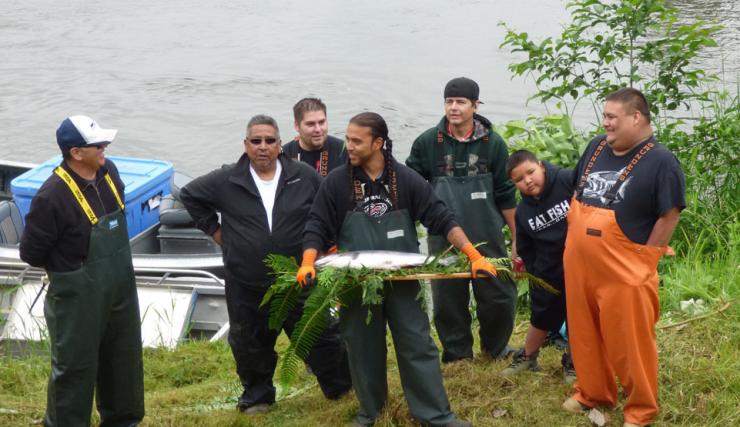 Puyallup tribal members gathered around a freshly caught salmon on a bed of cedar branches.

Non-climate stressors on salmon in the region include population growth, development, and pollution associated with increasing urbanization. The Tribe's neighboring cities of Edgewater, Federal Way, Fife, Milton, Puyallup, and Tacoma have grown around and upon the boundaries of the highly urbanized Puyallup Indian Reservation.

While political boundaries can sometimes complicate adaptation efforts, the Puyallup have found potential in collaborating with neighboring jurisdictions that have similar vested interests in preserving and protecting important ecosystem functions and services. Effective adaptation planning in the region requires an integrated approach that includes public health and safety concerns for tribal and non-tribal members alike. Protecting fisheries and hatcheries are already among the Tribe’s top priorities, and tribal members have developed a number of projects to help restore the salmon population from its dire state.

In 2015 and 2016, the Tribe collaborated with Cascadia Consulting Group to conduct a Climate Change Impact Assessment (CCIA) to improve their adaptive capacity. The assessment used both global and regional climate models that reflect future emissions scenarios, and incorporated both local tribal knowledge and the best available climate change science to focus on how climate change impacts could affect particular resources and sectors. 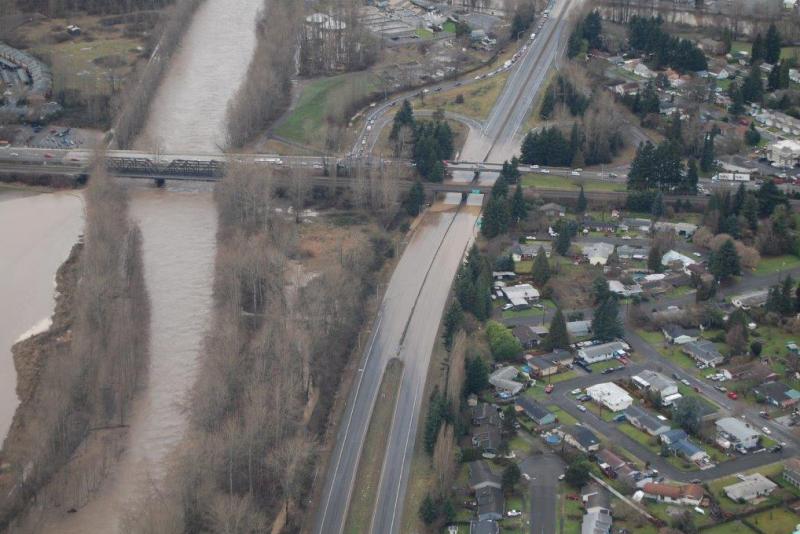 Many transportation routes lie within flood and landslide risk areas, which threatens to prevent emergency personal from accessing tribal members during times of emergency.

The results showed that increases in temperature, declining summer precipitation, reduced snowpack, and increased chances for riverine flooding have the potential to alter ecosystem health and threaten public health and safety. The study also noted the potential for more frequent and severe extreme heat, flooding, and algal bloom events, and connected them to increased risks of respiratory illness, foodborne illness, and physical injury.

The assessment also pointed to the risks associated with heavy rains: particularly in the winter, heavy rain can increase the incidence of flood and landslide events. These could jeopardize the health and safety of Puyallup tribal members, and simultaneously impact emergency transportation routes in areas at risk of flooding or landslides.

Keeping up with the pace of a shifting climate

In response to public health and safety risks identified in the assessment, tribal staff are working to improve their disaster planning capacity. They want to be prepared to respond to the full range of hazards that could impact community safety and well-being. The CCIA report also found that considering climate change in constructing or updating transportation infrastructure could help ensure that these systems can endure future impacts.

While there remains much to learn about the effects of climate change on both natural and built systems in the Puget Sound, time itself is one of the most limited and important resources. Keeping up with the pace of a shifting climate on the ancestral lands of the Puyallup will require more science and more collaboration. Tribal members have overcome adversity in the past, and recognize that successful adaptive land management has only been possible through strong connections to the land and one another.

With this in mind, the Puyallup remain dedicated to ensuring that tribal resources, customs, and traditions thrive for many generations to come.