Changing conditions spur a utility in Washington, D.C., to consider and address its future climate vulnerabilities.

Maureen Holman is worried about rising sea levels. As the Sustainability Chief at the District of Columbia Water and Sewer Authority—locally known as DC Water, the utility that delivers clean water to taps and treats wastewater in the nation’s capital—Holman is taking action to protect critical water infrastructure. 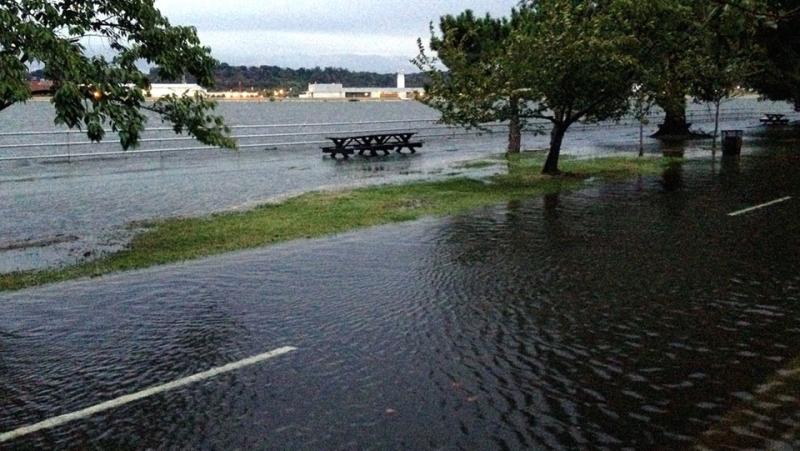 On September 26, 2015—with a full moon at one of its closest points to Earth—tidal flooding at the confluence of the Potomac and Anacostia Rivers spills onto picnic grounds and roadways.

The metropolitan region surrounding Washington, D.C., is vulnerable to tidal flooding along two rivers, the Potomac and Anacostia. Sea levels in the mid-Atlantic region have risen almost 10 inches over the past 80 years. These days, even minor storms and high tides frequently result in “nuisance flooding,” sloshing water over roads and sidewalks. According to a NOAA study, Washington, D.C., is one of the top 10 locations in the country for this type of flooding. Nuisance flooding in D.C. has increased 373 percent since the 1950s.

Across the capital region, most of the sewage drains to a 150-acre facility called the Blue Plains Advanced Wastewater Treatment Plant. Like most wastewater treatment plants, Blue Plains was built at the very lowest spot in the city, so the plant wouldn’t have to spend energy pumping wastewater uphill. In recent years, that lack of elevation has left Blue Plains vulnerable to rising sea levels.

The planning process: data and choices

As the threats of a warming climate are better understood, cities and towns across the country have come to see that planning for the climate of the future is a good investment today. When government agencies in the District of Columbia, led by the Department of Energy & Environment, began a process of preparing for climate change, DC Water joined in. The city brought in climate scientist Katharine Hayhoe to help stakeholders consider how climate change might impact the district in coming decades. Hayhoe is a professor from Texas Tech University who develops regional-scale climate projections from global models, and helps people envision what the projections mean for the future.

Hayhoe helped several large cities—Boston, Chicago, Philadelphia, New York, and Austin—go through similar planning processes. She knows which parts of a city’s infrastructure make it vulnerable to climate change, and how to use spatial data to catalog natural resources, determine sensitivity to flooding, and identify where the most vulnerable populations live. And she knows how important community involvement is to ensure a project’s success.

As part of the task of assessing the city’s vulnerabilities, the group consulted climate projection data to understand potential changes in sea level, storm surge, and extreme weather. Engineers working with the group also needed projections for variables such as extreme heat events. Holman and other infrastructure managers and planners worked to fill these gaps, extrapolating from existing projections of how average heat and humidity would rise in the future.

NOAA's tidal gauge in the Washington Channel, just upstream from the Blue Plains facility, shows a clear trend of rising water over the last century.

Planners also made a list of city assets—both physical (like hospitals) and conceptual (like the tourism economy)—that are critical for people’s lives and need to be protected. They also checked what infrastructure had been impacted by storms, so that, as Hayhoe described, “we could start to put a price on the value of building better resilience.” With historical information, she explained, “you can show that building resilience is actually cheaper than recovering from a disaster.”

After assessing the science and cataloguing city assets, Washington had the data it needed to recognize and manage climate-related risks. Using results from its vulnerability assessment as a basis for discussion, the group still had to make some difficult decisions on priorities and budgets as they drew up a draft implementation plan to make the city as resilient as possible to the impacts of climate change.

In addition to participating in the city’s climate resilience exercise, the water utility also completed its own modeling process to consider future conditions. The exercise reaffirmed that Blue Plains, the wastewater treatment plant that serves more than 2 million people in Washington, Maryland, and Virginia, is "by far DC Water’s most valuable asset," says Holman.

Results from both efforts helped DC Water make the decision to build a $13.2 million seawall around the perimeter of the Blue Plains facility. A 17-foot high wall, they calculated, would protect the 150-acre plant against a 500-year flood. Holman and DC Water also joined the Washington, D.C., Silver Jackets, an intergovernmental and interagency task force that works to manage flood risk.

As the largest electricity user in the district, Holman also knew it would be helpful to be able to protect DC Water's electricity supply in an emergency. The utility chose to invest in a 10-megawatt combined heat and power plant that will reduce energy needs—as well as reducing the plant’s carbon emissions by more than a third.

Washington, D.C. will take years to fully implement the recommendations of its resilience project, but its water utility is ahead of the curve. DC Water has already built its heat-and-power plant and a good part of the seawall around the Blue Plains water treatment plant. Protecting Washington’s water assets, as Holman says, is a matter of “necessity, not innovation.”