Recognizing and Responding to Drought on Pacific Islands

Recognizing and Responding to Drought on Pacific Islands

Compared to other extreme events, drought is a relatively quiet disaster. On Pacific Islands, where water supply depends very directly on precipitation, residents are working to recognize signs of drought and communicate them to others so that they can respond quickly.

An unfulfilled promise of rain

The soil was cracking, the leaves were turning brown, and the groundwater was becoming saltier. Drought had come to the northern atolls of the Republic of the Marshall Islands (RMI) in January 2013.

“You see that rain out there?” asked meteorologist Chip Guard, looking up at the horizon. “It’s falling from the sky but not hitting the ground. We call that virga. You know where we see virga? In deserts.”

As precipitation is the sole source of most islands’ freshwater supply, a lack of rain in any season can reduce the amount of water available in soil, streams, and groundwater, stressing natural ecosystems and triggering health problems for humans. 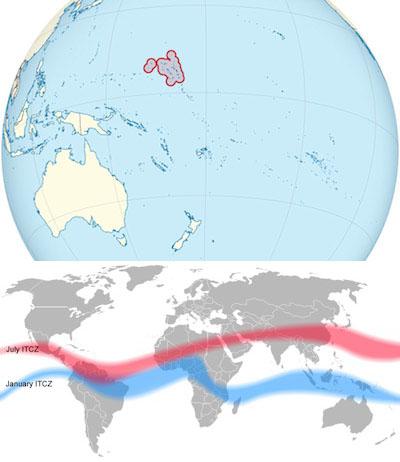 More than 1,000 islands and islets near the equator comprise the Republic of the Marshall Islands (RMI). The bottom map shows the average locations of the Intertropical Convergence Zone (ITCZ) during July and January: the dynamic location of this global band of clouds is one factor controlling precipitation over RMI.

December through April is the dry season for the RMI, but 2013’s dry season was shaping up to be much worse than normal—especially in the northern, or outer, atolls. During the preceding fall months, two of the outer islands—Wotje and Utrik—had received only 28 and 25 percent, respectively, of their normal rainfall.

Precipitation for RMI comes from two sources. One source is visible on most satellite images of Earth: the dense strip of clouds that stretches across the Pacific Ocean near the equator, called the Intertropical Convergence Zone (ITCZ). The other source is an area of low atmospheric pressure called the Tropical Upper Troposphere Trough (TUTT), in which clouds often form and showers often follow. Changes in the location or size of the ITCZ or the TUTT can cause a precipitation decline for RMI.

The national Weather Service Office (WSO) in Majuro, the capital of RMI, was receiving rainfall observations and forecasts from a number of organizations and observation stations. All signs pointed to a dry spell that was unlikely to let up for several months. “The seasonal outlook for rain was saying by January, February, March, it’s not getting any better,” said Reggie White, WSO meteorologist.

Weather experts rely on meteorological measurements to determine when a drought is occurring. Local observations, however, are also useful. Residents in the outer atolls depend on rainwater to refill their water tanks and recharge their aquifers. If residents report lower-than-usual tank levels and increasingly brackish groundwater, those observations can point to drought before it’s observed in meteorological data.

These citizen reports are especially important to the WSO because it has observation stations on only eight out of the 24 atolls that comprise RMI. “We could only get scientific measurements from those observation stations,” said White. “But to get a better feel on the neighboring atolls which don’t have equipment and rain gauges, we were asking them, “So how much water is in your tank?’”

White and his team in Majuro were communicating with the outer islands through a new tool called the Chatty Beetle, a portable satellite transmission device. Users can send short text messages—159 characters maximum—to anywhere in the world. The device rings loudly until an incoming message is received and sends a confirmation back to the sender. “It allows us to communicate with the outer islands using short burst messages,” said Guard, “so we can pass rainfall information back and forth and also issue warnings.”

On February 5, the WSO issued a drought information statement that included a synopsis of the conditions and impacts such as rainfall, temperature, and coral bleaching threats, as well as five- to ten-day forecasts of those variables. The RMI government used this information to develop drought response plans.

Three months later, on April 19, the government declared a state of emergency. During the first three months of 2013, less than four inches of rain had fallen on many of the outer islands. At the Wotje observation station, less than one inch had been recorded.

On the heels of the emergency declaration, assessment teams—led by the National Disaster Management Office and supported by three international organizations—left for the outer islands. They found the groundwater too salty for human consumption; residents were suffering associated health problems including gastritis, diarrhea, vomiting, abdominal pain, fever, and hepatitis.

Groundwater is always somewhat salty in the outer islands, Guard said. “You rarely hear outer islanders complain about water quality. They just drink it. But one day they can drink it and one day they can’t during these severe droughts. The concentration of salt gets too high and they’ve got about 48 hours before people start getting sick and some may die."

Guard continued, “It’s critical that we provide the government information, far enough ahead of time to deliver the necessary water resources.” To ease the crisis, boatloads of bottled water were sent to the outer islands, along with several individual desalination systems to produce fresh water.

The transport of supplies and equipment is the most costly part of responding to drought in the RMI. “The biggest challenge is the distance between islands,” said White. “All that equipment might only cost a few dollars, but the trip you make from here to there is very expensive because you have to pay for fuel and to charter the ship.”

Rain returned to the outer islands in June, though the state of emergency was extended until early July. There were significant hurdles ahead. Many crops, including coconut, breadfruit, taro, and tapioca, had withered in the drought. Plants such as sweet potato and dry land taro from Fiji were sent to the outer islands.

Officials are aware that more comprehensive monitoring networks for rainfall and other climate variables—from Utrik to Majuro—could improve future drought predictions. They also recognize that observational knowledge of on-the-ground conditions had proved invaluable. Thus, they continued to train outer island residents in drought recognition and response.

“Drought kind of sneaks up on people,” said White. “If you’re not preparing yourself for it, you can find yourself in deep trouble because the rain can stop almost instantaneously.” Through better preparation, he hoped, the response to the RMI’s next drought will be earlier and more effective.

Severe drought struck the country again in early 2016, corresponding to one of the strongest El Niño events in recorded history.  Although impacts swept the outer islands, according to White, the RMI government and international community began emergency response actions early and were able to mitigate the worst effects on communities.