The Southeast's coastal zone is a vibrant economic driver of the United States economy. As natural and built environments are increasingly threatened by climate-related hazards, individuals and communities are seeking ways to build resilience to protect these valuable assets. 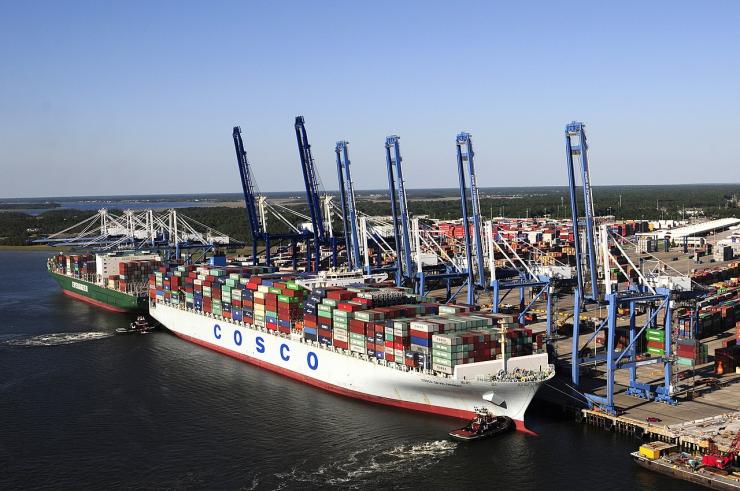 Facilities at the Port of Charleston handle containers, motor vehicles, and other cargo, as well as Charleston's cruise ship operation. Click on the image for a larger view and source information.

Industries related to the coast such as fishing, shipping, and tourism are economic drivers in the Southeast, which accounts for more than 20 percent of the nation's gross domestic product. Despite its diverse livelihoods and robust economy, the combined effects of accelerating sea level rise, increases in the amount of rain that falls in heavy downpours, and continuing coastal development are increasing flood risks and threatening personal safety, vital ecosystems, and coastal economies.

Averaged over the whole planet, warming temperatures from the emissions of heat-trapping gases are causing land and glacial ice to melt and ocean water to expand as it warms. Together, these processes are raising average global sea level. As warming continues, the rate of global sea level rise is accelerating. Estimates for the amount of global sea level rise expected in the coming decades vary depending on local geography. Though timing differs, all scenarios in the Southeast United States point to increases in the depth and frequency of coastal flooding. By 2050, many Southeast cities are projected to experience more than 30 days of high tide flooding per year, even with reductions in fossil fuel emissions.

Water level data measured in Charleston Harbor by NOAA Tides & Currents since the early 1900s show the observed increase in relative sea level. Click the graph for a larger view and source information.

The highest tides of the year occur when the Moon’s regular orbit brings it close to Earth while the Moon is in its new or full phase. This natural condition, unrelated to climate, is called perigee (peri = near and gee = Earth). Perigean tides, also called “king tides,” usually occur over several days in the spring and fall each year. In many cities, these conditions result in recurrent flooding along coastlines. Additionally, even without perigee, high tides, sometimes heightened by weather, are more frequently generating flooding impacts.

Without significant adaptation measures, many coastal locations in the Southeast are projected to experience daily high-tide flooding by the end of the century. Numerous historic buildings, forts, and prehistoric archaeological sites exist across the coastal Southeast, and more than 13,000 of these locations are at risk of flooding and inundation.

Much of the Southeast region’s coast is bordered by large expanses of salt marsh and barrier islands. Long causeways with intermittent bridges connect the mainland to these popular tourism destinations. Most of the bridges were built decades ago at only a few feet above the highest water levels of the year. Sea level rise has put these transportation connection points at risk: high-tide coastal flooding has started to inundate these and other low-lying roads, restricting access during certain times of the day and stranding people on the islands. 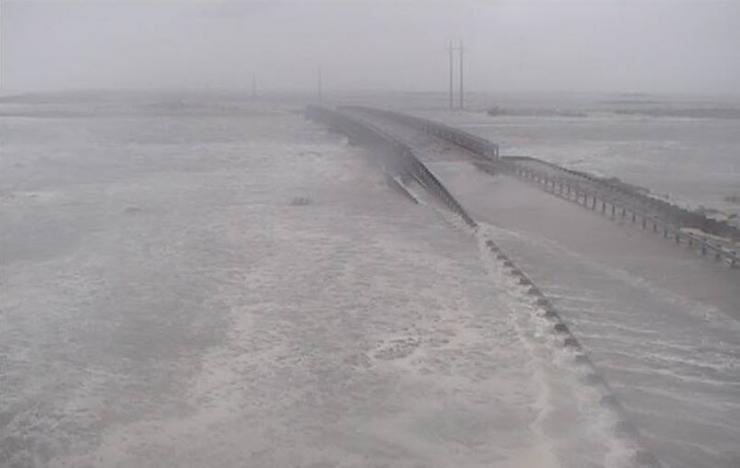 In several low-lying coastal cities in the Southeast, the annual number of high-tide coastal flooding events has increased 500 to 1,000 percent since the 1960s. High-tide flooding is now accelerating at 75 percent of locations along the East and Gulf Coasts. Nineteen locations, primarily in these regions, broke or tied their flood records. NOAA's National Ocean Service offers more fast facts about high-tide flooding. Each year, NOAA documents changes in high-tide flooding patterns from the previous year at 98 NOAA tide gauges along the U.S. coast and provides a flooding outlook for these locations for the coming year, as well as projections for the next several decades. NOAA's Tides & Currents site offers the most recent annual outlook.

High-tide flood monitoring as a climate change indicator is based on National Ocean Service statistically derived thresholds (PDF) that differ from the National Weather Service warning thresholds mentioned above. Nationally, high-tide flooding is occurring twice as frequently now as 20 years ago. It is anticipated that some coastal areas will see high-tide flooding up to 75 days a year by 2050. Observed increases in the frequency of high-tide flooding is directly tied to relative sea level rise, and these events put businesses, neighborhoods, infrastructure, transportation, and ecosystems in the Southeast at risk of economic damage. Further, even when higher tides do not directly cause floods, they can cause other sources of water, such as rainfall or rivers, to flood communities by preventing adequate drainage capacity. 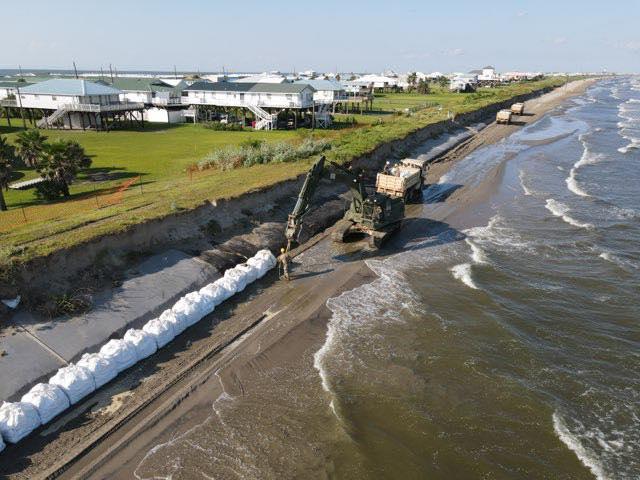 Members of the Louisiana National Guard assist local and state agencies to reinforce an exposed levee in Grand Isle in preparation for tropical storms.

As sea levels and temperatures rise, tropical storms can become more powerful and make landfall further inland. Destructive winds and storm surge are increasingly threatening coastal infrastructure, economies, and people. Without significant adaptation measures, many more coastal locations in the Southeast are projected to experience increased duration of flooding and wind damage from tropical storms by the end of the century. 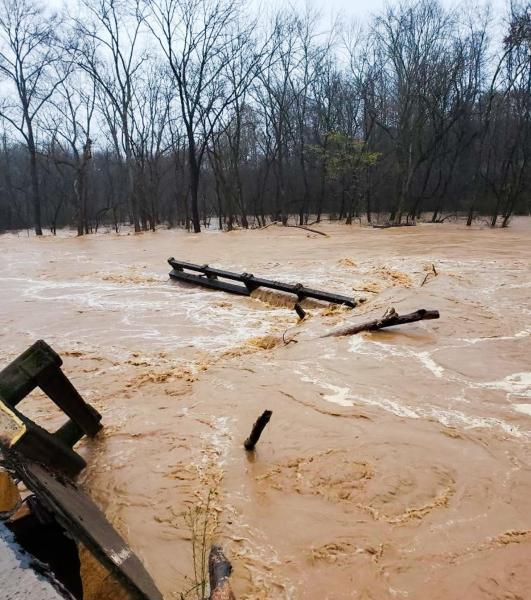 In November 2020, heavy rains associated with Hurricane Eta led to flooding that took out the Liberty Hill Road Bridge in North Carolina.

Events of such magnitudes are projected to become more likely in the future due to a changing climate, putting more people in peril from future floods. Unfortunately, the majority of existing regulatory flood maps do not account for future flood risk due to the increasing frequency of more intense precipitation events, sea level rise, or for new development that reduces a floodplain's ability to absorb and channel stormwater.

The growing number of extreme rainfall events stresses stormwater management and transportation systems that were not designed to withstand such events. The combined effects of rising numbers of high-tide flooding events, exacerbated storm surge, and extreme rainfall events, along with deteriorating stormwater infrastructure, are increasing the frequency and magnitude of coastal and lowland flood events and significant economic damage from flooding.

Some of the oldest coastal cities in the Southeast were built just above sea level, and they rely on gravity-driven drainage systems to manage their stormwater. As sea levels have risen, these stormwater systems no longer drain into the tidal estuaries. Higher mean sea level causes stormwater outfalls to be partially or fully occluded, which reduces the rate at which stormwater can be drained away. Additionally, seawater in the stormwater pipes prevents rainwater from draining, so it backs up into the streets—resulting in increased flooding from storms that previously would have drained away.

Impacts on transportation and supply chains

Flooding from extreme rainfall events and tropical storms can disrupt transportation and supply chains. When future tropical storms or hurricanes arrive in the Southeast, higher sea levels will allow their associated storm surges to travel farther inland than in the past, inundating larger and more densely populated areas and impacting transportation by blocking or flooding roads and rails. Marine transportation can be impacted as well. Large ports, such as Charleston, Savannah, and Jacksonville, and the rails and roads that link to them are particularly vulnerable to coastal flooding and sea level rise. 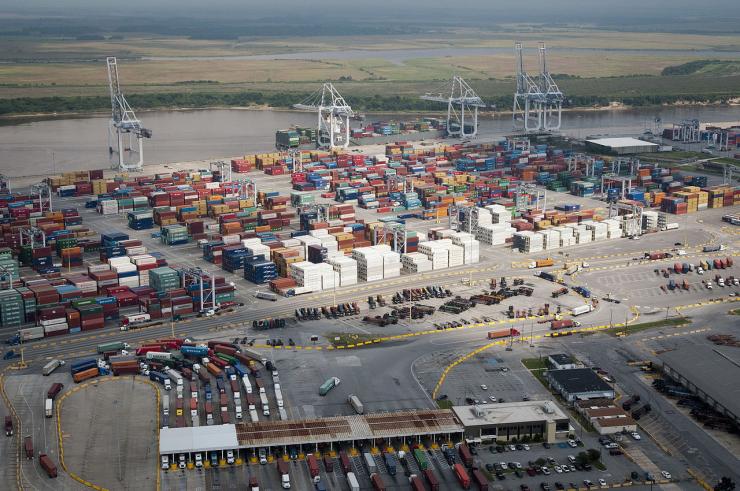 Shipping containers offloaded from cargo ships in Savannah, Georgia, are loaded onto trucks for distribution across the nation.

The Port of Jacksonville distributes raw material for industries, food, clothes, and essential goods to Puerto Rico. Thus, a storm surge in Jacksonville could also have an impact on distribution of goods throughout the U.S. Caribbean region.

For additional information on the impacts of tropical storms, surge, and extreme rainfall events, see the Coasts topic.

Coastal adaptation to increased flood risk will require a variety of approaches at various scales.

The recent increases in flood risk have led many cities and counties to take adaptive actions to reduce these effects. For example, four counties in Southeast Florida formed a climate compact to address climate change impacts, including sea level rise and high-tide flooding; their climate action plan was one of the first intergovernmental collaborations to address climate change, adaptation, and mitigation in the country. Since then, a number of large and small cities in the region have begun comprehensive planning, enacted new building codes, and replaced bridges to deal with coastal flooding issues. 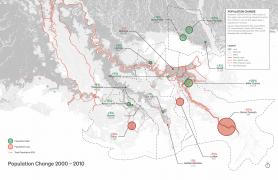 Census data from 2000 and 2010 show population is generally decreasing in the southern part of Louisiana and increasing further north. Click the map for a larger view and source information.

Communities should consider future flood risk when making long-term capital investments in infrastructure. Various tools are available to assess current and future vulnerabilities and risk to help guide decision making. In addition to moving infrastructure out of harm’s way through elevation, nature-based solutions, such as restoration of barrier islands and wetlands, can help mitigate the impacts of storm surge and potential damage to infrastructure.

Many communities in the Southeast participate in the Federal Emergency Management Agency (FEMA) Community Rating System (CRS) program, which provides reduced flood insurance premiums to communities that go above and beyond the minimum National Flood Insurance Program regulation standards. Many communities require a safety factor—also known as freeboard, expressed as feet above the base flood elevation—for construction in special flood hazard areas.

Several Southeast communities have earned insurance premium discounts by implementing freeboard and other regulations that exceed the minimum standards. A recent paper by coastal specialists and economists shows a positive correlation between local government participation in the CRS program and residential flood insurance coverage.1 The more residents and businesses carry flood insurance for their properties, the greater the resilience of the community because it buffers mid-term financial impacts from flooding. See also the Building Resilience in Coastal Communities page in our Coasts topic.

Increases in extreme rainfall events and high tide coastal floods could impact the quality of life of permanent residents as well as tourists who visit the low-lying and coastal regions of the Southeast. Recent social science studies have indicated that people may move away from coastal communities that are vulnerable to the impacts of sea level rise, high-tide flooding, saltwater intrusion, and storm surge, reducing municipalities' tax income. In Louisiana, population shifts have already been occurring due to increased flood risk and land loss.

To learn more about climate impacts on coastal areas, see the Coasts topic.