U.S. coasts are dynamic environments and highly desirable places to live and work. Coasts support jobs in defense, fishing, transportation, and tourism and seaports serve as hubs of commerce that connect the country with its global trading partners. Coasts are also home to diverse ecosystems including beaches, estuaries, and deltas that provide opportunities for recreation, support fisheries, and protect land from coastal storms. 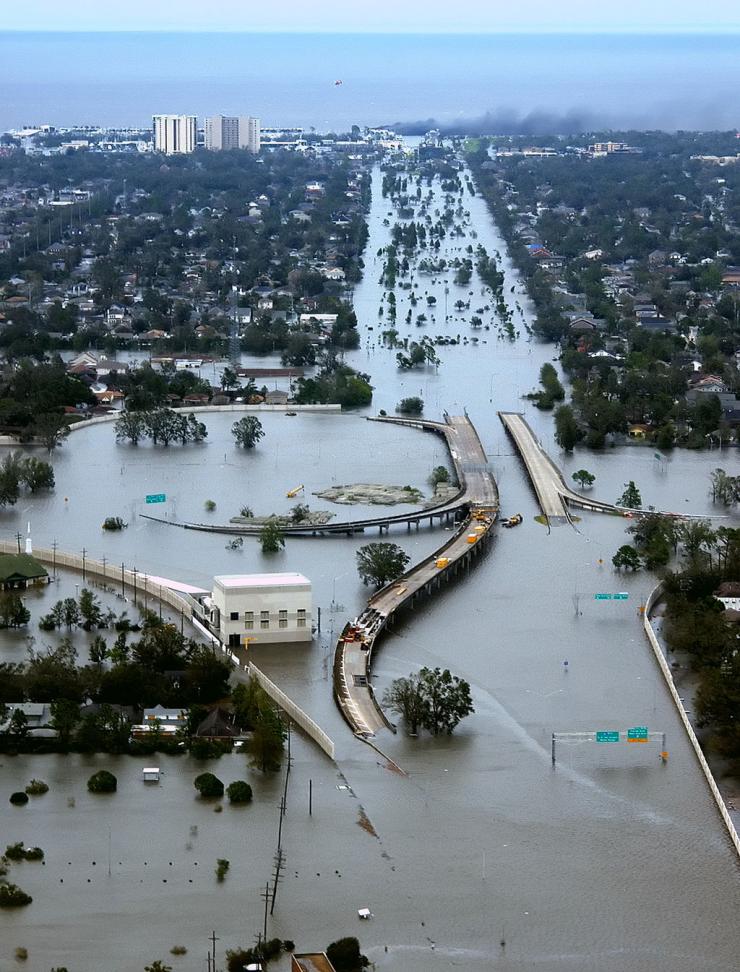 Significant flooding in New Orleans resulted from heavy rains associated with Hurricane Katrina and the failure of the city's flood protection systems.

People and assets in the productive coastal region are routinely exposed to weather and climate-related hazards. Coastal floods occur at many locations each year, caused by events such as high tides, storm surges, strong waves, and heavy precipitation. Impacts from these events can range from mere inconvenience all the way to damaged property, bodily injury, or death. As global sea level rises, higher water levels exacerbate the impacts of these incidents, resulting in deeper floods that last longer and extend further inland. Additionally, as climate changes, some coastal hazards are projected to increase. For instance, coasts may see more severe or more frequent storms and heavier rainfall events.

Although storms, floods, and erosion have always been hazards, they now occur on top of higher sea levels. Combined with coastal development, these hazards now threaten approximately $1 trillion in real estate along U.S. coasts.

Observation-based extrapolations from tide-gauge data and projections for five scenarios, in meters, for global mean sea level relative to a baseline of 2000. Median values are shown by the solid lines; shaded regions represent the likely ranges for the observation-based extrapolations and projections for each scenario. Altimetry data (1993–2020) and tide-gauge data (1970–2020) are overlaid for reference.

At regional and smaller scales, relative sea level is affected by vertical land movement and ocean currents. Therefore,specific amounts of sea level rise will continue to vary regionally because of changes in both land and ocean height. Any amount of global sea level rise will increase the frequency and magnitude of coastal flooding impacts, posing an increasing threat to people, infrastructure, and coastal economies. 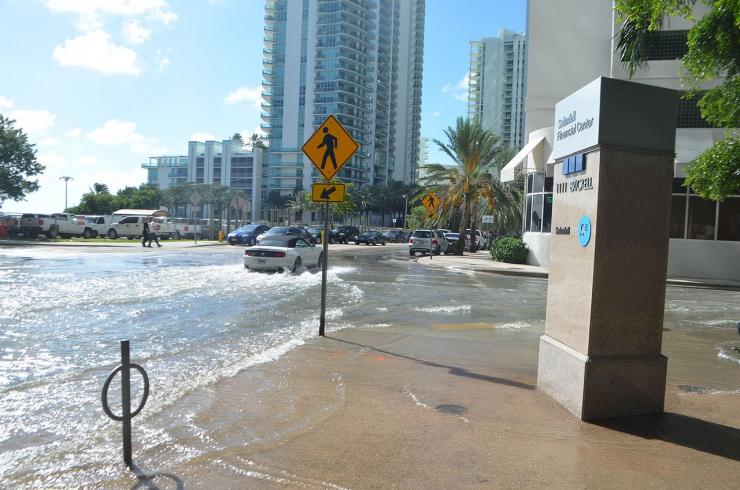 High tide flooding in downtown Miami, Florida. The useful life of roads and other infrastructure is shortened dramatically by repeated saltwater inundation.

Coastal hazards present significant direct costs related to infrastructure. More than 60,000 miles of U.S. roads and bridges in coastal floodplains are vulnerable to extreme storms and hurricanes, and maintenance and repair costs for these assets can run into the billions of dollars. Additionally, indirect economic costs (such as lost business) and adverse socio-psychological impacts have the potential to negatively affect people and their communities.Individuals exposed to weather- or climate-related disasters have been shown to experience negative mental health impacts. Among those most likely to suffer these impacts are some of society’s most vulnerable populations, including people who are elderly, economically disadvantaged, or experiencing homelessness.

Roads, bridges, tunnels, and pipelines, provide important lifelines between coastal and inland communities. Damages to this infrastructure results in cascading costs and national impacts. For example, the entire nation depends to some point on oil and gas distributed from critical energy infrastructure along the coast. Similarly, the entire country depends on coastal seaports for access to goods and services, as they handle 99% of overseas trade.

Incorporating adaptation into infrastructure upgrades will be expensive, yet investing in these interconnected lifelines would support community stability and the nation’s economy. A 2017 report from the U.S. Environmental Protection Agency estimates that cumulative damages to coastal property across the contiguous United States would be significantly reduced if protective adaptation measures were implemented, compared to a scenario where no adaptation occurs.2

Though sea level rise scenarios specify an amount of sea level rise projected for the end of the century and beyond, seas won’t stop rising then. The ocean takes a very long time to respond to warmer conditions at Earth’s surface, so ocean waters will continue to warm and sea level will continue to rise for many centuries at rates equal to or higher than that of the current century.

Managing coasts into the future

With higher seas, the past is no longer the key to the present or future. Historical erosion data and historical flood data simply aren't sufficient for managing coasts with higher water levels. Future coastal development must take sea level rise into account.

The Coastal Zone Management Act of 1972, as amended, states that “because global warming may result in a substantial sea level rise with serious adverse effects..., coastal states must anticipate and plan for such an occurrence.” In particular, the act calls for states to protect natural resources and manage coastal development to minimize the loss of life, property, and other coastal zone assets caused by development in hazardous areas. Additionally, the Biggert-Waters Flood Reform Act of 2012 allows the Federal Emergency Management Agency (FEMA) to update its federal insurance rate maps (FIRMs) to include “relevant information and data” on flood hazards caused by land-use changes and “future changes in sea levels, precipitation, and intensity of hurricanes.”

To learn more about the impacts of climate change and variability in coastal areas, visit the subtopic pages: