Anticipating and Preventing the Spread of Invasive Plants

Anticipating and Preventing the Spread of Invasive Plants

Finding and eradicating invasive plants is a tough job that requires constant vigilance. County-scale maps that show where invasive plants are and where they have the potential to spread in the future are helping on-the-ground efforts to build the resilience of natural vegetation.

The Klamath region of Northern California encompasses some of the wildest and least populated territory in the state. In this region, the Sierra Nevada range meets the volcanic Cascades and younger coastal mountains, and an incredible range of plant life springs from the diverse soils and varied microclimates.

Complex places like this are where scientists expect climate change to significantly scramble ecosystems. Shifts in temperatures, precipitation, wildfire regime, and atmospheric carbon will shift the geography in which species can thrive, leading to competition, migration, and adaptation.

A leader in wildland stewardship

Joshua Smith serves as Restoration Program Manager for the non-profit Watershed Research and Training Center. The Center is based in the once-booming timber town of Hayfork, California, and Smith coordinates many wildland stewardship efforts across the Klamath region. One of the biggest challenges he faces in his work is preventing the spread of invasive plants. “It’s one of the top ways we can protect the health of our forests and rivers,” says Smith. 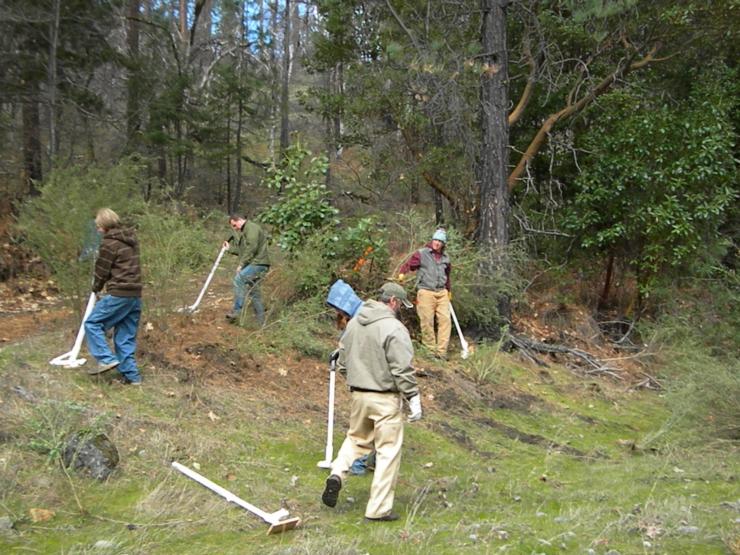 In light of climate change, Smith recognizes that controlling invasive species is more important than ever. As conditions shift and seed-carrying wildlife move along corridors that link key habitat areas, aggressive invasive plants may become established in new areas first—keeping native plants from gaining footholds in newly suitable locations. Smith promotes addressing the existing threat of invasive species as an immediate no-regrets action people can take to support the resiliency of wildland ecosystems.

Smith partnered with the non-profit California Invasive Plant Council (Cal-IPC) to assess which invasive plant species might be a threat to the area under future climate conditions. By mapping current invasive plant populations and considering which were most likely to spread and impact natural resources in the future, they set priorities for controlling the populations that presented the greatest threats.

Maximizing efforts with a mapping tool 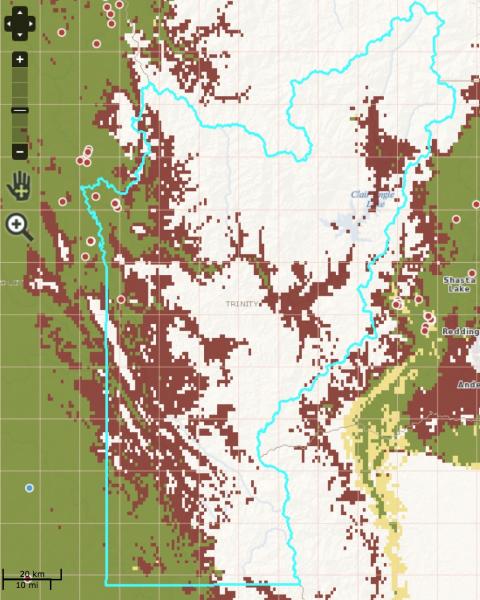 Green areas on this map, centered on Trinity County, California, show areas that are currently suitable for the French broom, an invasive plant. Red areas show locations projected to be suitable for the species by 2050.

The partners used Cal-IPC’s online CalWeedMapper tool to examine statewide maps of 200 invasive plant species. The tool, partially funded by the California Landscape Conservation Cooperative, also showed them where plant populations might spread, and a summary report for the Klamath region helped the partners decide which species should be worked on first.

Using the CalWeedMapper helped Smith’s group identify a high-priority eradication target that had not been recognized. “We had no idea that the small population of French broom in Hayfork was one of the only populations in the county until the tool helped us see it. The tool also shows that climatic suitability for broom in our region is expected to increase in the future, so this is a weed to stop now. We actually started a volunteer effort to work on eradication of French broom because of CalWeedMapper,” said Smith. “The effort removed thousands of mature plants, and we will continue working with our newly trained local volunteers to systematically remove seedlings until full eradication is achieved.”

Smith and others in the Klamath region continue to refine their priorities for eradicating invasive plant populations. Part of the effort involves training volunteers to serve as citizen scientists, who can identify and report key invasive plants they come across while out on the land. This opportunistic surveillance enables quick responses that can lead to early eradication. 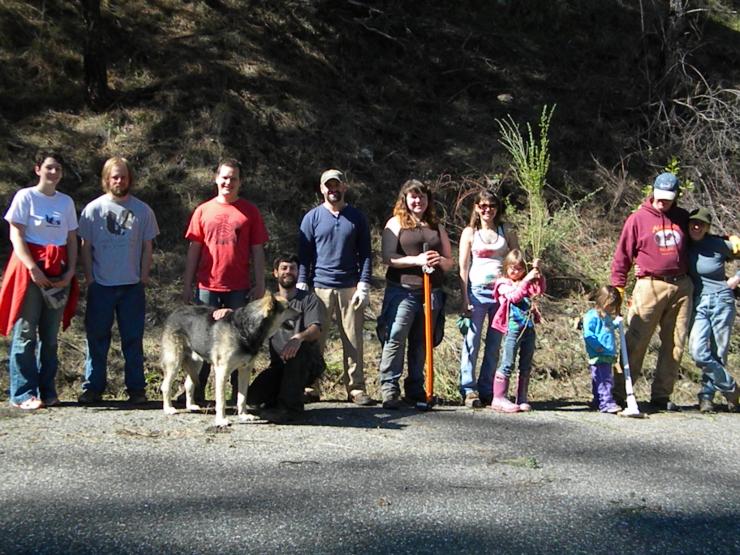 These stewardship efforts will continue into the future as part of a commitment to supporting the region’s resiliency. Work planned for the future includes persistent surveying to track invasive plants, ongoing review of eradication priorities, and targeted removal efforts. As more information about climate change becomes available, they will also incorporate that information into their planning.

Smith contends, “Making sure interagency communication is happening and all eyes are on the ground means we can find new weeds early and respond before they spread. That’s half of the battle. By taking action on invasive plants now, we can help our region be more resilient to changes coming down the road. We’re working hard with all of our partners to protect our precious wild places.”