Assessing the Timing and Extent of Coastal Change in Western Alaska

Assessing the Timing and Extent of Coastal Change in Western Alaska

An interactive map based on four decades of satellite images helps residents, resource managers, and stewards of the land anticipate and plan for coastal change.

Alaska’s western coast has seen substantial changes in recent years.  During 2013, the Village of Shishmaref saw 60 feet of shoreline vanish in a single storm. Over a five-year period, storms also removed 30 feet of shoreline at an ancient Yup’ik village near Quinhagak, increasing the urgency of archeologists and the community to protect this historic site. And recently, storm surges have flooded portions of the town of Golovin so frequently that residents made a decision to relocate some of their essential infrastructure to higher ground. These events illustrate the vulnerability of western Alaska’s coastal communities and cultural resouces to rising seas and eroding coastlines. As the region warms—and sea ice and land-fast ice that once protected coastlines during extreme storms disappears—the impacts of coastal erosion will only increase. 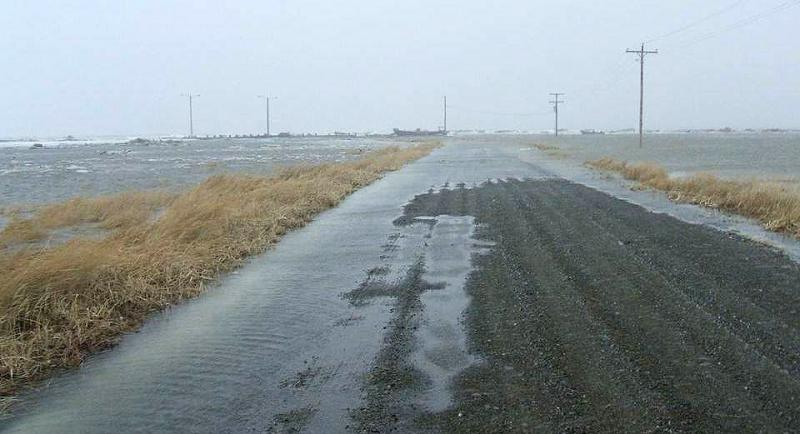 The combination of extremely high tides and southwest winds results in roadway flooding near Pilot Point, Alaska. Resident Sue Evanoff reported, "In 2014, we had to build a new section of road, because the erosion was so bad from the fall storms."

A 2015 report—Climate Change in the Bering Strait Region (PDF)—uses vivid photographs and direct quotes to document the vulnerability of Alaskan Native Villages to changing conditions. Residents' health and well-being are threatened by increasingly rapid changes that impact their daily lives. Coastal communities describe the unusual beach and shore erosion they have seen as potential health concerns: rapid changes along the coast can lead to injuries, reduce the stability of buildings, roads, and infrastructure for water and waste, and decrease food security. Coastal changes are also a concern for resource managers and subsistence and commercial fishing fleets. The extent of coastal change in the region has only been documented along short stretches of the coast, generally near communities, and the information is not always complete.

As the threat of coastal erosion increases along the thousands of miles of western Alaska’s coastline, communities, resource managers, and agencies that serve as stewards of the land need a way to monitor coastal change.

Issues of coastal change in the region fall within the purview of the Western Alaska Partnership, formerly the Landscape Conservation Cooperative (LCC). Until 2019, the LCC was one of 22 regional efforts across the United States launched to better integrate science and management in addressing climate change and other landscape-scale issues. The Western Alaska LCC was governed by a partnership of 14 state, federal, and tribal organizations with input from academia, agencies, non-profit organizations, consulting firms, and traditional knowledge experts.

In 2012, the Western Alaska LCC co-hosted a coastal hazards workshop with the Alaska Ocean Observing System and the Alaska Climate Science Center. At the workshop, a broad group of stakeholders identified their needs for information and tools that would help them understand and forecast how the coast is changing. The LCC sponsored or co-sponsored 17 projects to address recommendations offered by workshop participants.

One of the stakeholder needs identified at the workshop was for information that would enable decision makers to “assess changes in historic frequency, magnitude, and extent” of coastal erosion. To provide this capability, co-hosts of the workshop collaborated with Matthew Macander at ABR, Inc. to provide a coastal change map for the entire coastline within the LCC’s region.

Eyes in the sky 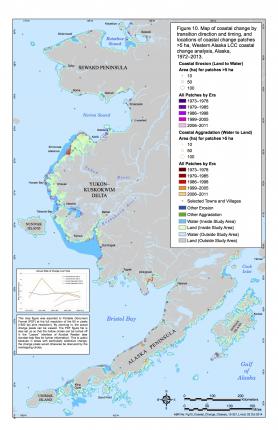 This figure from the Final Report shows areas of erosion and aggradation (deposition). Click the image for a larger view.

The collaborators developed a map of coastal change in western Alaska based on expert analyses of “before” and “after” Landsat imagery (see the Coastal Change Analyses for Western Alaska: Interactive Map tool in the sidebar). Analysts selected the best cloud-free satellite images from the Landsat archives from 1972 through 2013, and then analyzed visible differences to discern what changes had occurred in each decade over the 41 years. The project’s final map shows the extent and timing of coastal changes, detailing where erosion replaced land with water, as well as areas where deposition of sediments replaced water with land—a process known as aggradation.

The interactive map gives users a way to view portions of the time-series Landsat images as well as graphic layers from the image analyses. Users can find areas of extensive erosion along the coast and see when those changes occurred. They can also discern the timing and see the extent of areas where new land has built up near the mouths of rivers, or where lowland lakes and ponds have drained. Layers also show trends and “hotspots” where rapid or otherwise notable changes occurred—these flags can alert decision makers to areas they may want to monitor more closely.

A range of decision makers in western Alaska can use the tool to gain understanding of how coastal areas are changing and make plans for how they might respond. For example, vulnerable communities can identify stable sections of coastline where they could relocate essential infrastructure; archeologists can identify prehistoric sites that may be at risk; Alaska Natives can search for stable access to existing or new subsistence sites; and natural resource managers can make preliminary assessments of change to coastal habitats.

Publicly available since late 2014, the interactive map will be featured as one of the focus tools demonstrated at coastal resilience and adaptation meetings in several communities in western Alaska during the winter of 2015–2016. The large scale of the map and the careful image analysis layers will provide decision makers with information that can help them understand vulnerabilities and investigate options to build resilience to the impacts of coastal erosion.