Collaborating for Success: Sustaining Water Supply on a Pacific Island

Collaborating for Success: Sustaining Water Supply on a Pacific Island

As El Niño can bring severe drying conditions to the islands of American Samoa, groups collaborated to ensure that decision makers have access to the local climate and water data they need to recognize—and prepare for—the threat of drought.

Utu Abe Malae, Executive Director of the American Samoa Power Authority (ASPA), understands the importance of responding to early forecasts for El Niño events. On the seven islands that comprise American Samoa, the most notable impact of El Niño is drought, and the potential for a dimished supply of fresh water—any island’s most precious natural resource—is cause for concern.

When Malae learned of an incoming El Niño in 1997, he took preventative measures, advising the public about the potential for drought and encouraging residents to conserve as much water as possible. By the spring and summer of 1998, American Samoa was dealing with its worst drought in recorded history. Although conditions were severe, the impact to American Samoa water resources was not as intense as in previous droughts in 1974 and 1983.

The difference was due to ASPA’s water conservation practices and their increased development of groundwater resources. Unlike other Pacific Islands that imposed water restrictions at the time, the drought did not require water rationing in this U.S. insular territory.

Much of the success for mitigating a water resources crisis during the 1998 drought was the result of effective communication to the public and early forecasting by the National Weather Service and the Pacific ENSO Applications Climate (PEAC) center.

Together, the Weather Service Office, the Territorial Emergency Management Coordinating Office, and ASPA circulated water conservation announcements on radio and TV programs throughout the territory. This alerted the community and allowed them time to prepare for the potential of drought. Accurate drought forecasting relies on climate data and observations and, as shown during the 1997 El Niño, proved to be essential to preparing for impacts in the Pacific Islands. Though the island avoided water rationing in 1998, new challenges have surfaced since then. 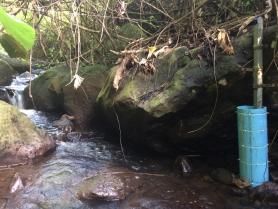 A stream and stream gauge on Tutuila Island.

As on all islands, American Samoa’s groundwater resources depend on rainfall. On Tutuila Island, where most of the territory’s population resides, groundwater stored in the freshwater lens—a layer of fresh groundwater that floats on top of denser saltwater—is the source for nearly all public drinking water supplied by ASPA.

Yet seawater located beneath the freshwater lens limits the rate that groundwater can be used in island settings. Salt water intrusion from over-pumping currently affects water quality in a number of Tutuila’s wells and aquifers.

Other threats to Tutuila’s water quality include contamination from wastewater disposal systems (septic tanks and cesspools), fertilizers and pesticides, and manure from piggeries. Adding to these existing challenges is uncertainty in supply, as American Samoa may experience more severe droughts over the next century—a potential impact of climate change in the central Pacific.

Even as threats to American Samoa’s water supply increased, the capacity to monitor the supply had drastically decreased. Since the 1960s, the U.S. Geological Survey (USGS) was the sole agency providing hydrological information in the territory, with a spatially distributed network of streamflow and weather stations. However, in 2008, a lack of funding caused the USGS to discontinue all hydrological monitoring in American Samoa, leaving a large gap in the territory’s water-related data.

To fill this need, the University of Hawaiʻi Water Resources Research Center (UH-WRRC) developed a new collaboration with ASPA. The agencies implemented a plan to continue monitoring efforts and to re-develop the instrument network with existing and new weather stations, stream gages, and water level monitoring sites.

Lessons learned from the data gap that began in 2008 are now being applied to the new program model, which is intended to be more robust in the face of an uncertain future. The researchers at UH-WRRC believe that providing technical support and training to local organizations responsible for their own monitoring networks will promote greater on-island capacity for the program, resulting in better chances for long-term sustainability. 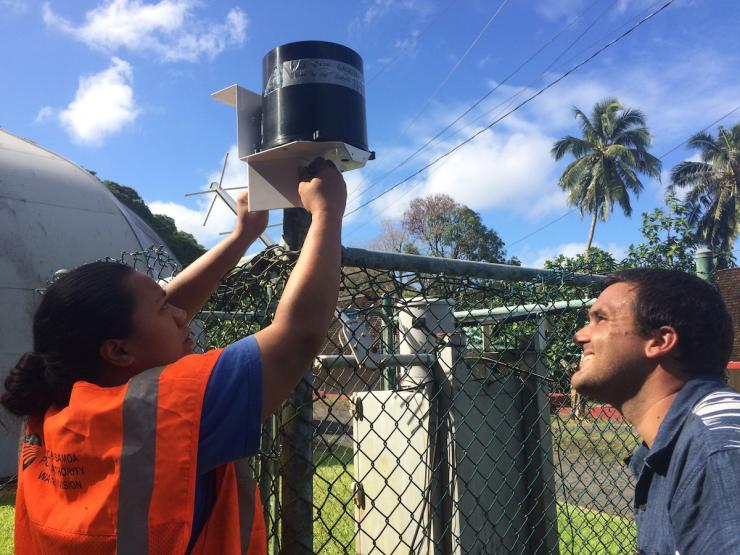 Tipping bucket rain gauges, such as this one being installed by ASPA staff and UH researchers, will monitor precipitation at ten sites throughout the island. 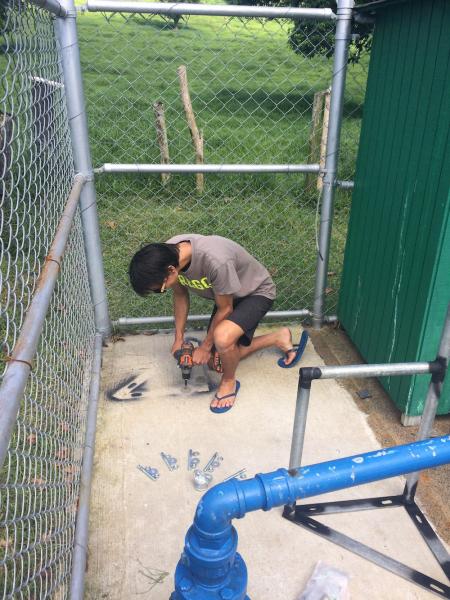 Christopher K. Shuler, a researcher and PhD student at UH-WRRC, emphasizes the need for hydrologic monitoring and data collection. He shares the same goals as ASPA Director Malae, and views better climate and watershed monitoring as essential to preparing for future impacts on water resources. The hard work and dedication of students like Shuler and his colleagues enables this collaboration with ASPA so that the island will be prepared to meet the challenges of climate change.

This initiative wouldn't have been possible without the support of Malae.  He saw the opportunity to team up with UH-WRRC as imperative for the protection of American Samoa's water resources. From the beginning, Malae became an advocate, as he understood the need to increase the capacity to gather reliable climate data in order to prepare for the impacts of climate change. Shuler describes Malae as “an exceptional leader, who understands, appreciates, and supports science. He is a forward thinker, who looks at problems and comes up with long-term solutions.”

Since 2014, ASPA and UH-WRRC have installed seven weather stations, eight stream gauges, and five water level monitoring sites throughout Tutuila Island. This network greatly expands the spatial distribution of weather data, which was formerly collected at just two long-term stations.  The hydrological monitoring network and weather data are available online from ASPA and Weather Underground. In the near future, researchers hope to provide online access to stream and groundwater levels as well. 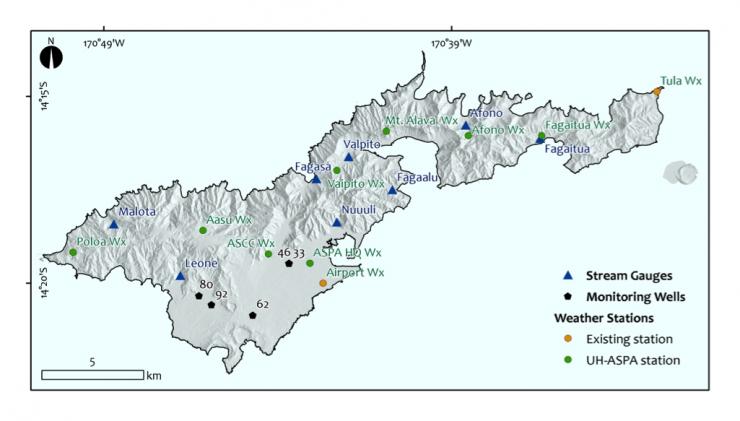 On islands throughout the Pacific, researchers and natural resources management agencies are looking to better understand water resources, learn new methods to mitigate drought hazards, and design engineering solutions to climate- and weather-related impacts. The collaboration described here may serve as a model for other islands.

In this case, UH-WRRC provides most of the instrumentation, technical training, data collection, and also builds models and data products to assist in water management. ASPA, meanwhile, has recently created a long-term monitoring technician position, as well as providing site access and logistics. ASPA benefits as the consumer of improved UH-WRRC models and other data products that enhance water management decision making and planning.

The project continues to seek opportunities to build local capacity to support maintenance and expansion of the network. These capacity-building activities include leveraging engagement by local stakeholders and involving student interns from the American Samoa Community College and local high schools to increase the community’s exposure to water research.

And though American Samoa’s isolated location presents a few challenges when it comes to project logistics, researchers at UH-WRRC are passionate about applying their continually growing experience to more effectively manage the nuances of working far from home. Developing long-standing connections with multiple on-island organizations and keeping a strong focus on stakeholder communication in American Samoa have alleviated logistical issues and enabled the team to successfully complete projects. 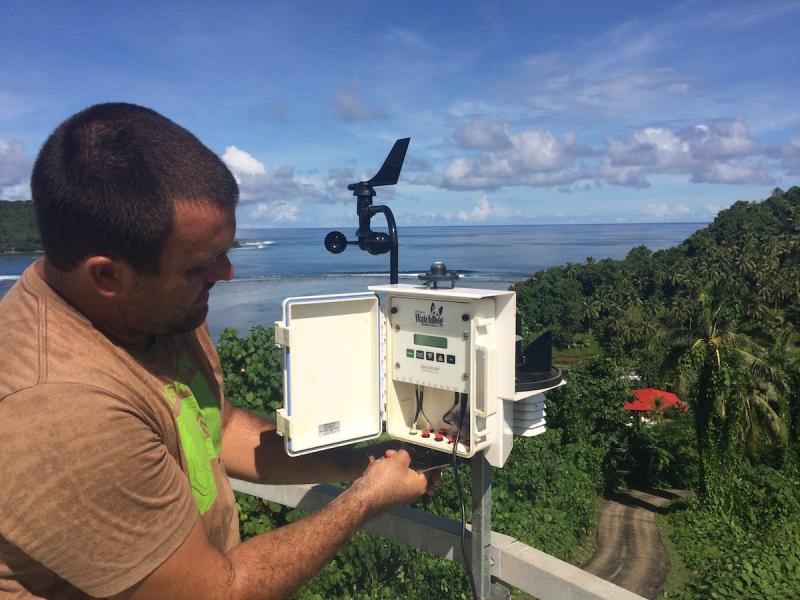 At the local level, stakeholders are generally supportive of the expanded climate station monitoring network. To build the project’s opportunities for long-term sustainability, Shuler hopes to connect this initiative more closely to the efforts of federal agencies, such as NOAA’s National Weather Service. With continued support, monitoring can support decision makers such as Utu Malae in addressing challenges and managing American Samoa’s most precious natural resource.