Each winter, massive waves attract surfers and visitors to the North Shore of O‘ahu in Hawai‘i. Some years, the waves cause severe erosion, and continuing sea level rise will accelerate this issue. Residents and the state are taking steps to preserve homes and beaches.

Surf and sand on Sunset Beach

Each winter, surfers from around the world flock to Sunset Beach on O‘ahu's North Shore. The huge waves that break along the beach during winter months have made it the home of the prestigious Vans World Cup of Surfing, and scores of visitors travel to the area for the competition or just to watch the massive waves. Over the years, most North Shore homeowners have become accustomed to the awesome display of waves breaking just offshore from their beachfront homes. 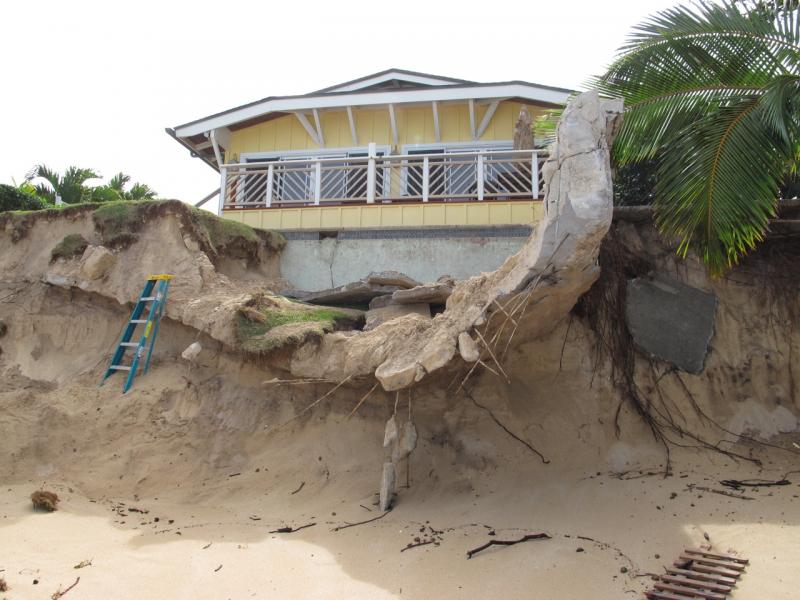 Intense waves and high sea level events contribute to coastal erosion, which threatened this house on the North Shore of O‘ahu.

Over the winter of 2013–2014, however, the ocean swells threatened disaster. The pounding waves and high tides caused severe erosion and loss of land in front of about 20 homes along Sunset Beach. To the people residing along the beach, the need to protect their homes was obvious. At the same time, local regulatory agencies were challenged with balancing public safety and protecting the natural beach environment.

Efforts to save beaches

For many years, the typical response to the threat of coastal erosion has been to protect the land by building a seawall. Over time though, this “solution” often leads to another problem—the loss of beaches. In Hawaiʻi, dunes and sandy plains provide a primary source of sand to sustain beaches where erosion moves them inland. When a retreating beach runs up against a hard structure such as a seawall, it has no place to go. Beach sands in front of the wall can erode away entirely, leaving adjoining beach areas and unprotected property vulnerable to accelerated erosion. Miles of beach on the island of O‘ahu have already been lost, and some 70 percent of beaches in Hawai‘i are actively eroding. 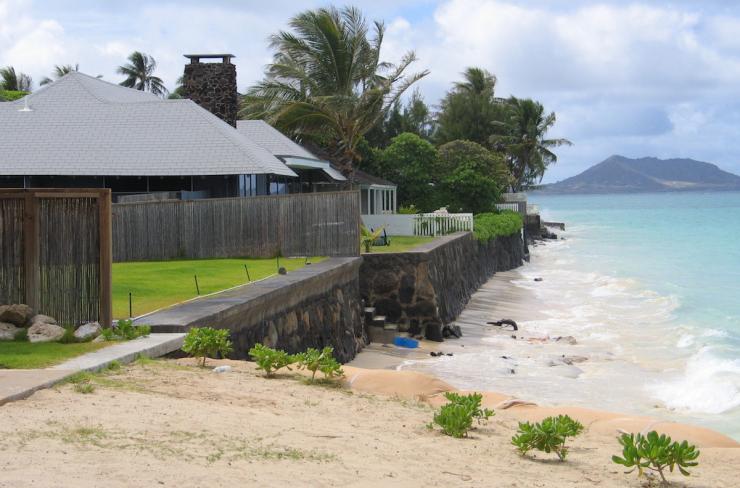 Coastal erosion and “hard armoring” using sea walls has resulted in stretches of shoreline that have no beach, such as this location at Lanikai, O‘ahu.

Activities at Sunset Beach contribute substantially to the North Shore’s economy. The beach also provides ecosystem services, such as wildlife habitat and storm surge protection. Losing the beach to erosion or a seawall could trigger a cascade of negative impacts.

Government agencies and homeowners from Sunset Beach sought guidance from Dr. Bradley Romine, a coastal geologist and coastal management specialist with the University of Hawai‘i Sea Grant College Program and the Hawaiʻi Department of Land and Natural Resources. Recently, Romine has grown accustomed to taking calls from homeowners when waves start eroding into their shorefront property. Where possible, he suggests ecological, or “soft,” approaches to shoreline protection as an alternative to hard structures. In answer to questions about the North Shore issue, Romine explained that soft approaches have the potential to protect homes while simultaneously preserving beaches. 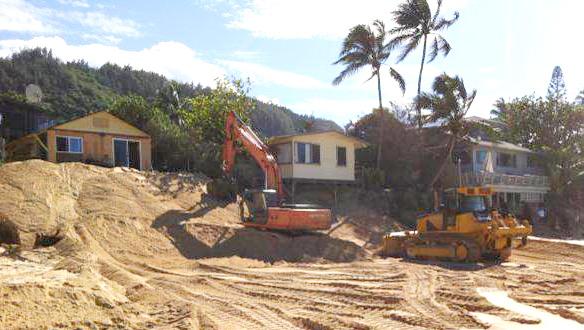 Construction equipment is used to restore dunes on the North Shore of O‘ahu. This is one example of “soft” alternatives to hard armoring that can preserve the natural character of beaches while protecting homes from damage during high wave and storm events. 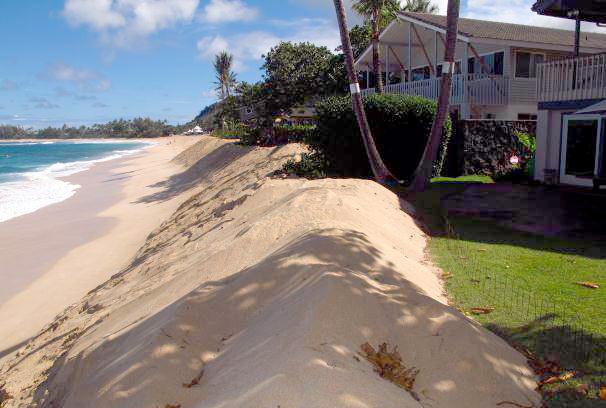 Historically, dunes had backed the beaches of the North Shore, but most had been built on or removed to make way for roads and housing developments. Following the winter of 2013–2014, Romine and his department assisted homeowners in obtaining permits to restore the sand dunes in front of their homes. In implementing the dune restoration, residents chose to maintain the beach and the key functions it serves at the same time as they protected their homes.

The 2015–2016 winter season was a test for the newly restored sand dunes. With massive El Niño-fueled winter surf hitting the North Shore, more than 11 miles of highway were closed for days due to wave overwash. Yet the sand dunes held, and the Sunset Beach homeowners who had opted for restoring the dunes were relieved to find that no structures were lost or permanently damaged.

Despite the success on Sunset Beach, the State’s coastal land managers know that repairing dunes is not a solution for every situation. On many eroded shorelines, there simply isn’t enough sand available to rebuild dunes, and outside sources of beach-quality sand are limited and expensive. Additionally, continued sea level rise will increase the intensity of impacts from storms and high waves.

“The frequency and severity of coastal erosion and flooding events are only going to increase in the coming decades with climate change and sea level rise, so improving coastal community resilience makes sense for the present and the future,” noted Dr. Romine.

The problems of shoreline erosion on the North Shore and around Hawaiʻi highlight how vulnerable the state’s communities and economy are to sea level rise and coastal hazards. The growing concern over threats brought by climate change has captured the attention of the public as well as elected officials, spurring a legislative response. In 2014, the State passed the Hawaiʻi Climate Adaptation Initiative. This legislative act declared that climate change is the paramount challenge of this century (State Act 83, 2014), and mandated the convening of a new Interagency Climate Adaptation Committee. The first task of the Committee and the Department of Land and Natural Resources (DLNR) is to develop a Sea Level Rise Vulnerability and Adaptation Report—a step ultimately intended to lead to a Climate Adaptation Plan for the State of Hawai‘i.

Romine and his colleagues, through Hawaiʻi Sea Grant’s Center for Coastal and Climate Science and Resilience, are providing a critical link between the latest science at the university and decision makers in government to inform the development of the State Sea Level Rise Vulnerability and Adaptation Report.  Through this successful university-government collaboration, Hawaiʻi Sea Grant, in partnership with the DLNR and State Office of Planning, secured additional funding through the NOAA Regional Coastal Resilience Grants Program to expand on the State’s work under the Climate Adaptation Initiative.  In addition to providing increased capacity for understanding coastal hazards and sea level rise vulnerabilities, the NOAA-funded project will provide a close examination of local government planning systems and disaster recovery processes for opportunities to improve resilience to coastal hazards and sea level rise.