A Coral Bleaching Story With an Unknown Ending

A Coral Bleaching Story With an Unknown Ending

Changing ocean conditions pose an increasing threat to the health and resilience of coral reefs. Across the two Samoas—American Samoa and the Independent State of Samoa—people are planning to protect these important ecosystems.

Just offshore from many Pacific Islands, coral reefs comprise some of the most biologically rich and economically valuable areas on our planet. Reef ecosystems support an array of striped, spotted, and camouflaged fish; soft-bellied and armored invertebrates; and hundreds of other life forms. Reefs also provide valuable ecosystem services that support island economies. 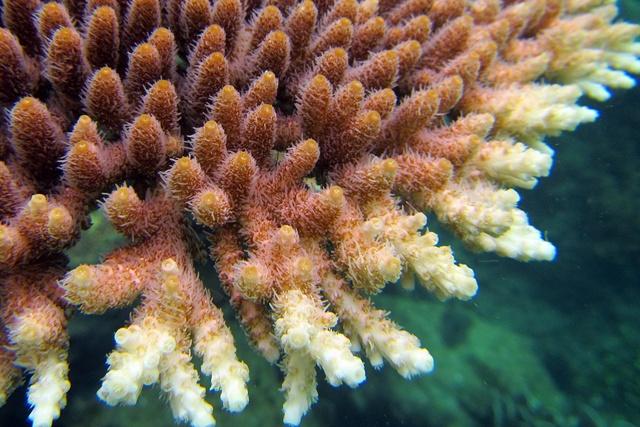 The center of this branching coral appears colorful and healthy, yet the outer tips are bleached white. Coral polyps on the outer branches have expelled their symbiotic algae, losing a source of food as well as their color.

Recently, changes in ocean conditions near some reefs have led to episodes of coral bleaching—periods when corals expel the algae that lives in their tissues, causing the corals to lose their color and potentially die. Naturally, island residents are concerned and want to protect the health of reefs near their islands.

Islanders can choose a range of responses to the threat of coral bleaching, depending on the severity of the event. For instance, they might increase community education to keep people off reefs while they are fragile, reduce land-based pollution sources that degrade water quality for reefs, or restrict fishing for herbivorous fish species, which promote coral health by reducing algae cover that could smother the living reef.

“We call the various responses a Choose Your Own Adventure novel,” said Kristine Bucchianeri, referring to the popular children’s book series in which the reader assumes the role of the protagonist and makes choices that determine the outcome.

Bucchianeri is the coordinator for the Coral Reef Advisory Group (CRAG) for the territory of American Samoa. The CRAG recently developed a plan that allows members to chose different actions depending on the severity of the bleaching.

“The territory decided—with some major coral bleaching events happening internationally—that we wanted to create a territorial coral bleaching response plan,” Bucchianeri said. The plan would address the diverse reefs of both American Samoa and the Independent State of Samoa.

Coral bleaching on the rise

Coral reefs get their structure from calcium carbonate skeletons built by tiny, individual coral animals. Corals are marine invertebrates that take their colors from symbiotic algae called zooxanthellae. The algae, which inhabit small cavities within the coral tissues, provide the coral with nutrients that they manufacture through photosynthesis.

It takes both coral and algae to build the foundation of reef ecosystems. However, the symbiotic relationship between coral and algae is fragile. When stressed, coral sometimes expels the algae from its tissues, though the action relieves the coral of one of its food sources. The now pale or “bleached” coral stops growing and may die, while the inhabitants of its once-vital neighborhood migrate elsewhere.

In the Samoa region of the western South Pacific, coral bleaching is often related to the warm phase of the El Niño-Southern Oscillation (ENSO), a climate phenomenon characterized by large-scale changes in sea surface temperature and sea level pressure across the tropical Pacific. The warm El Niño phase of ENSO brings higher water temperature and lower sea levels over Samoan reefs, which can expose them to air and increased sunlight and may result in bleaching. The strong El Niño conditions of 2015 resulted in major bleaching of some reef areas.

American Samoa Before and After 2015 Bleaching

The Samoan language has its own word for an El Niño bleaching event in which sea levels are low enough to expose corals to air: taisama refers to the stench of dying reefs that accompanies these events. The word may be uttered more often as climate change makes coral bleaching events increasingly common.

Bleaching is one of many threats to coral

The CRAG spent a year consulting with community members and agencies (see list of partners at right) to develop its draft plan. “From those conversations, we realized there were more threats to the coral in American Samoa, so we expanded our plan,” Bucchianeri said. Additional threats to reefs they identified were storm damage, coral disease, and higher-than-usual density of crown-of-thorns starfish, which prey on coral.

The CRAG’s Assessment and Rapid Reef Response Plan was published in 2013, but the group continues to update and expand it to address new findings and threats. “We refer to as a living document,” said Bucchianeri.

KEY MESSAGE
Commit to robust and sustained monitoring and assessment—the maintenance and expansion of existing
monitoring networks will lead to an improved ability to understand and predict a changing climate and
associated impacts over both the short and long terms.

CRW did not have local data for the Samoas, so local marine managers approached members of CRAG in June 2013. “We asked if it was possible to put in a virtual station for Samoa—just to monitor the sea surface temperature,” said Juney Ward, principal marine conservation officer of the Ministry of Natural Resources and Environment of Samoa (MNRE).

CRW did just that. Drawing on information gathered by satellites, the virtual station reports a local forecast for sea surface temperatures and a qualitative coral bleaching risk index that ranges from “No Stress” to “Warning” to “Alert Level 2.” This forecast gives reef managers a way to monitor local conditions and take steps to protect the reef when bleaching may occur.

The groups involved in protecting coral reefs in the region feel that coordination among themselves and with the public will improve bleaching responses. In March 2015, the CRAG and MNRE exchanged emails to assess conditions related to a rising coral bleaching alert level at the virtual station. “We just started to see some bleaching in the last month or six weeks,” said Bucchianeri that March. “The projected water temperatures are not very good for our coral.”

She added: “Some of our team were out to get baseline surveys on the areas we identified as priorities in the plan. They are assessing current baselines so we can measure the progression of bleaching.” Monitoring reef conditions both before and during bleaching or other reef threats helps the groups verify model forecasts.

Just as important, though, is community engagement. MNRE asks tour operators, fishermen, and recreational swimmers to notify them if they observe signs of bleaching or excessive numbers of crown-of-thorns starfish.

“We’re trying to build on and strengthen our collaboration with communities so when they’re seeing changes in their reef system, they can immediately inform us and we’re able to respond early and document these changes,” said Bucchianeri. “And also to help them realize that when we’re experiencing mass bleaching, there’s certain things that need to be done so that we’re not adding extra pressure to the reefs.”

KEY MESSAGE
Engage with the community and other stakeholders early and often—building community ownership and
participation from the beginning leads to more positive, sustainable outcomes.

The 2015 bleaching gave MNRE a sense of urgency for getting their own coral bleaching plan in place. It also gave the CRAG an opportunity to test and improve theirs. "This is the first bleaching event where we’ve actually used the Assessment and Rapid Reef Response Plan,” said Bucchianeri. “So we’re taking notes to see if it’s good, if it works, if it needs to be improved for next time. And we still don't know how the story will end.”