When a flood is forecast for the Red River of the North, community leaders, emergency responders, and residents around Fargo, North Dakota, and Moorhead, Minnesota, can gauge their need for preparation by accessing visualizations showing the extent, depth, and timing of expected flooding.

Flooding of the Red River of the North has repeatedly devastated homes and businesses in and around Moorhead, Minnesota, and Fargo, North Dakota. From 2009 to 2011 alone, three major floods caused more than $1 billion dollars in damage, impacting the lives and livelihoods of people across the region. As climate scientists project the frequency and intensity of flooding events to increase in many areas due to climate change, homeowners, businesses, and municipalities across the Red River Valley are eager for tools and information that can help them avoid damage and recover more quickly when flooding does occur.

While flood forecasts from the National Weather Service’s North Central River Forecast Center (NCRFC) provide solid information for flood emergency planning efforts, they are not presented in a visual format that is easily understood by the full range of individuals who might be impacted.

In response to the high frequency of flooding impacts, leaders in the region created the Red River Basin Decision Information Network (RRBDIN).  This network facilitates collaboration among various entities, enabling them to develop and offer tools that can improve resiliency to flooding. One such collaboration is a public-private (non-profit) partnership among the North Central River Forecast Center (NCRFC), the International Water Institute, and Houston Engineering Inc. Members of this group gathered a range of specific data to help residents prepare for flooding, and then packaged it into a web-based visualization tool called the Flood Forecast Display Tool (FFDT).

In 2009, Dave DeMuth, a resident of Moorhead, Minnesota, consulted the FFDT’s interactive map to display visualizations of the flood forecast generated by the NCRFC. He examined an inundation map, an inundation depth grid, and graphics depicting the estimated arrival time of the flood’s peak as well as flow conditions in and around the region for the flood forecast period. Using information from the tool, he was able to estimate peak crest height, timing, and the sand bag count needed to protect resources in advance of the flood. 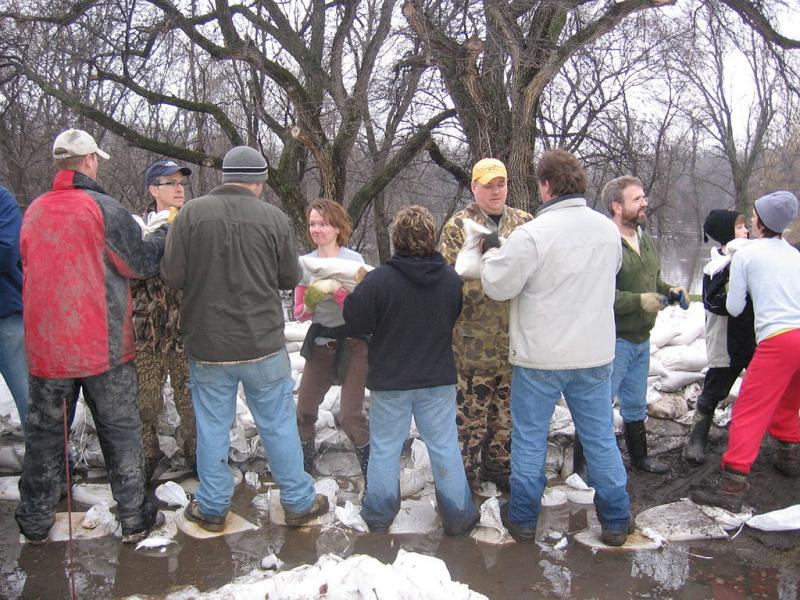 A line of volunteers moves sandbags to construct a dike in Fargo, North Dakota, in March 2009.

Armed with this information, DeMuth interacted with homeowners who were forecast to be impacted and discussed strategies for fighting the flood. The FFDT helped him estimate the amount of time, number of people, and funds it would take to fill the number of sand bags needed to protect various assets. This vital information helped many residents protect their homes and businesses in 2009 and again in 2010.

Private residents, emergency responders, agricultural producers, and small businesses can also use the FFDT to get a sense of how they may be impacted before flooding occurs. For example, agricultural producers in the Red River Valley can access the tool during spring runoff events to visualize if and when their lands are likely to be inundated by floodwaters. This information empowers them to choose and implement adaptive strategies that increase the resiliency of their operations. Private residents can search for their address and access visualizations that show the extent of inundation expected in their neighborhoods. They can also use the Sandbag Calculator to estimate the number of sandbags they will need to protect homes and businesses.

The FFDT continues to provide valuable information to people in the Red River Valley during flooding, and serves as a successful example of a public-private partnership that applies emerging web-based technologies to encourage resilient responses to flooding. Additionally, the partnership plans to continue improving the tool: by incorporating NCRFC ensemble stream forecasts, they plan to offer probabilities that an area will be inundated, similar to the format weather forecasters use when predicting chances for rain or snow.