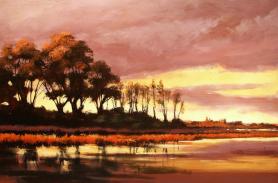 Beaufort County in South Carolina is located at the heart of the Lowcountry—a coastal region named for the fact that most of its land sits just above sea level. The county encompasses several of the Sea Islands, a chain of low-lying barrier islands that are separated by wide expanses of marshland and meandering creeks. Even the uplands of Beaufort County are low: two-thirds of these areas are within the 100-year flood zone designated by the Federal Emergency Management Administration (FEMA).

With the presence of a thriving Marine Corps training facility, a host of resorts, golf courses, retirement communities, and traditional African-American and Gullah/Geechee peoples, the population of Beaufort County has grown rapidly in recent decades. In planning for the future, community leaders recognized their potential vulnerability to long-term sea level rise and pressed for including the topic in the 2010 Beaufort County Comprehensive Plan. One of the recommendations in the final plan calls specifically for the county government to anticipate and plan for the impacts of climate change and sea level rise.

A participatory approach to adaptation

Tasked with implementing the Comprehensive Plan, Long Range Planner Robert Merchant began by forming a number of partnerships. Though some residents in the region were aware of the potential impacts of sea level rise, the topic was rarely discussed in the larger community. In order to raise awareness and encourage involvement, Merchant and the project team began the planning process with a collaborative opportunity for local stakeholders and scientific experts to learn from each other about the potential impacts of sea level rise on the county’s economy and society. 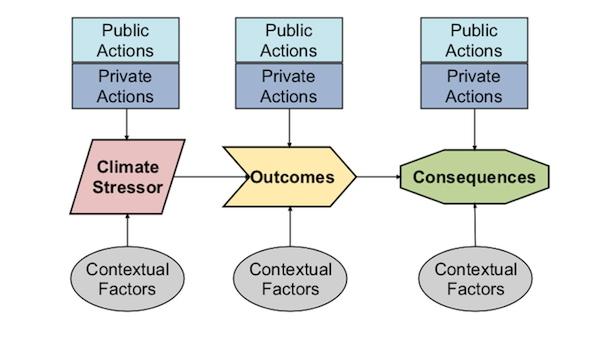 This diagram shows the building blocks of the VCAPS process used to document group dialog. In Beaufort County, decision makers used the process to document concern about sea level rise (climate stressor). A potential outcome of higher water levels is flooding of low-lying causeways, and a consequence of such flooding is reduced transportation connectivity. A contextual factor is that the region relies on these causeways for emergency evacuation. A potential public action identified through the dialog is to elevate critical routes.

To facilitate the project, the group used the Vulnerability, Consequences, and Adaptation Planning Scenarios (VCAPS) process. This tool provides a structured approach to help small groups organize and document dialogue and progress in understanding environmental hazards. Using the process, local stakeholders and scientific experts co-produce knowledge by discussing what the local vulnerabilities are, what impacts might look like in familiar places across the region, and what they can do to prepare.

The structured process helps the group capture key details of the conversation over time, including new perspectives added by participants who join the effort at different phases of the project. For example, the Beaufort County group consulted with a local realtor to gauge his response to a potential sea level rise hazard disclosure for home buyers, and his input was integrated with previous input.

Through the VCAPS process, the project team produced a list of actions that could bolster the county’s resilience to sea level rise. The team presented these actions at two public workshops to seek input from others in the community. After an introductory presentation and overview of sea level rise, participants split into small groups to discuss and suggest edits to the list of priority actions. Following the workshops, Merchant and the project team used the collaborative work of the community to generate a final list of 23 actions the county could take to improve its resilience to rising waters.

A menu of adaptation opportunities

Guided by input from stakeholders, the team drafted a report for dissemination throughout Beaufort County. The report cites data from the National Oceanic and Atmospheric Administration (NOAA), including trends of sea level rise over time. The report also shows output from visualization tools, such as the inundation analysis tool and sea level rise mapping tools. These helped readers identify locations with a high risk of tidal flooding. The report presents a broad menu of adaptation opportunities, describing the 23 actions in encyclopedia format, and also includes stakeholders’ comments and additional information such as case studies from other communities and links to tools and resources.

Beaufort County is using the report as a basis to begin the process of preparing for sea level rise. As a next step, the stakeholder group recommended that two other committees in the county begin to consider adaptation actions. Though these committees have yet to respond, the conversation on coastal resilience has begun and is likely to continue, thanks to the committed involvement of the project’s participants. Indeed, some community members who were involved in parts of the county’s collaborative planning process have already begun working with the City of Beaufort/Town of Port Royal Sea Level Rise Task Force.