Protecting Fish to Save Coral Reefs

Protecting Fish to Save Coral Reefs

Coral reefs off the west coast of Maui are readily accessible and heavily used by visitors and locals alike. Managers needed a plan to boost the resilience of the reefs so they could continue providing critical habitat for marine species.

Just beyond the sandy beaches, swaying palm trees, and inviting resorts on the west coast of Maui, the island’s tropical coral reefs provide habitat for an array of fish and marine species. In addition to providing shelter, food, and spawning and nursery grounds that fish need to survive, West Maui’s coral reefs provide visitors with a spectacular setting for swimming, snorkeling, and other ocean recreation. Additionally, among the island’s residents, recreational and subsistence fishers depend on the fish they take from the reef. 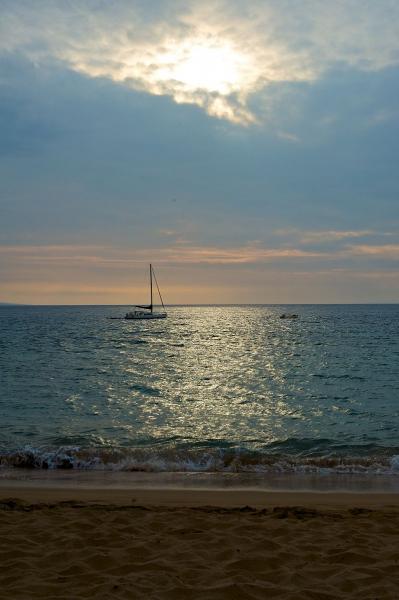 Afternoon sun at Ka'anapali Beach, on the west coast of Maui, Hawai'i.

Coral reefs are among the most biologically diverse and economically valuable ecosystems in the world. However, warming waters, unsustainable fishing practices, and pollution are threatening the health of reefs around the world, including those of West Maui. In the early 2000s, declining coral cover and recurring blooms of excessive macroalgae raised the concerns of marine managers. Documentation of the problem came from a long-term monitoring site near Maui’s popular Ka‘anapali Beach: coral cover in that location declined by around 40 percent between 1994 and 2006. Marine resource managers recognized that the impacts of climate change could only exacerbate the problem.

Declining reef habitats with excessive algae growth often indicate a loss of balance between factors that promote algal growth (pollution from sewage and fertilizers on land) and those that limit algal growth (grazing fishes and urchins). Managers wanted to find a way to shift the competitive balance back to favoring corals. To do so, they needed to reduce the impact of some or all of the factors promoting the growth of algae. If they couldn’t reduce algae, they had no prospect for improving coral resilience in affected reef areas.

One management strategy proposed by the Hawai'i Department of Land and Natural Resources involved changing fishing rules to protect the fish and urchins that feed on the algae. They reasoned that if the numbers of these herbivore species increased, they would help control the excessive macroalgae.

The Department of Land and Natural Resources compiled information on the status and trends of Maui’s coral reefs and the details of their proposed herbivore enhancement project. They shared the information with the public in a series of 16 presentations and events, reaching more than 800 of the state’s residents. Outreach personnel focused most of their efforts on concerned residents from West Maui. The Department also made extra efforts to engage the native Hawaiian community, and to involve the individuals who would be most affected by the proposed rules.

The Department chose to test their herbivore protection plan in the Kahekili Herbivore Fisheries Management Area (KHFMA). The site was chosen, in part, because immediate action was needed to arrest the decline of the North Ka‘anapali reefs. At the time, the waters offshore from North Ka‘anapali Beach and the Kahekili Beach Park had no special marine management or protection.

The proposed rule established a Fisheries Management Area designed to restrict extraction of herbivorous fish and invertebrates from the reefs. Three families of algae-grazing fish were included: surgeonfishes, parrotfishes, and rudderfishes. The proposed rule made it illegal to injure, kill, possess, or remove fish in these three families from the management area. In addition, all urchins were protected from harvest, and the practice of fish feeding was banned. In all, these management actions were expected to result in meaningful increases in herbivore fish and urchin populations. Over a five- to ten-year time frame, the Department expected the proposed management action would result in a healthier living coral reef ecosystem.

Surgeonfish and parrotfish are among the algae-grazing fishes protected in the management area.

While local perception of the plan to protect herbivores was not all positive, fishers who recognized its potential to help maintain the local reef and the services it provides gave the plan considerable support. Spear fishers who had seen the degradation on the reefs first-hand were among the strongest supporters. Local Hawaiian subsistence fishers from the area also supported the plan, in part because it could help them meet their goal to preserve resources for future generations.

The KHFMA—the area where herbivores are protected—was established in 2009. While it will take several years before managers can judge the overall effectiveness of the management actions, they have already seen some positive changes in the health of the reef ecosystem. Specifically, mean parrotfish and surgeonfish biomass within the KHFMA both increased by 2015, by 139 percent and 28 percent respectively. Additionally, cover of crustose coralline algae—the substrate on which coral larvae have the most success to settle and grow—increased from ~2 percent in 2009 to ~15 percent in 2015. Macroalgal cover has remained low throughout the monitoring period.

In the long term, health of local reefs and their resilience to additional stressors will also depend on changes to land-use practices. Excessive nutrient loads from agriculture and landscape fertilizers, sewage injection wells, and other sources still stream into Maui’s nearshore waters. Despite remaining challenges, the Kahekili Herbivore Fisheries Management Area serves as a positive example of collaboration between a state agency and a local community, and the two continue working together to increase the resilience of their coral reefs.