In July 1999, the small city of Two Harbors, Minnesota—situated on the shore of Lake Superior about 25 miles north of Duluth—was devastated by a 100-year rain storm. The city sustained significant damage to roads and highways, other infrastructure, and private property. To make matters worse, streambank erosion and polluted runoff threatened to contaminate the water supply, necessitating additional treatment. 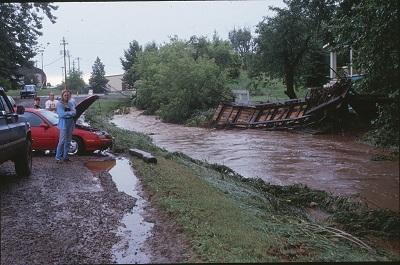 Flooding in Two Harbors after the July 1999 storm.

Multiple reasons can be cited for the extent of the flood damage. Logging, railroad development, and upstream urbanization had altered the hydrology of the surrounding Skunk Creek watershed, and the amount and velocity of runoff from the landscape into Skunk Creek, a tributary that runs through the city, had substantially increased over the previous century.

Whatever the underlying reasons, the destruction from the flood instigated a call to action among city officials, who understood that this flood would not be the last of its kind.

Staff at the Lake County Soil and Water Conservation District and the University of Minnesota Extension program assembled a team to create a stormwater management plan for the city. With the assistance of a grant from the Minnesota Lake Superior Coastal Program, the plan was completed in only two years.

But they didn't stop at planning. Over the next 10 years, the stormwater team in Two Harbors continued to plan for, and take action to build resilience against, future floods. 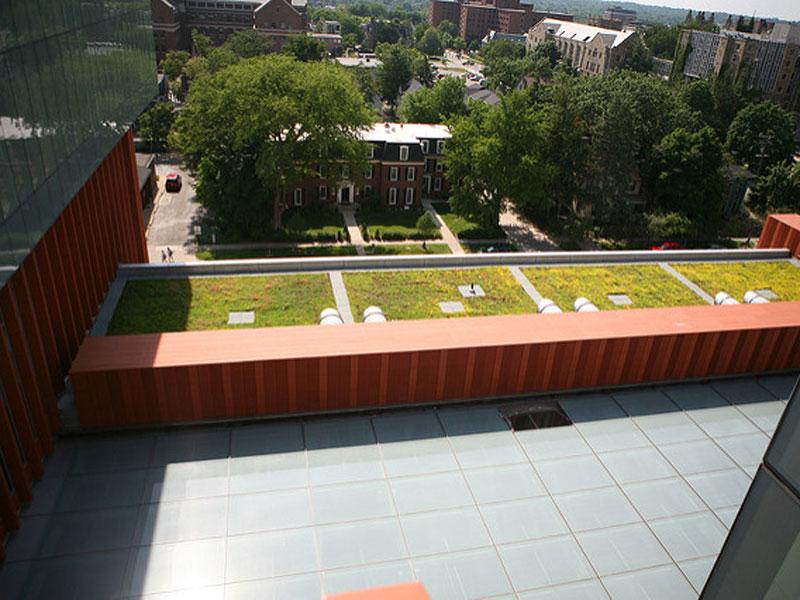 A green roof at the University of Michigan's Stephen M. Ross School of Business.

Implementation of green infrastructure often relies on Low Impact Development (LID) strategies. These strategies funnel water through natural channels and connect open spaces to increase capacity for water storage; their goal is to mimic the region’s hydrology as it was prior to human disturbance. Examples of LID structures include rain gardens, sand filters, infiltration trenches, permeable pavements, green roofs, and detention ponds. In some cases, the existance of aging grey infrastructure can hinder community's abilities to install new LID structures; some communities choose to retrofit existing grey structures with green infrastructure as a cost-effective alternative.

Flood control structures are another viable option for stormwater management. These structures include any type of infrastructure intended to adjust stormwater conveyance or change an area's capacity for water storage. Their purpose is to reduce peak flows during a flood event by lowering the rate at which water flows through the system. Depending on their function and construction materials, flood control structures can be categorized as either grey or green infrastructure, but since they are often built using concrete, they are usually considered as grey.

When undertaking major stormwater system improvements, a community's approach tends to be driven by local challenges and the available budget, and implementation typically involves a combination of flood control structures, retrofits, and LID.

Two Harbors' stormwater management plan had two main goals: to control the pollution level and turbidity of water entering Lake Superior, and to better prepare the town to withstand damage from future flood events. To accomplish these goals, Two Harbors planned and implemented a combination of retrofitting, LID, and flood control structures. 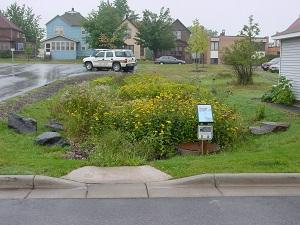 The rain garden installed at the Lake County Courthouse in Two Harbors.

The natural features of a watershed are a huge factor dictating which stormwater management methods will work effectively. Soil quality and type, for example, affect the rate at which water infiltrates into the ground. The region surrounding Two Harbors has underlying heavy clay soils, which have low infiltration rates and low capacity for storage. This fact meant the community would need to find supplementary space for stormwater storage within the watershed. Topography also influences the type of LID technique that may be needed. Moderately steep hills, such as those found in the region surrounding Two Harbors, require methods that can reduce the velocity of water flowing downhill and increase upstream storage.

Given the regional soil type and topography, three flood control basins were planned and built in the upper areas of the watershed to slow water on its way downstream. The predominantly green infrastructure was designed to diminish the amount of runoff, sediment, and other pollutants entering Lake Superior.

All together, the town invested $80,000, some of which was matched by competitive grants, to build their stormwater infrastructure. The effort included the three flood control basins, two streambank stabilization projects, and a rain garden. They also developed an Urban Forest Management Plan that emphasized stormwater management.

Now that's a return on investment!

In most cases, retrofitting and LID-managed green infrastructure requires less maintenance and generally costs between 15 and 80 percent less than grey infrastructure. Green infrastructure can also reduce municipal water treatment costs by reducing pollutant loads. Co-benefits can include an increase in property values by improving aesthetics and adding recreational benefits.

In June 2012, northeastern Minnesota saw 8–10 inches of rain fall onto already saturated soils in just 48 hours, resulting in what is now known as the "Solstice Flood." Regional damage to infrastructure was estimated at $100 million, but Two Harbors came out of the storm with only minor damages to public infrastructure and private property. Again, in October 2018, another heavy precipitation event left other cities and towns in the region facing a total of $18.4 million in storm damages, while Two Harbors’ new stormwater infrastructure left it "mostly unscathed," according to NOAA's Office for Coastal Management.

Taking the time and making the effort to fully understand the value of both green and grey infrastructure can help communities determine the mix that will generate its own highest return on investment.

Resolving landscape-level problems can require multiple solutions to address the range of social, financial, meteorological, and geological factors involved with stormwater flooding. Additionally, the development of resilient stormwater infrastructure demands a substantial investment of funding and community engagement. Many communities reach out to consulting engineers to help them develop a sustainable, long-term plan. Recommended projects can take decades to implement, requiring strong relationships among planners, decision makers, managing agencies, and other stakeholders.

1. Connect | with city officials, interest groups, and concerned citizens to start a dialogue around the issue and encourage grassroots support

Important partners might include natural resource managers, planners, utility commissions, watershed alliances, community groups, local decision makers, residents, county and state agencies, and regional non-profits, some or all of whom may not be used to working with each other. Choosing the right moment can help to increase success in building a team. In Two Harbors, the July 1999 flood event served as a catalyst for a large-scale initiative.

2. Coordinate | all partners who should be present to implement the project at the right scale

Identifying and involving the partners who have influence and/or expertise during particular phases of the project can help ensure that the entire project is successful. For example, the Two Harbors stormwater initiative brought in Lake County’s master gardeners and others to help design and construct the courthouse rain garden. This also helps build a sense of ownership by project partners.

3. Capitalize | on opportunities when they become available

Funding is commonly cited as a barrier to the implementation of stormwater management projects. While competitive funding is often difficult to obtain, some techniques can increase the likelihood of funding awards. The Two Harbors team, for instance, were flexible as to the order in which projects would be implemented under the plan, enabling the team to take advantage of grants as they became available. Additionally, project partners took on grant-writing tasks that would normally have been handled by city staff, working under a champion who volunteered to do so. Partners also worked to ensure that all projects were completed well and on time. All of this helped to establish strong relationships between the city and project funders—also increasing the likelihood that funding agencies would continue to work with the city on future projects.

4. Communicate | impacts and outcomes to partners and the general public

Continual, effective, and interactive communication helps ensure that implementing green infrastructure remains a community priority. Two Harbors accomplished this by providing tours to any interested parties and promoting funding entities’ contributions. They also worked with local media outlets to showcase progress and hosted meetings to educate residents about the projects. Project managers did not let anyone lose sight of the project, guaranteeing the update would not lose momentum before completion.

Keeping an eye on the future

In 2016, to improve water quality of runoff from the Skunk Creek watershed, Two Harbors began focusing on eliminating invasive buckthorn, planting more trees to reduce runoff and erosion, and reducing occurences of E. coli contamination in areas of the watershed.

The county watershed management plan was replaced by a watershed-level plan for Skunk Creek, and a cooperative effort between Lake and Cook Counties resulted in the development and adoption of the Lake Superior North "One Watershed, One Plan" Comprehensive Watershed Management Plan (PDF) in 2017. As the counties transition to comprehensive watershed planning processes in all watersheds, the watershed-scale plans will eventually replace the local management plans. The new comprehensive plan is based on scientific principles and extensive watershed modeling, and is designed to operate on a 10-year schedule with annual assessments and a five-year review.