Shoreline property owners weren't sure how changes they needed to make to adapt to rising sea level would look. Maryland Department of Natural Resources staff found a way to create visualizations illustrating the likely visual impact of living shorelines.

Shoreline erosion and its negative effect on water quality have long been recognized as an environmental issue in the Chesapeake Bay. In response, some property owners along Maryland's shore built "hard" structural solutions to hold their land in place. Over time, it became clear that this solution introduced a different set of problems: the hardened shorelines changed natural patterns of sediment flow and reduced the quality of water draining off the land. Eventually, the hardened shorelines degraded habitat for fish and wildlife and reduced coastal protection from storm surge and flooding. 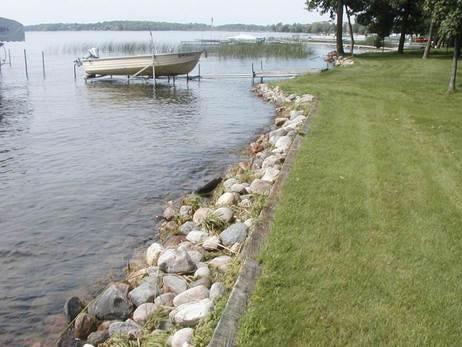 This image shows rocks along the shoreline.

In 2008, the Maryland Commission on Climate Change recommended that the state begin to address the impacts of shore erosion induced by sea level rise. That same year, the state passed the Living Shorelines Protection Act, requiring the use of nonstructural shoreline stabilization methods in tidal wetlands.

The goal of the Living Shorelines Protection Act is to reduce shoreline erosion in waterfront properties, promote natural coastal processes, and enhance habitat creation and restoration. The Act encourages shoreline property owners, contractors, and others to forego hard structures such as seawalls and instead adopt “living shorelines.” These projects are typically composed of marsh plantings combined with sills, groin fields, or breakwaters. 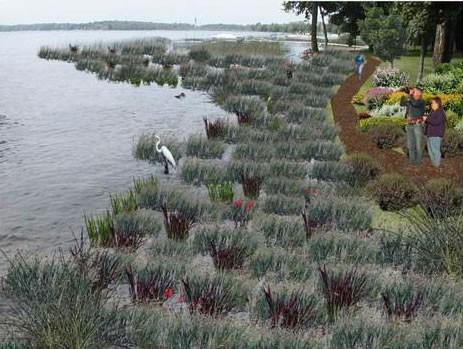 The CanVis visualization shows the likely visual impact of a living shoreline in the same area pictured above.

In order to produce visualizations illustrating how living shorelines might look and function, personnel in Maryland’s Department of Natural Resources (DNR) took an online course to learn how to use CanVis—free visualization software that enables users with minimal computer skills to produce realistic simulations of coastal changes. The online course, available through NOAA’s Office for Coastal Management, helps participants use CanVis to modify digital photographs to show potential changes. Together, the original photo and the visualization from CanVis represent “before” and “potential after” views of the same scene.

Following the online course, Maryland DNR personnel visited shoreline property owners who had expressed concern about changes to their shorelines. The DNR staff members took photos of the properties, and then modified them using CanVis. The visualizations they produced illustrate the likely visual impact of living shorelines on these specific properties.

Many landowners, builders, and contractors who had previously expressed concern about living shorelines have come away from CanVis presentations feeling reassured and better informed. Seeing a visualization of the likely change in advance of starting a project takes away some of the uncertainty.

The following image and instructions give you an opportunity to explore map layers depicting assets and climate threats in the area described in the case study. You can use this as a model to explore similar issues in your own locale.