What if it Happened Here? Boston Takes a Lesson From Houston’s Hurricane Harvey

What if it Happened Here? Boston Takes a Lesson From Houston’s Hurricane Harvey

Faced with the possibility of a storm similar to Hurricane Harvey hitting Boston, the City Mayor had city planners evaluate the resilience of the city's stormwater system to a 500-year storm.

A disaster sparks an awakening

When Hurricane Harvey hit Houston in 2017, the mayor of Boston asked “What if it happened here?” 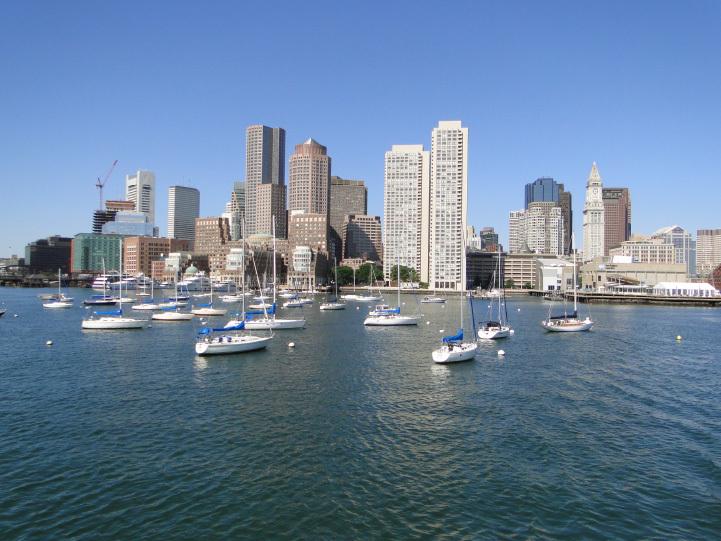 In response, the Boston Water and Sewer Commission launched an in-depth analysis of the impact of large storm events. They specifically considered a 500-year storm such as Harvey to assess the system's ability to discharge stormwater during heavy rain events that occur in conjunction with high tide and storm surge. Analysis questions included: where in the city would inundation occur, how long would it last, which areas would require relocation of residents and to where would they be relocated?  In other words, how could the City of Boston prepare for this type of storm and how would the City handle it if it did occur?

A leader in municipal climate resilience

Boston, a recognized leader in addressing the existing and potential impacts of climate change, included an evaluation of future climate change in their 2015 revision of the Commission’s Water and Sewer master plan. Using this plan as a springboard, and realizing that intense events such as Harvey could become more of a norm than an anomaly, the Commission set out to evaluate potential storm impacts in 2030 and 2070.

A model to inform stormwater resilience

This visualization of a flooded street in Boston was produced using the new stormwater model.

The engineering firm contracted to upgrade the existing one-dimensional sewer and drain model developed a two-dimensional dynamic model, fed by data based on thunderstorms, frontal storms, tropical storms, and Nor'easters observed in the area. The addition of a novel dynamic coastal model augments planners ability to perceive consequences of storms, and ensures that the final model output covers a range of future storm scenarios. To address a growing concern that sewer outfalls could act as conduits for water to back up into the city, the engineering team also added a mesh to the model to produce visualizations of how water spreads across the landscape and interacts with the city’s sewer system in the different scenarios. An interactive model viewer interface visually conveys what the numbers mean through a 360-degree “Google Earth” style view at the streetscape level. Climate analyses data collected by Woods Hole Oceanographic Institution for the Massachusetts Department of Transportation was also incorporated into the model.

To further inform a path to citywide stormwater resilience, the updated model also identifies the location of critical facilities that could be affected, and conveys information on how water could flow inland from a storm coinciding with storm surge and higher sea level. Using this new model, the Water and Sewer Commission and other city departments can explore ideas about the location and design of tide gates to ensure that water can continue flowing out of the city while preventing additional water from flowing in. 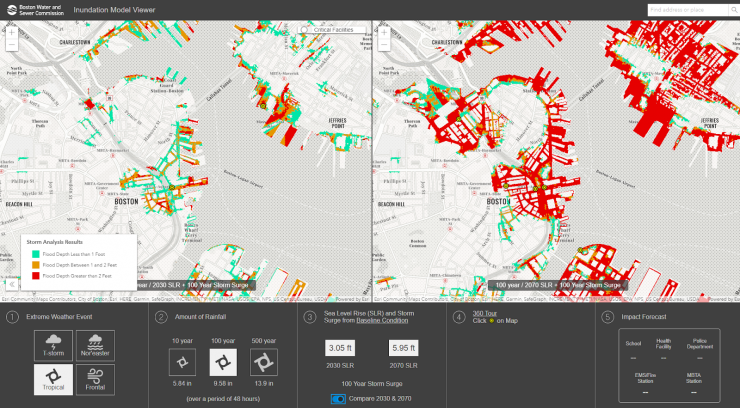 Inundation model for a 100-year flood in the City of Boston.

Keeping stormwater in the ground

This new stormwater model is just one part of the city’s multi-pronged approach for managing rain and storm events, all the way from relatively mild events to worst-case scenarios. To address runoff during high precipitation events, a range of Green Infrastructure projects allow the city to meet their goal of limiting phosphorus total maximum daily load (TMDL) on the Charles River. The City’s and Commission’s regulations also require new or rehabilitated structures to retain 1 inch of rain on site. If a project exceeds 100,000 square feet, the project must retain 1.25 inches of rain on site. While improving stormwater quality, these systems also reduce the volume of stormwater entering the storm drainage system. The Commission is also looking at sites that could potentially serve as temporary water catch basins during major events.

Looking to the future

With an eye on the future, the Commission is investigating the use of sensors to create ‘smart sewers’ which can help them analyze how the storm sewer system functions during different wet weather events. The city also recognizes they may need more pump stations to complement the nine that currently exist, and they are using the new stormwater model to determine potential locations for new facilities. To date, the City has only evaluated the stormwater system's performance in coastal areas, inland waterways and outfalls are next on their list.