Reduced flows and increased demand for Colorado River water represent a real and present danger in the West. To address the threat, water managers and modelers initiated a study to understand the system, consider options, and take action.

If you live in or visit Nevada, thank the generations of water planners who made it possible to turn on the lights or drink water from a tap. Then give thought to the new realities their modern counterparts must address: water demand is outpacing supply, and the problem is likely to worsen if the imbalance isn't addressed.

In the days when the West’s major dams and hydroelectric plants were built, planners were optimistic that the climate conditions of their day would sustain residents and settlers for the foreseeable future. Today, water managers throughout the West are facing different climate conditions and, therefore, a different vision of the future. From the Front Range of Colorado to San Diego, water professionals are well aware of impending shortfalls in water supply paired with growing demand. Together, these forces pose a formidable threat to the regions's water resources. 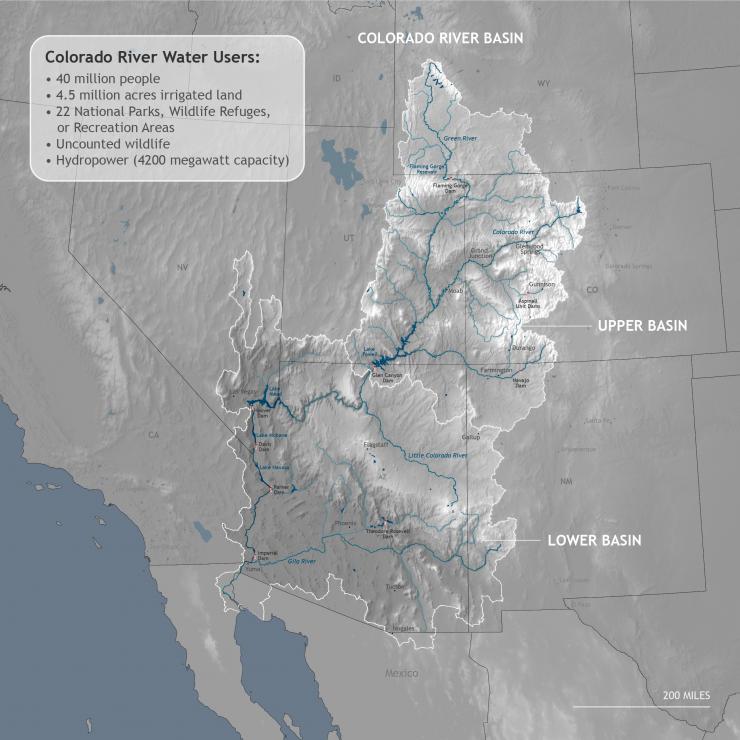 The Colorado River system spans seven states. The Upper and Lower Basins of the river provide water, food, recreation, and electricity for millions of residents and visitors.

In 2010, federal and state partners joined forces to study the Colorado’s likely flow and uses out to 2060. The U.S. Bureau of Reclamation led the effort, and all seven states spanning the watershed contributed resources such as funding, time, and expertise. To address the uncertainty inherent in how a region as geographically and socially complex as the Colorado River Basin might be affected over a 50-year span, the partners explored distinct water supply and demand scenarios. What action could basin partners take individually and collectively to mitigate and adapt to the risks of decreased supply and the great uncertainty in river flows? Noting that past generations had been overly optimistic about projected flows, today’s water planners do not want future generations to inherit plans and infrastructure optimized for river levels rarely seen due to changes in climate and water demand. How effective would those actions be? What would the tradeoffs be? Study partners needed very specific data and information to begin the process of evaluating those decisions.

Studying a system as large and complex as the Colorado River Basin required innovative thinking and new tools. The Colorado River Simulation System, the Bureau of Reclamation’s primary tool for studying river operations and the potential impacts of projected water supply and demand, gave partners a way to examine over 100,000 simulations. Understanding such a large volume of data required new techniques as well. The RAND Corporation assisted in assessing resource vulnerabilities across these simulations. Collaborators used the free statistical package “R,” which allows researchers to share code and results easily because it is non-proprietary. Another tool, Tableau®, helped study partners interact with visualizations and summaries of the results.

This approach enabled study partners to contextualize and understand results from 112 global circulation model runs, which were developed for the fourth assessment of the Intergovernmental Panel on Climate Change. The median outcome suggested that a nine percent reduction in river flow is possible by 2060. Of course, some models suggested the possibility of an even greater reduction. In the median scenario, droughts that last five years or longer would span almost half of the next 50 years. Overall, comparing the median projection for river flows to projections of future water demand, the Colorado system could see an annual shortfall of 3.2 million acre-feet by 2060. That’s more than ten times Nevada's current yearly allocation of water!

The overwhelming conclusion from this massive research effort was clear: in the absence of new actions, all resources that depend on fresh water within the basin are at increasing risk over the first half of the 21st century. In addition to the decline in drinking water, other essential services—including hydropower production, recreation, water for irrigation, ecosystem functions, and flood control operations—would all be compromised if climate models have correctly captured the trajectory of the watershed’s hydrological changes over the next 50 years.

With so many challenges, Colorado Basin stakeholders needed to explore diverse ideas for reducing risk and vulnerability. Study partners hosted webinars to present results and gather perspectives about the study. They later distilled public comments into 30 options spanning those that would increase supply, reduce demand, modify operations of reservoirs, and change governance rules for water usage at local to regional scales.

Some of the changes people suggested had price tags. Others involved behavior change and therefore could not be measured in financial terms. Armed with both quantitative and qualitative data, study partners gauged the risks associated with the options they had catalogued. Some options would be very costly, while others would be less expensive. Some would not likely yield a payoff for years or decades, while some decisions would almost certainly improve water security in the short term.

The study authors wanted partners and concerned citizens to understand the implications of all of these data and choices, so they took great care to translate the science into specific impacts that people could understand, including decreased drinking water availability, water for irrigation, flood control, recreation, energy generation, and the ecological functions of the river system.

Partners throughout the Colorado Basin have long understood that these ideas are more than academic—they translate to dollars and ways of life throughout the West. Prior to the 2012 Bureau of Reclamation study, the Southern Nevada Water Authority decided they needed to construct a new water intake to pump water from Lake Mead to ensure water remains available for their two million residents and forty million annual visitors. The project was completed during the summer of 2015. Work is now underway to construct a station capable of pumping water from extremely low lake levels. That’s a total investment approaching $1.5 billion. 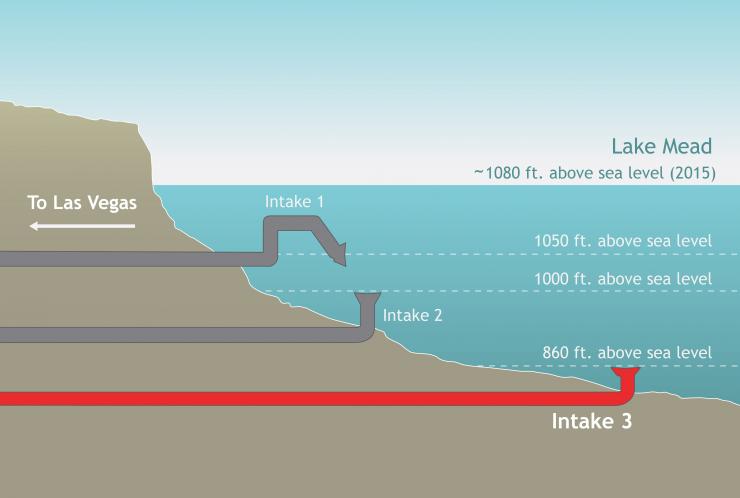 This schematic diagram shows the elevation of three water intakes that move water from Lake Mead to the city of Las Vegas.  The newest intake—Intake 3 in the diagram—is approximately 220 feet below the lake's 2015 surface elevation.

The Southern Nevada Water Authority has invested heavily in reducing risks due to warmer temperatures, less snowpack, and lower water levels in the Colorado River. Most scenarios for the future suggest critical thresholds for minimum precipitation across the upper and lower basin will be exceeded repeatedly over the next 50 years. As grim as these realities are, the Colorado River Basin Study showed that vulnerabilities can be reduced by perhaps 50 percent if aggressive measures are taken—much like those taken by the Southern Nevada Water Authority—to manage existing infrastructure, regulations, and water use.

By 2060, costs for adaptation measures that will enable water managers across the West to continue serving customers are clearly going to be in the billions of dollars. To foster collaboration and dialogue about complex decisions across the basins, the Bureau of Reclamation initiated an ongoing process in 2013 called “Moving Forward.” This exercise can support resilience of water supplies across the Colorado River Basin by bringing data and information to the attention of relevant decision makers.

The Colorado River Basin Study and the actions people throughout the basin continue to take prove that robust, quantitative data and realistic scenarios about the future are invaluable for focusing decision makers’ attention on effective action they can take today to improve their resilience tomorrow.