Staying Even with Mother Nature

Staying Even with Mother Nature

On the southeastern shore of Lake Michigan, the city of St. Joseph is vulnerable to flooding from storm surges. Residents and city officials recognized the need to build resilience and worked together to enact a "no-build" ordinance to help minimize coastal erosion and retain beach access.

Storm surge: a beachfront threat on the Great Lakes 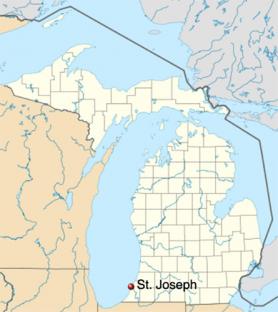 As a beachfront city on the southeast shore of Lake Michigan, the city of St. Joseph is at risk of flooding from storm surge. When storms blow into the region from the northwest, massive waves—built by winds traveling up to 150 miles across Lake Michigan—can push huge volumes of water onto land, resulting in catastrophic flooding and damage to coastal properties and roads.

A storm surge forms when strong winds blow across a large expanse of water: a broad area of higher water levels develops and travels in the same direction as the wind. If the area of high water reaches a shoreline and is pushed ashore, widespread flooding occurs. (To learn more, visit our Storm Surge page.)

To harden the shoreline—or not?

In 2012, more than 8,300 people lived in St. Joseph. Although the footprint of the city itself is only 4.8 square miles, it encompasses the St. Joseph Harbor, the St. Joseph River, and miles of shoreline that are generally maintained for public use despite being privately owned. 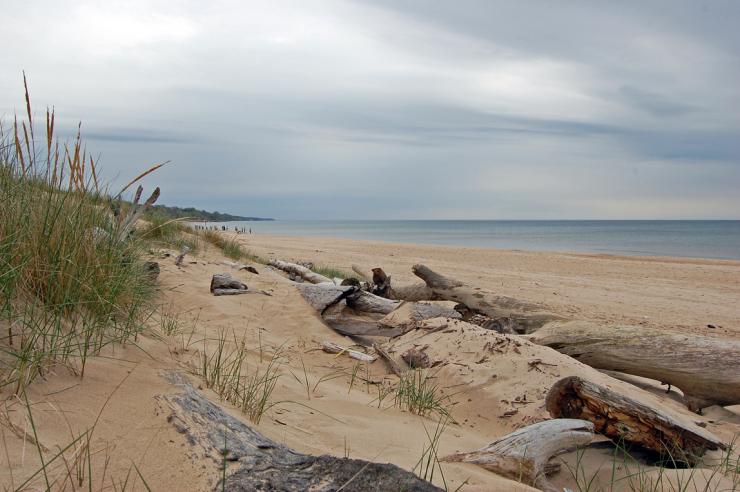 In the fall of 2011, the owner of a Lake Michigan beachfront home recognized the risk of storm surge for his property and applied to the Michigan Department of Environmental Quality for permission to build a 145-foot-long, 10-foot-wide seawall. The proposed structure would minimize the risk to his home and property, yet leave neighboring properties exposed. The department responded that a permit was not required; however, a city permit was needed. As word of his intentions to build a seawall spread, worried neighbors voiced concerns that the proposed structure would aggravate erosion along the beach and limit public access to the shoreline. 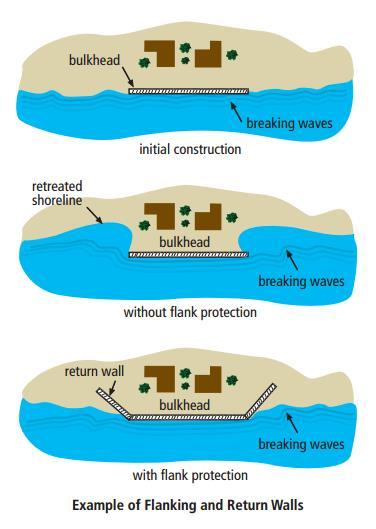 Coastal erosion in the Great Lakes is a product of storm waves, surface water runoff, unstable slopes, and other natural factors. The construction of shoreline protection structures such as bulkheads and seawalls can aggravate coastal erosion. When such structures are constructed parallel to the water's edge, they reflect and amplify the energy from impacting waves. This reflected energy can force sand at the base of the structure to be lifted into the water column and carried away, thus increasing the rate of erosion. These structures can also interrupt the established movement of sediments. Over the long term, construction of shoreline protection structures often result in unnatural erosion or deposition on down-current properties and beaches.

As the potential negative impacts of the proposed seawall came to light, the homeowner soon withdrew his request for a permit, but that did little to quell community members' concerns. They continued to question what consequences might result from development along the shoreline.

Working together to find a solution

Recognizing that storm surge and water lake levels are issues best addressed by working together, the community rallied to find solutions that would protect all their homes and allow them to continue enjoying the lake. Private donors, supported by the St. Joseph City Commission, funded an extensive engineering study to assess the shoreline. The engineering team analyzed nearly 100 years of data on extreme weather events and water levels in Lake Michigan.

Observed water levels in Lake Michigan between 1999 and 2019. The light blue dots depict lake-wide monthly averages, the dark blue line depicts lake-wide annual averages, and the red line depicts the lake-wide period of record average, all from 1918 to the present. Click on the image for a larger view.

The data showed that long periods of high and low water are fairly common in the Great Lakes, as water levels rise and fall cyclically over many years. For example, between 1999 and 2013, Lake Michigan water levels were generally just at or below the long-term average. However, this was not always the case. During public meetings, neighborhood residents recalled having to elevate their docks to accommodate rising water levels in the late 1980s. Checking the data, engineer Michael Morphey noted that during that period, the home that proposed the controversial sea wall project would have been underwater.

The resulting engineering report recommended that the city implement a fixed setback line, beyond which property owners could not build permanent structures along the beach. The recommendation drew mixed responses from the community—some maintained that the fixed nature of the setback line was too stringent and would impinge on their private development rights. After several meetings with the City Commission, the general public, and representatives from engineering firms, a general consensus was reached about the necessity of the proposed setback line. 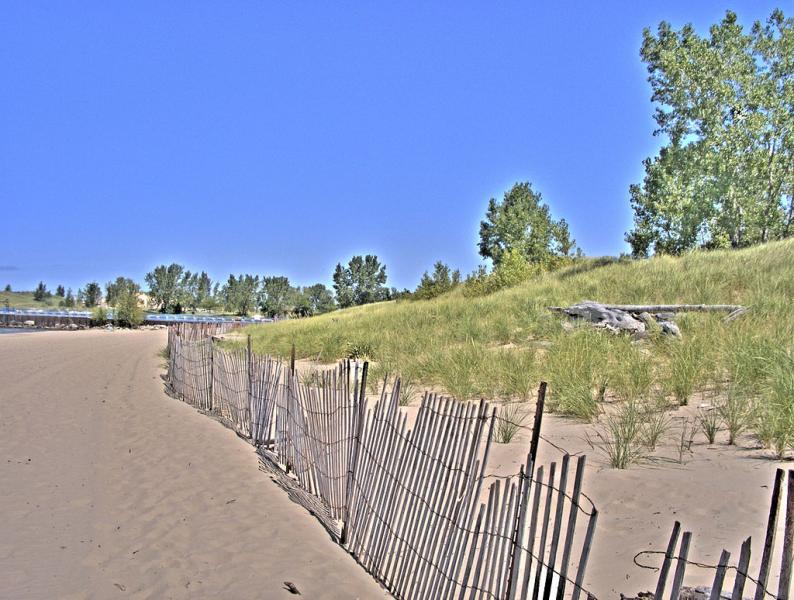 In the fall of 2012, the St. Joseph City Commission passed a “no-build” zoning ordinance. In accordance with the consulting engineers’ recommendations, the ordinance prohibited construction of permanent structures within a fixed elevation above sea level. In St. Joseph, the recommended elevation intersects the shoreline approximately 200 feet from the water's edge. This elevation was determined by adding a two-foot storm surge and a 50-year wave run-up to Lake Michigan's record high water level. The ordinance also recommends that the setback line be reviewed every 10 years, or when Lake Michigan’s water level changes by four feet or more.

This no-build ordinance was the first of its kind in Michigan, and demonstrates how local governments and community members can work together. The collaborative group helped determine policy to mitigate uncertainty and protect the integrity of public access and private property along the shoreline—despite the inevitable fluctuations of Lake Michigan.

Public participation has become an integral part of successful policy development and implementation in the United States. Working through the process of public engagement can help foster a community's acceptance of change and deepen its understanding of proposed policies. Public participation also has the potential to prevent conflict and ease implementation of new policies or regulations.

The use of these methods effectively demonstrated how the new setback could protect public trust lands along the beach. The process fostered an environment in which a mutual understanding of the necessity of the proposed setback line could grow between city staff and the general public.

Tools for visualization and education on coastal processes are available. For example, the U.S. Army Corps of Engineers publication Living on the Coast can be used as a resource for basic descriptions and visuals of coastal processes and their related hazards. Additionally, visualization tools such as CanVis can be used to simulate lake level change and coastal development impacts on photographs. Ordinary citizens and professional practitioners alike can use these tools to help people visualize and understand complex coastal processes.

Part of the resilience-building process is to monitor your results and iterate as needed (see Step 5 of the Steps to Resilience). As it happens, the average water level in Lake Michigan rose more than three feet between 2012 (when the ordinance was passed) and 2016.

After such a dramatic rise, in 2017 the findings in the original study were revisited to review recent changes to the coastline and to re-assess the 2012 conclusions. In the new study, engineers separated the coastline into three distinct areas, each with unique characteristics, to provide distinct findings and recommendations. The engineers hope that the varied conditions of the areas can act as a microcosm for Michigan’s coastlines as a whole.

The entire Area 1 shoreline is sandy beaches with dune grass vegetation and no protection structures. It is typically an accretion zone—an area of the beach where sand is deposited on shore from the movement of the waves, tides, and current—but is subject to erosion at times of higher than average water levels. Based on the new data collected, the original setback line is sufficient for this area. The engineers recommended an outreach program regarding increased risks from beach and dune grading, where the elevation of the foredune declines and allows waves to reach further landward.

The shoreline for Area 2 includes both publicly-owned and private shore protection structures on adjacent private property. When water levels are high, the water line is close to the residential area, threatening property damage and restricting public beach access. The experts recommend that St. Joseph pursue the development of a concept design to both preserve public access along the shoreline and allow property owners to construct necessary shoreline protection structures. Engineers intend that the concept design will become one unified structure. One way to create such a unified structure would be to build a shoreline protection system on the lake side of the residential lots, on public property, to protect both public and private interests. This would require funding and maintenance agreements between the city and adjacent property owners.

The shores within Area 3, in contrast to Areas 1 and 2, are composed of cohesive material, and the majority of the shoreline contains shore protection of varying types and states of repair. Isolated failures have been identified in recent years and are in the process of being repaired. While the report does not recommend additional regulation of shore protection measures, the engineers encourage continued coordination and support for private monitoring and repairs to existing protective measures that are nearing the end of their usefulness.

The study also found that apparently simple grading actions by individual property owners could result in increased risks to their properties. Natural dune grass tends to capture wind-blown sand, leading to the growth of the foredune and the creation of a buffer from the coastal energies of Lake Michigan. Grading and removal of the dune grass can lead to accelerated erosion and allows wave runup to reach further inland than it would otherwise.

The study provides a useful reference for those who make regulatory or development decisions along the city’s waterfront. Other communities can reference the work as one way that local government can manage its coastlines beyond the jurisdictional limits in place. 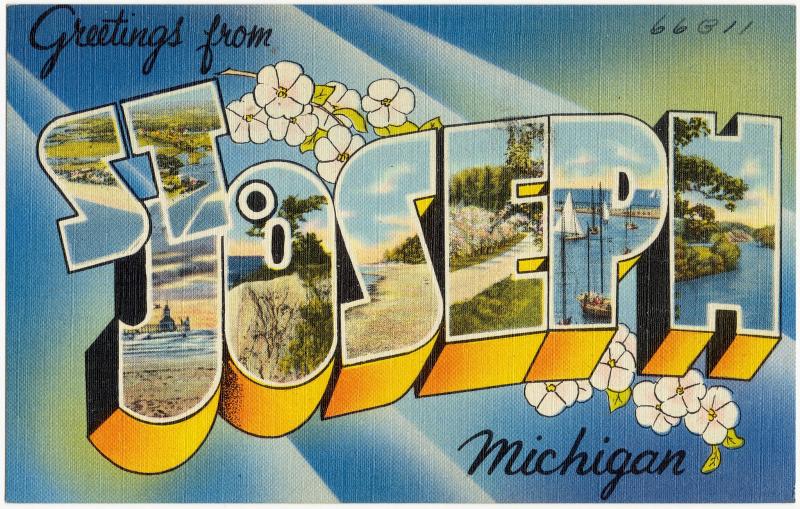 City staff and residents now have a better—and shared—understanding of changes along the shoreline and the economic impact of the setback ordinance. Despite continuing change, the City of St. Joseph has a proven track record of working with the community to build resilience. In the words of Commissioner Jeff Richards, “We’re trying to stay even with Mother Nature… instead of one step behind.”