Higher temperatures, more variable precipitation patterns, and changes in lake levels are likely to increase the vulnerability of human systems in the Great Lakes—including cities, rural and coastal communities, and tribes—to extreme events such as flooding, drought, heat waves, and more intense urban heat island effects. These impacts will compound already existing non-climate stressors such as economic downturns, shrinking cities, and deteriorating infrastructure. Vulnerable communities and tribal nations in the region may be disproportionately affected. 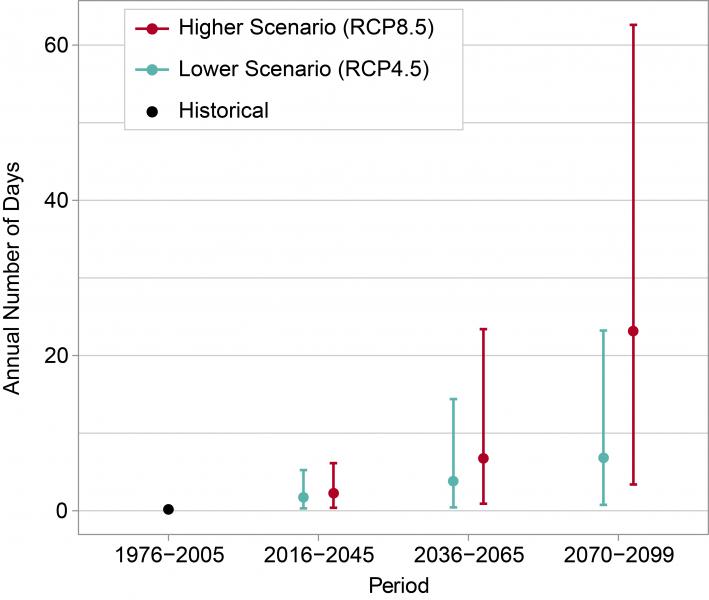 The graph shows the annual number of days above 100°F in Chicago for the historical period of 1976–2005 (black dot) and projected throughout the 21st century under lower (teal) and higher (red) scenarios. Increases at the higher end of these ranges would pose major heat-related health problems for people in Chicago. Click the image for more information.

The frequency of major heat waves has increased over the past several decades, both nationally and in the Great Lakes region. Nationally, observations show that mortality increases by four percent during heat waves compared with non-heat days. One study projected an increase in excess deaths from heat wave-related mortality in Chicago of between 166 (lower emissions scenario) and 2,217 (higher emissions scenario) per year by the end of the century.

Extreme heat is expected to intensify, and urban heat islands may cause hardships to those most vulnerable, such as the elderly and infirm and those who may not have the resources to afford air conditioning.

Heat wave response plans and warning systems have the potential to save lives by reducing heat-related stress in vulnerable populations—particularly pertinent to cities in the Great Lakes region, with its older and aging infrastructure. Expanding the use of green infrastructure and locating it properly may mitigate the negative impact of heat islands in urban settings. Note, though, that heat waves are not just a threat to people living in cities. Residents of northern portions of the region may not have access to air conditioning, and their vulnerability to heat stress may increase as the climate warms.

Poor air quality—particularly in urban areas—is an ongoing concern across the Great Lakes region. A warming climate will amplify impacts on human health from degraded air quality. Air quality that falls below national standards is attributable to both human-induced emissions and a longer pollen season.

Increases in precipitation and flooding events can increase risks for water-transmitted diseases and degraded water quality. Heavy rain events and excess stormwater have increased the number of combined sewer overflow events; these events reduce water quality and can spread diseases to people who come into contact with the lakes and other water sources. Sewer overflows can result in harmful exposure to bacteria (e.g., E. coli), viruses, protozoa (e.g., Giardia, Cryptosporidium), trash, organic compounds, heavy metals, oil, and toxic pollutants. Flooding can also result in water intrusion into buildings, which can result in mold contamination that manifests later, leading to problems with indoor air quality.

A deer tick—Ixodes dammini—from Prudence Island, Narragansett Bay National Estuarine Research Reserve. These small creatures can be quite dangerous to humans, as they are carriers of Lyme disease.

Changes in temperature and precipitation can modify known risks for vector-borne diseases. People in the Great Lakes region have the potential to be exposed to several vector-borne diseases; two of these in particular—Lyme disease and the West Nile virus—carry risks that are largely determined by the amount of favorable habitat for ticks and mosquitoes. Factors that may increase the risks for these two diseases in the Great Lakes include a longer warm season (due to earlier warm temperatures in spring and later onset of cold/frost in the fall), a larger tick population (due to milder winters and potentially larger rodent host populations), and changes in human behavior (such as spending more time outdoors in milder weather). Whether climate change in the Great Lakes will ultimately increase the risks for vector-borne diseases is uncertain, since vector-control efforts and lifestyle factors can significantly alter human-carrier contact.

To learn more about climate-related impacts on public health, visit the Health topic.

To mitigate or better respond to climate-related impacts, communities and businesses should engage in risk-based approaches that focus not only on assessing vulnerabilities, but also include effective planning and implementation of adaptation options. Local, place-based approaches should actively rely on civic participation to evaluate and manage risk and to monitor and evaluate adaptation actions.

Documented implementation of climate change planning and action in Great Lakes cities and rural communities remains low. For instance, a study of 371 cities in the Great Lakes region found that only 36 of them could identify a climate entrepreneur—that is, a public official clearly associated with pushing for climate action.

Attempts to assess vulnerabilities, especially for poor urban communities, face environmental and social justice barriers such as lack of participation and historical disenfranchisement, despite evidence that these communities are going to be disproportionately affected by climate impacts. A lack of political and financial support at the state and federal levels is also a barrier to adaptation action in cities and counties.

Tribes and indigenous communities in the Great Lakes have been among the first to feel the effects of climate change, as it impacts their culture, sovereignty, health, economies, and ways of life. The Great Lakees region contains ceded territory—large swaths of land in Minnesota, Wisconsin, and Michigan in which Ojibwe tribes reserved hunting, fishing, and gathering rights in treaties with the United States government. Climate change presents challenges to the Ojibwe tribes in co-managing these resources with other land managers. As the climate changes, some species important to tribes are declining and may shift entirely outside of treaty boundaries and reserved lands. 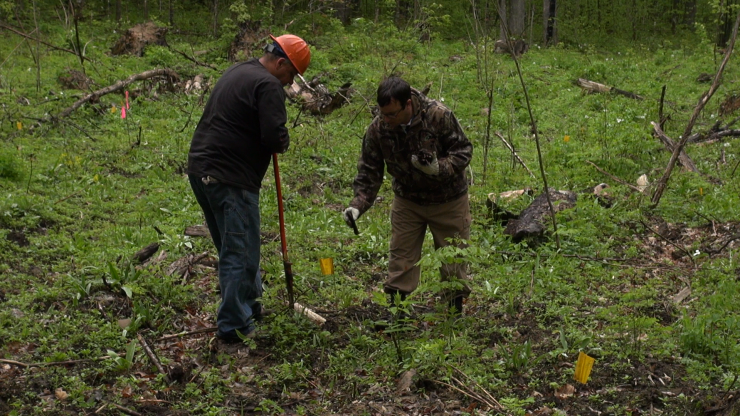 Menominee Tribal Enterprises staff create opportunity from adversity by replanting a forest opening caused by oak wilt disease with a diverse array of tree and understory plant species that are expected to fare better under future climate conditions.

In certain tribal cultures, all beings (species) are important. Climate adaptation efforts that favor certain beings at the detriment of others can be problematic. Adaptation to climate change might also mean giving up on something deeply embedded in tribal culture for which no substitute exists. For example, a family sugarbush (a forest stand used for maple syrup) cannot be replaced culturally, spiritually, or economically if the sugar maple range were to shift outside of treaty or reservation boundaries.

Projected changes in climate, particularly increases in extreme precipitation events, will have pronounced impacts on tribal culture and tribal people in the Great Lakes. Reservations are often located in isolated rural communities, which can present challenges to providing efficient emergency response to tribal citizens in the event of weather- or climate-related events such as flooding.

A number of tribal nations are developing adaptation plans that bring together climate data and projections with tribal members' Traditional Ecological Knowledge. A complex and rich documentation of local ecosystems not found in books can be found within indigenous oral history and can be used to understand and document the changes that are occurring.