As transportation director of the South Alabama Regional Planning Commission, Kevin Harrison’s main concern is keeping the region’s roads, bridges, rails, and ports safe and functional for all the forms of traffic that pass through the region. In 2009, even after the disastrous impacts of Hurricane Katrina just a few years earlier, Harrison wasn’t particularly concerned about the threat of climate change to the region’s transportation system. However, a 2010 study by the U.S. Department of Transportation Federal Highway Administration (FHWA) on the vulnerability of transportation infrastructure to the impacts of climate change in the Gulf Coast region raised his awareness of the risks associated with extreme events. The study also presented an opportunity…

The federal study, officially titled “Impacts of Climate Change and Variability on Transportation Systems and Infrastructure," is more commonly called the Gulf Coast Study. Its first phase took a broad look at potential changes in climate and general impacts on infrastructure across the central Gulf Coast. For Phase 2, the study team wanted to focus in on a single metropolitan community. They selected Mobile, Alabama, because it has a broad range of transportation modes, including highways, airports, transit, marine ports, and oil and gas pipelines. After learning that Mobile was identified as an ideal site for Phase 2 of the study, Harrison’s agency agreed to partner with the federal team as they performed a detailed assessment of vulnerabilities for the area’s transportation infrastructure. 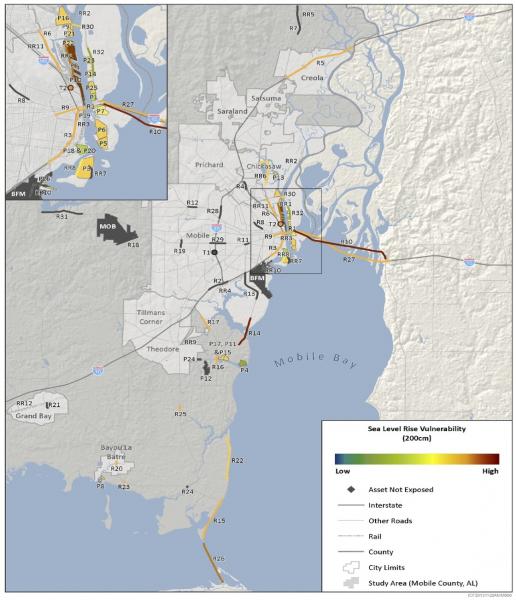 The collaborative study team consulted multiple assessments to document vulnerabilities of Mobile’s transportation infrastructure. Based on projected changes in temperature, precipitation, and sea level rise, as well as storm surges and winds associated with tropical storms, the project team evaluated potential impacts on highways, ports, airports, rail, transit, and pipelines. The federal team, with support from Harrison and other local and regional experts, looked for as many circumstances as they could identify that might interrupt the orderly flow of traffic. They screened critical assets for vulnerability based on exposure, sensitivity, and adaptive capacity. For the 11 most vulnerable assets they identified, they performed engineering assessments to understand the nature of the vulnerability and consider adaptations that might address it.

The team gathered and processed downscaled climate data for dozens of variables for different climate stressors, scenarios, and time frames. Based on criteria related to socioeconomic importance, use and operational characteristics, and health and safety factors associated with each transportation asset, the study used criticality assessments to set priorities for maintaining the transportation system’s functions. The team also documented each step of their study, noting best practices and considering how other regions could implement a similar approach.

The study pointed to storm surge and sea level rise as the greatest potential threats to infrastructure across Mobile’s transportation system. In general, areas near the coast were judged to have the greatest vulnerability. This is due in part to the high concentration of infrastructure elements near Mobile Bay and along the Mobile River. Additionally, low-lying coastal areas that are vulnerable to sea level rise and storm surge are also vulnerable to flooding from extreme precipitation events that occur inland.

One finding of the Phase 2 study: Airport Boulevard, a main east-west artery in Mobile, could be unusable if water overtops the small bridge over Montlimar Creek.

The study also identified a range of possible responses to sea level rise. For instance, adaptation options identified through the engineering assesments included redesigning bridge abutments to withstand storm surges and waves, and increasing the height of bridges: this would allow ships to continue passing under bridges, even as waters rise.

Ultimately, Kevin Harrison and the South Alabama Regional Planning Commission can use information from the study to help them keep roads and bridges passable under future climate conditions. Importantly, other transportation groups can also use the study to assess and address climate-related vulnerabilities of infrastructure in their own regions.