Luck Is Not a Policy We Can Count On: Boston Takes a Proactive Approach to Climate Adaptation

Luck Is Not a Policy We Can Count On: Boston Takes a Proactive Approach to Climate Adaptation

After witnessing what happened in New York City during Hurricane Sandy, Boston city leaders were determined to get ahead of their potential problems. To do so, they convened a diverse coalition of residents and worked to craft a comprehensive plan to adapt to climate change.

When Hurricane Sandy battered New York City and New Jersey in 2012, the devastation was widespread: 73 people died, thousands of homes and businesses were destroyed, and the region experienced $68 billion in damages.

In a letter to residents, Boston Mayor Martin J. Walsh wrote, “Had the storm hit just five hours earlier, Boston could have experienced similar losses. We were not better prepared than New Jersey or New York—we were lucky, and luck is not a policy we can count on.”

So the mayor and a steering committee worked with a broad coalition of citizens to launch an initiative, Climate Ready Boston, designed to update climate projections, assess where the city is vulnerable to a changing climate in terms of its people, buildings, infrastructure, and economy, and lay out a plan for making the city more resilient to climate change.

“What I like about Climate Ready Boston is that it shows a city that is taking action without having suffered the effects of a big storm,” says Ellen Mecray, regional climate services director of NOAA’s Eastern Region. “It’s proactive, and I can appreciate that.”

To better understand Boston's future climate, the initiative's participants consulted with a group of climate scientists in the region. Climate projections generated by the group indicate that Boston’s summers will get hotter—possibly hotter than the summers in present-day Birmingham, Alabama—by the end of the century. And by 2050, sea levels could rise as much as 1.5 feet over what they were in 2000.

The projections also indicate that winters will get warmer, with temperatures dropping below freezing on average only one out of every 10 days, instead of one out of three. Additionally, projections show that extreme precipitation—which rose 70 percent from 1958 to 2010—will continue to occur.

Models created by the Woods Hole Group for the Massachusetts Department of Transportation, with funding from the Federal Highway Administration's Sustainable Transportation & Resilience Team, has served as the foundation for much of the city's climate planning. 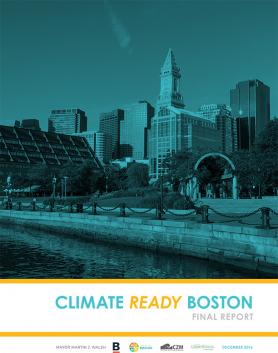 Cover of the Climate Ready Boston Final Report. Click the link to view the report (PDF).

Understanding how projected changes will affect people, buildings, and infrastructure is a main focus of the Climate Ready Boston effort. Its final report outlines how extreme heat can cause health problems, such as heat-related mortality and asthma from poor air quality. Extreme heat can also cause power failures due to the increased demand for electric power for air conditioning. It can also damage roads and kill trees.

The report describes how extreme precipitation and sea level rise can cause stormwater flooding by overwhelming the city’s drainage system. In turn, this type of flooding can wreak havoc on roads, sidewalks, and public transportation lines. The report also details how coastal and riverine flooding—which in the near term would be concentrated in South Boston, East Boston, Charlestown, and Downtown—could cause up to $2.3 billion in property and economic loss.

“Towards the end of the century, it is more than likely we will see at least three feet of sea level rise,” said Carl Spector, Commissioner of the Boston Environment Department, shortly before the Climate Ready Boston report was released in December 2016. “Obviously, some parts of the city are more vulnerable than others...and we want to start the planning now and be flexible as we do that planning, so we can adjust as we see how much and how fast the sea level is rising.”

In addition to climate projections and a vulnerability assessment, Climate Ready Boston also calls for action. The Final Report outlines 11 strategies for coping with the hazards of climate change—everything from increasing climate change awareness among residents to expanding the use of green infrastructure. Those strategies are then broken down further into 39 initiatives. The strategies include:

​Initiatives for this strategy include updating flood maps and launching the Greater Boston Panel on Climate Change, a collection of leading climate scientists from local and regional institutions organized into working groups focused on key climate factors, such as extreme temperatures, sea level rise, coastal storms, and precipitation. The group uses a variety of tools for its climate change projections, including the NOAA Tides & Currents website.

Initiative includes the creation of a program that first ran in the summer of 2017 to train residents from different communities across the city on how to have climate change “conversation events” with their neighbors.

Boston is looking to New Orleans for examples of how to do this. In the aftermath of Hurricane Katrina, New Orleans has become a leader in developing workforce resilience. New Orleans city leaders, for example, have proposed training new sewer and water board employees skills that allow for “living with water rather than fighting it.”

This strategy has initiatives that are neighborhood specific. For instance, in East Boston, an area that is extremely vulnerable to sea level rise and coastal flooding, city planners held an open house in May 2017 to discuss the possible construction of flood barriers. They learned residents preferred flood protection options that also provided a social or environmental benefit to the area, such as a raised path and wetlands or a seating wall and amphitheater, rather than just a flood wall.

This strategy includes an initiative that directs University of Massachusetts researchers to study the idea of building a massive sea wall that would extend across the four miles between Hull and Deer Island and rise to at least 20 feet above harbor waters at low tide. “It’s an idea that’s been floating around for the last several decades and has come back as the climate conversations have picked up,” says Mia Mansfield, Climate Ready Boston program manager for the City of Boston Office of Environment, Energy and Open Space. A more immediate initiative that the city has already started is installing new tide gates on certain parts of the city’s stormwater system, so that sea water doesn’t inundate the system and cause increased flooding during a storm.

The key initiative for this strategy is the creation of the Infrastructure Coordination Committee, a group of private and public infrastructure owners who will set design standards and track investments for climate resilient infrastructure in the areas of water/sewer, telecommunications, transportation, and energy.

One initiative under this strategy is developing microgrids across Boston, so that other electricity sources are available if a storm knocks out the central grid. Microgrids are discrete energy systems capable of operating in parallel with, or independently from, the main power grid. They are less vulnerable to disruption and more efficient because they exploit combined heat and power systems that reuse heat produced by the power generation process.

This involves everything from studying the urban tree canopy to assure there is enough shade to construct wetlands that can absorb some flooding and filter water.

For this strategy, city leaders are working to change how buildings and other infrastructure are built to make sure climate resilience is included. To that end, they are pushing for state officials to adapt state building code amendments to promote climate readiness. “This is something we’re very concerned about and interested in,” says Mansfield. “There could be overlay districts where there were different standards based on the flood risks in those areas or that changes the requirement of how high buildings need to be elevated.”  In 2013, the city also enacted the Climate Change Preparedness and Resiliency Policy, which requires that all projects subject to Boston Zoning Code Article 80B complete a Climate Change Preparedness and Resiliency Checklist. (See the related case study Greening Boston: The Climate Change Preparedness and Resiliency Checklist).

This strategy’s initiatives includes having backup power for buildings that serve vulnerable populations and developing a resilience audit kit, which like an energy audit can identify specific vulnerabilities related to the effects of climate change that property owners can act on. “Not all residents will be affected equally,” Boston Mayor Walsh says. “The elderly, people with health issues and disabilities, people with language barriers, people who lack adequate housing and transportation will be more impacted by a lot of these different risks.”

This strategy includes an initiative that calls for joining the National Flood Insurance Program Community Rating System, which gives municipalities credits for taking specific flood mitigation steps and rewards them by lowering the flood insurance premiums of its property owners.

Overall, Climate Ready Boston is comprehensive. “I know these projects are a lot to take in,” Mayor Walsh said when he released the plan in December 2016, “but in order to become a stronger city, we need to face these challenges head on.”

To do that, city leaders have created layer upon layer of initiatives and involved a plethora of residents ranging from immigrants to representatives of Fortune 500 companies. They’ve also asked for and received the expertise of many institutions, including the University of Massachusetts Boston, Harvard University, and Boston University.

In addition to the wide-ranging work that the plan directs, the city is also committed to reducing greenhouse gas emissions with the goal of being carbon-free by 2050. The report was prepared with three different emission scenarios: business as usual, low emissions equivalent as called for in the Paris Accords, and a medium scenario. "Even though the climate projections didn't change much from one scenario to another over the next 20 years, by the end of the century there are substantial differences from the effects that Boston will see, and the rest of the world will see, depending on how successful we as a global community are in reducing our greenhouse gas emissions," Spector says. “It’s very important, and the importance grows as we get further out in time.”