Rising seas and coastal erosion are eating away at the barrier island on which the Alaska Native Village of Kivalina rests. Residents and others are making concerted efforts to move the community to safety.

Temperatures in the Arctic are rising at more than twice the rate of the global average.1 Results include violent ocean storms, flooding, and erosion beneath the homes of Kivalina—impacts that have been traumatic to the barrier island's Alaskan Iñupiaq community. Sea ice that once protected the island from winter storms no longer forms early enough in the fall to prevent rising waters and storm surge from reaching the island's shores. Patchy sea ice also makes winter travel and hunting difficult and dangerous. 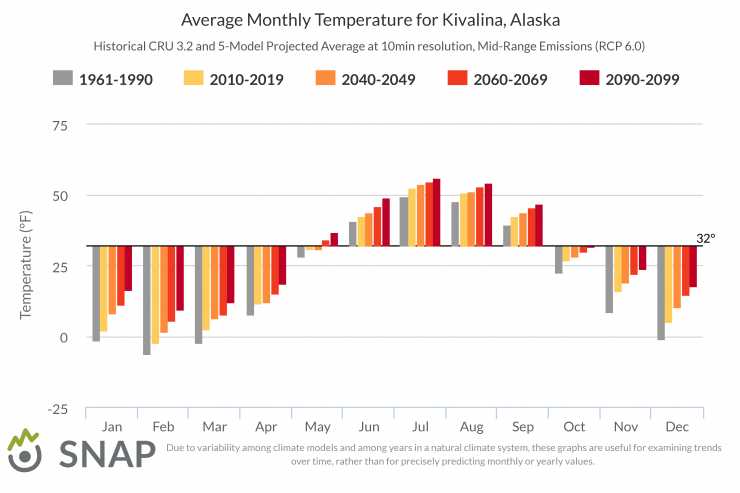 The graph, generated by the SNAP Community Charts tool, depicts historical and projected average temperatures in Kivalina from 1961 to 2099. 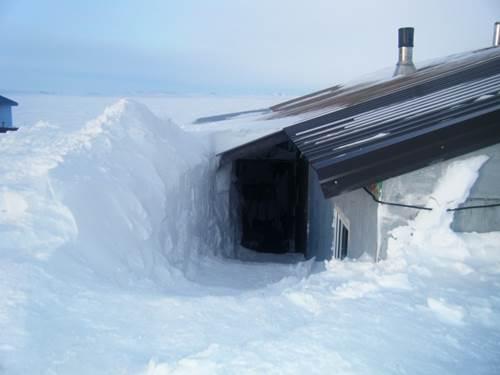 In March 2009, a snowstorm in Kivalina, Alaska, lasted for three days.

Kivalina's environmental problems aren't restricted to the coast: as permafrost thaws, the nearby Wulik River washes away large chunks of streambank, and increased river sediment has caused difficulty in treating the community water supply. Ice cellars in the community that provided a year-round freezer for whale meat and caribou have begun to melt at unusual times of the year (see also the Taking Action story Iñupiaq Work to Preserve Food and Traditions on Alaska's North Slope). Beavers—an invasive species in this region—build dams that make river travel to upstream food sources challenging for residents. Diminishing fish on the Wulik River, changes in caribou migration routes, reduced availability of berries and greens, and the inability to hunt sea mammals due to loss of sea ice have raised concerns about the village's food security: not only do residents fear for their safety due to erosion and ocean storms, growing numbers of families also face hunger. Warmer weather also brings heavy snow storms, and these coincide with increasing numbers of visits to the health clinic to treat high anxiety levels and injuries related to snow clearing. Such heavy snows also increase extended school absences.

The future weighs heavily on the community. “When people start talking about climate change, it really scares me,” laments Russel Adams, Sr., a lifelong resident of Kivalina. “The sea ice used to be twelve feet thick, and there was just one lead. Now it is four feet thick and there are many leads.” (A lead is a large fracture within an expanse of sea ice.) Another resident, Joe Swan, Sr. explains, “The ice used to push migrating whales in close. That was why we could hunt them. But now the ice is too thin; they can go anywhere.”

The meaning of "season" in coastal Iñupiaq communities is different than in the western context. The table below describes traditional subsistence seasons.2

Kivalina has been at its current location since its school was built in the early 1900s. In 2000, the community settled on a nearby—and potentially safer—site for relocation, dubbed Kiniktuuraq. However, investigations by the U.S. Army Corps of Engineers determined that Kiniktuuraq could also fall victim to climate change impacts over time. Thus, the search for a new home for Kivalina residents continues.

In the meantime, the community has undertaken measures to buy them some time. Several beach protection measures have been tested over the past decade, but all have failed. In fact, one particularly costly effort failed in a large storm just days after its completion, worsening rather than improving erosion. After visiting the damage in Kivalina, the late U.S. Senator Ted Stevens helped sponsor legislation to authorize erosion control projects in several affected communities. Through this program, the Army Corps completed a rock revetment in 2010. Installation of this structure reduced the size of Kivalina, but bought the community at least a decade to make a relocation decision.

Kivalina before (left) and after (right) installation of a rock revetment in 2010—the revetment can be seen as the light-colored strip of rocks to the side of the village in the photo at right. A new rock revetment wall has a projected lifespan of 15 to 20 years.

Since Kivalina is limited in size by the encroaching sea and the revetment, housing has become scarce, leading to overcrowding and poor sanitation—an immediate threat to health. Household sewage is hauled in “honeybuckets” to four disposal bunkers located throughout the community. Currently, residents transport their solid waste to a landfill located just over a mile from town. This poses a contamination threat to fisheries during storms, particularly in the Kivalina lagoon east of the city. Additionally, the dump site lacks a perimeter fence and draws wild animals, including bears.

To revamp the village sanitation system, a biochar sanitation system is being designed to turn human and solid waste into sustainable energy. The Climate Foundation—winner of a Bill & Melinda Gates Foundation's "Reinvent the Toilet Challenge" grant—will work with Kivalina leaders and Re-Locate, a group of social artists formed to help with Kivalina's relocation efforts, to apply its success at developing innovative waste management technology around the world to benefit Kivalina and other Arctic communities. The nearby Red Dog Mine, which employs some Kivalina residents, is providing funding for the project's reactor, demonstrating how public-private partnerships can help both parties thrive.

Each year, estimated relocation costs increase, with some estimates for moving the approximately 400 residents ranging from $100 to $400 million—up to a million dollars per person.

In recent years, the Native Village of Kivalina has engaged diverse federal, state, regional, and local partners in quarterly planning meetings and has involved community members in all relocation efforts. Some preliminary studies have been completed—a lagoon causeway study, a reconnaissance study, and an aerial mapping project—but state budget constraints have slowed others.

There is no means to leave the island on foot or by vehicle during a storm, and transport by boat or plane in storm conditions would be dangerous. Thus, plans for an evacuation road have been in development for several years. 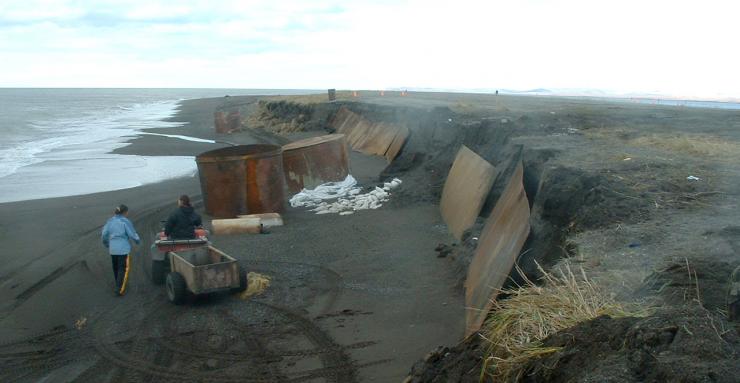 The airstrip in Kivalina cannot be used for evacuation: severe storms make it too dangerous, and erosion continues to threaten its existence. An alternative evacuation and relocation road is being studied.

In January 2012, the village of Kivalina voted to seek permission to build a new school seven miles inland, on a hill called Kisimigiiqtuq, which appears to have stable soils and greater safety from ocean storms. Once further suitability studies on this or another site have been completed and been approved, the Northwest Arctic Borough School District can use funding received from the State of Alaska to build a new school. On July 1, 2015, the Native Village of Kivalina and the City of Kivalina joined councils to discuss changing the evacuation road project to a relocation project to support this development. Through its Department of Community and Regional Affairs, the State of Alaska currently assists the community with a relocation coordinator to further interagency efforts to finalize this or another relocation solution.

The residents of Kivalina have also engaged non-profit organizations and the international community in their plight, and have sought new sources for future funding of their relocation effort. For instance, the group Re-Locate received a $500,000 ArtPlace grant to fund a village-based planning hub for Kivalina, which will be housed in the village's community center. Planned projects included a living archive, large-scale models and drawings of Kivalina’s traditional territory, sanitation technology demonstration projects, and artists in residence.

Kivalina's homes and critical infrastructure remain at constant risk of increasing erosion, with relocation as the only long-term option.

Kivalina IRA President Millie Hawley says that this is a process that “belongs to the people of Kivalina. We’ll visualize where we’re at, where we can be, and how we can move in that direction. There are 229 Tribes in Alaska. Five villages have the same climate change issues, some worse than ours. If you do this project in Kivalina, you do this work for them. They would all benefit from this in their villages.”