City officials in Tybee Island, Georgia, recognized sea level rise as a growing problem for their community. Visualizations from a sea level rise viewer helped them raise awareness of the city's vulnerabilities and led to development of Georgia’s first sea level rise plan.

As sea levels rise, Tybee Island, Georgia—once a favorite haunt of the notorious pirate, Blackbeard—faces a very different kind of threat from the ocean. The city is Georgia’s most densely developed barrier island and a popular tourist destination: its year round population of 3,000 swells to roughly 30,000 during summer weekends. Since 1935, sea levels at nearby Fort Pulaski have risen 10 to 11 inches, and levels are projected to keep rising in the coming years. In order to prepare for and adapt to rising waters, Tybee Island officials knew they needed a plan.

To develop a plan that could prepare their island for the future, city officials reached out to Dr. Jason Evans, an environmental sustainability analyst with the University of Georgia and Georgia Sea Grant. Evans worked with the city to help identify areas were most vulnerable to projected sea level rise. One of the key tools in this process was the Sea Level Rise Viewer. Using the tool, Evans helped identify the areas already affected by flooding and showed how those problems could worsen with continued sea level rise. This encouraged city officials—and the population of Tybee Island—to investigate longer-term solutions for critical infrastructure, housing, and facilities. 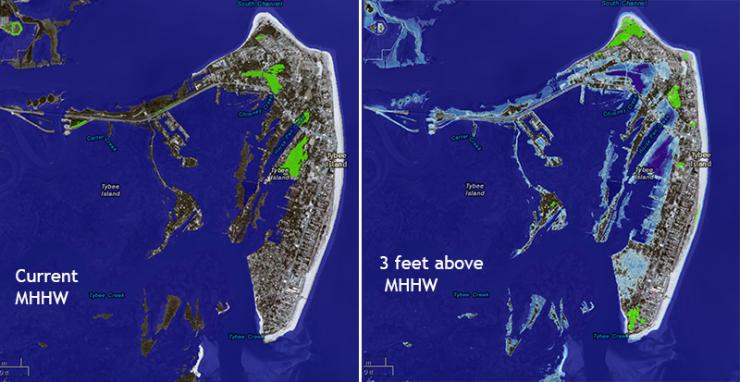 Together, Evans and Tybee Island officials, utilizing funding from the National Sea Grant Community Climate Adaptation Initiative, outlined six plans for adapting to future sea level rise. Plans included major improvements to the U.S. 80 causeway (the only road to and from the island), retrofitting stormwater drainage systems, and stabilizing shorelines in order to block high water from storm surge or extreme high tides. Drawing on visualizations from the Sea Level Rise Viewer, interviews with stakeholders, and public meetings, the city is now prioritizing its action plan and outlining steps to prepare for a future of higher tides and rising seas.

In April 2016, Tybee Island City Council voted unanimously to accept a plan addressing risks that the island faces from sea level rise over the next 50 years. The plan recommends steps to modernize and replace portions of U.S. Highway 80. In 2015, the highway experienced approximately 23 tidal flooding events, significantly more than in any year in the tide gauge’s history. Those events cut the island off from the mainland, proving to not only be a safety and evacuation concern, but an economic one, as well.

“Both in leadership and risk, Tybee Island is at the front lines of sea-level rise adaptation,” said Jason Evans, an assistant professor of environmental science, now at Stetson University. “This plan analyzes how sea-level rise could disrupt economic activities on the island and whether proposed adaptation actions would pay off in the end.”

During the planning process, outreach efforts and public town hall meetings engaged more than 4,000 people, helping to raise awareness of the city's vulnerabilities and set planning priorities. This research has also resulted in tangible savings. The Tybee Island Sea Level Rise Adaptation Plan directly impacted the economy of Tybee Island by helping to improve the City’s rating under FEMA’s Community Rating System. During the planning process, Tybee Island went from a class 7 to 5 in Community Rating System, enabling savings of $3 million on flood insurance for property owners on the island.

Funded by the NOAA’s National Sea Grant College Program, the City of Tybee Island Sea Level Rise Adaptation Plan has emerged as a model for other coastal communities across the country.

The image and text below describe an interactive, map-based exploration of the area described in the case study. Use the instructions below the image to guide your exploration in the Climate Explorer tool (opens in a new window).

This map shows Tybee Island, Georgia, a coastal barrier island with a vibrant marsh on the west side of the island. Click the image to launch this view of Climate Explorer in a new window.

After one foot of sea level rise, the map layer shows that almost all of the marsh will be inundated during high tides. The Land Cover (2011) shows the types of land use that are at risk of inundation (click the i symbol to display and interpret the Land Cover legend).

Note that with one foot of sea level rise, a section of the causeway leading to the island is completely inundated.