Changing ocean chemistry could have a disastrous impact on shellfish and fisheries in Puget Sound. The Suquamish Tribe is working with partners to inform the public about this problem while they elicit support for research and monitoring the issue.

For millennia, the Suquamish Tribe has depended on fish, shellfish, game, and plants supplied by a variety of ecosystems in Puget Sound. The fruits of these Pacific Northwest ecosystems provide for the Tribe's economic, nutritional, and cultural needs. Knowledge of these ecosystems enabled the Tribe to overcome various challenges through two centuries of conflict and cooperation with European traders, American settlers, and modern developers.

Today, seafood, game, and traditional plants remain essential to the Suquamish culture and diet. Around 20 percent of the Tribe's members help support their families by earning income from the harvest of fish and shellfish, and proceeds from geoduck clam harvests support elders' programs. However, decades of development have significantly degraded these species' habitats, which reduces their ability to withstand predicted impacts of climate change. For example, salmon must swim through long stretches of unshaded streams (the result of development), which increases their vulnerability to higher stream temperatures and lower stream volumes.

Now, a new stressor threatens the ecosystems on which the Tribe depends: ocean acidification. Many people understand that burning coal, oil, and gas to power modern development produces carbon dioxide, and as the abundance of this heat-trapping gas increases in the atmosphere, Earth's climate warms. Fewer people understand that as increasing amounts of carbon dioxide are absorbed by the ocean, the pH level of its waters decreases, making the ocean more acidic. This phenomenon, called ocean acidification, gives the water a corrosive quality that interferes with the ability of key species of shellfish to grow their shells.

The combined, ongoing impacts of development, climate change,  and ocean acidification threaten to radically change the availability of natural resources on which the Suquamish have always depended. In the face of these threats, the Suquamish are employing innovative ideas to improve their resilience.

Changes in the sea

Research shows that the ocean has absorbed almost a third of the carbon dioxide released by human activity since 1750, and this absorption has already lowered the pH level of the ocean by 30 percent. The ocean has also absorbed 93 percent of the heat energy trapped by increased carbon dioxide since 1970. By absorbing heat and carbon dioxide, the ocean has buffered the impact of climate change on land and air, but at the cost of altering fundamental aspects of the ocean. Ocean impacts from the one-two punch of increased carbon dioxide in the atmosphere and in the ocean include reduced pH (trending from a base toward an acid), higher temperatures, rising sea level, decreased oxygen content, changes to fish behavior, shifts in species ranges, and a potential increase in harmful toxic algal blooms. As increased acidity makes it harder for shellfish that form the base of the marine food web to form their shells, ocean acidification may reduce the capacity of the ocean to support the Suquamish and hundreds of millions of other people who depend on ocean resources. 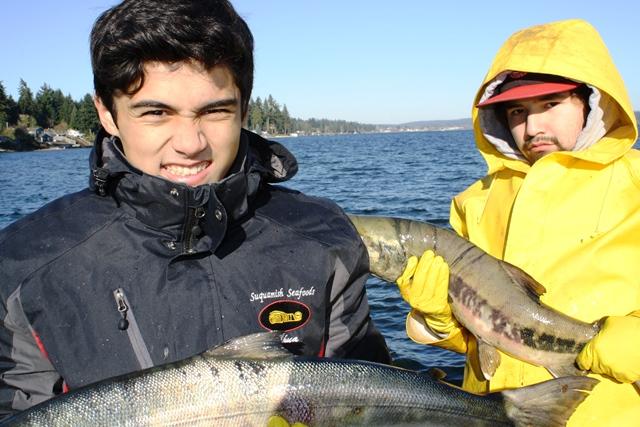 Chief Kitsap Academy students Alijah Sipai (left) and Jerald Delafuent (in yellow) fishing for chum salmon in the fall. Back on shore, they learned how to catch, clean, smoke, and preserve salmon, continuing a centuries-old way of life. They then shared their delicious catch with their families, friends, and a few very lucky fisheries staff members.

In 2010, biologists working in the Tribe's Fisheries Department began discussing the threats of ocean acidification and climate change with the Suquamish Shellfish Committee. In exploring the issue, the Shellfish Committee wanted to know which species would be impacted and when, to help them make sound decisions in adapting to the change. A recent research review paper1 indicates that at the current rate of carbon emissions, many of the organisms that were evaluated will have a very high risk of being impacted by ocean acidification by 2050. In the Pacific Northwest, scientists have gathered evidence that several species of zooplankton at the base of the marine food web are already being impacted, including pteropods (tiny swimming snails that pink salmon consume) and oyster larvae. However, the current technology is inadequate to detect widespread changes in zooplankton populations.

In consultation with the Shellfish Committee, the Tribal Council adopted two strategies for immediate action: (1) use the K–12 educational system to help change human behaviors that harm ecosystems; and (2) develop computerized zooplankton imaging and identification tools researchers can use to detect and monitor changes at the base of the marine food web.

Changing the habits of environmental neglect

Over the last two centuries, most of the native forests around Puget Sound have been lost or fragmented, the quantity and quality of freshwater streams in the region has been degraded, and nearshore habitats have been altered. Species have been lost or reduced due to over-harvest, and pollutants on land continue to enter the nearshore environment with stormwater. The Suquamish Environmental Program has been working for decades with other tribes and agencies to address these historic and current threats. However, reliance on a few dedicated professionals to counter ever-increasing human development pressures may not be adequate.

Conditions in Puget Sound are the result of land use policies designed to promote economic development with minimal consideration of the costs borne by the local ecosystems. While many of these damaging policies have changed, some of the human behaviors they encouraged or allowed have persisted. The Suquamish Tribe has little control over the global issues of climate change and ocean acidification, but they recognize the possibility of changing human behaviors. They acknowledge that people's choices about what and how much people consume, how and where they build, how they get around, and how they dispose of their waste can all be modified to minimize impacts to ecosystems.

The educational potential of the K–12 public school system

The banner of the Ocean Acidification Curriculum Connection website. Click on the link to read more about the tool.

More than one million students attend kindergarten through 12th grade in Washington public schools—they are a highly impressionable, captive audience every school day for 12 years. As a key objective of public education is to prepare youth for challenges they will face in their future, and technology and environmental conditions are both changing at increasingly faster rates, the Suquamish feel that understanding the science that explains those changes and learning the skills that enable them to use new technology should be part of every student’s education.

This high rate of change is widening the gap between what is taught and what needs to be learned. The Tribe pondered on the question of how they could help close this gap, and at the same time influence behaviors of the next generations. The Tribe chose to collect and organize educational materials on ocean acidification to make it easier for teachers to incorporate this emerging science into their classrooms.

The collection of materials is available online through the Ocean Acidification Curriculum Connection (see link in the sidebar, under Tools). Educators can use the site to search for free lesson plans and supplemental materials on ocean acidification appropriate to their grade and subject. The recent release of the Next Generation Science Standards has provided a short window of opportunity to get these materials into classrooms. The new standards are unique in that they encourage the inclusion of three foundational parts in each lesson: (1) the practices scientists and engineers use to answer questions and solve problems; (2) disciplinary core ideas; and (3) key cross-cutting concepts. The topic of ocean acidification fits this model well—it is highly relevant to students’ futures and provides a new and interesting context within which to explain other ideas in the standards.

Enhancing our ability to detect change in zooplankton populations

University of Washington bioengineering student Spencer Boyar developed this device to capture images of zooplankton from different angles. It uses one camera and two mirrors to capture images from five angles. A motorized syringe draws the sample into the imaging chamber, the image is recorded, and the sample is automatically pushed out. Parts are made from ABS (acrylonitrile butadiene styrene) plastic; they snap together and can be inexpensively produced on a computer numerical control (CNC) mill.

The Tribe is also pursuing another strategy to study the impacts of ocean acidification: they are building tools that facilitate the visual study of zooplankton. A range of tiny animals and larval life stages of other species make up the base of the marine food web. As many of them have calcium carbonate shells and are undergoing rapid development, they are thought to be highly vulnerable to ocean acidification. Despite their critical importance and vulnerability, little is known about these populations because they are impracticable to assess on a large scale using the current technology of plankton nets and microscopes. 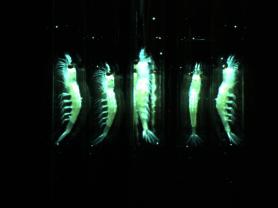 Images of a krill taken with the zooplankton imaging device. Developers are currently working on a new version of the imager, which will have increased image resolution.

To address this issue, the Tribe's shellfish biologists are working with University of Washington students and faculty to develop innovative tools for assessing the health of zooplankton populations. Working with technology such as underwater cameras and inexpensive microcomputers with image recognition software, the Tribe hopes to facilitate development of cameras that can automatically capture images of zooplankton and identify them, leading ultimately to a program to detect and monitor impacts of ocean acidification on these species.