At the mouth of Chesapeake Bay, the city of Norfolk, Virginia, lies within ten feet of sea level. It's taking steps to envision and implement a resilient future.

As a low-lying coastal city, Norfolk, Virginia, has more than 144 miles of shoreline along lakes, rivers, and the Chesapeake Bay. These waterways provide the city with numerous economic benefits and amenities, including a massive naval base, strong maritime industries, recreation, active waterfronts and shipyards, and deep-water ports. These amenities have contributed to the successful development of the city…yet the waterways also pose challenges. 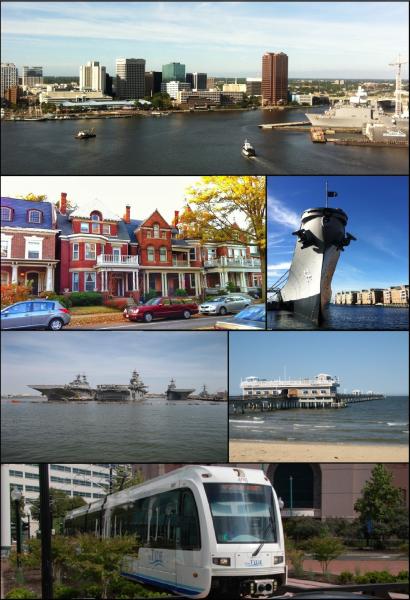 Norfolk’s low elevation and proximity to waterways also make it extremely vulnerable to flooding. Specifically, the city is at risk for precipitation flooding (rain intensity exceeds storm drain capacity), storm flooding (surge from storms like hurricanes), and tidal flooding (related to elevation and proximity to coastline). The city is also at risk for impacts from sea level rise and subsidence, which only magnifies the effects of flooding events.

Community members report that coastal flooding has become more frequent and more severe than in the past, and is now occurring in areas that traditionally did not flood. One of Norfolk’s historic neighborhoods, the Hague, has seen an increase in the number of hours per year it floods from about 50 hours in 1971 to over 300 hours in 2009.1

With more than 243,000 residents, Norfolk is taking proactive steps to prepare for these flooding hazards and build the city’s overall resilience to extreme events. When the city was named as one of the Rockefeller Foundation's 100 Resilient Cities, Norfolk chose the challenge of remaining "resilient amidst rising sea levels."

As one step toward resilience, Norfolk is investing in a variety of flood mitigation efforts. In particular, the city’s 2012–2016 Capital Improvement Plan budgeted $4.5 million to address street flooding throughout the city, and $6.5 million for a beach stabilization and erosion control initiative. The city’s comprehensive plan, plaNorfolk2030, encourages planners to consider sea level rise and its effects as an integral part of all development activities. In 2014, Norfolk released a Coastal Resilience Strategy for coastal flood management, integrating the processes of planning, preparing, mitigating, and communicating to reduce the impacts of flooding. Within this document, the city recommends a critical mitigation measure—elevating new construction.

The Coastal Resilience Strategy is one of a series of efforts in Norfolk to revise the city’s flood and coastal zone ordinances. Since 2009, staff at Norfolk’s Department of City Planning has seen an increase in insurance claims to FEMA’s National Flood Insurance Program (NFIP), indicating that properties were experiencing more flood events. Staff were also concerned about the city's standing in the Community Rating System (CRS) within the NFIP due to the increase in insurance claims. To address these issues, they began exploring options to change zoning ordinances within FEMA-defined flood and coastal zones.

Staff at Norfolk’s Department of City Planning proposed a series of changes to existing ordinances to mitigate flooding and better protect residents; these changes would also reduce flood insurance premiums by improving the city’s status in the CRS. Specifically, they used sea level rise projections from the Virginia Institute of Marine Science when deciding how to change the flood and coastal zone ordinances.

The key changes centered on elevating structures. In particular, all new construction would be required to have a three-foot "freeboard," which means that the lowest level of a structure must be at least three feet above FEMA’s mapped base flood elevation. This two-foot increase in elevation from the existing one-foot freeboard requirement accounts for sea level rise.

Norfolk also addressed existing structures by considering cumulative damages. Specifically, the new provision required existing structures to comply with the three-foot freeboard requirement if two flood damage events occurred—each totaling 25 percent or more of the market value of the structure—or if the building was structurally damaged or altered.

These proposed zoning ordinance revisions passed on June 21, 2013, and went into effect on January 1, 2014.

Norfolk’s revised ordinances do have some limitations, and city staff is taking them into consideration as they move forward. One concern is that Norfolk is already fairly built-up, so only a limited amount of new construction projects need to comply. As a result, adaptation will be piecemeal as existing structures are elevated.

Another point of concern is that property owners could wait years for FEMA’s funds to elevate their structures after damage, slowing the city’s progress toward adaptation.

And even though the revised ordinances help Norfolk address the effects of sea level rise and tidal flooding on new buildings, it does not address impacts to new public infrastructure, such as sewer lines and roads, upon which residents rely.

Despite these limitations, Norfolk’s revised ordinances are a proactive step to addressing a serious flooding problem that will help the city become more resilient. The three-foot freeboard requirement will take Norfolk an estimated 60–65 years into the future, giving the city time to find larger, more comprehensive solutions to recurrent flooding.

Norfolk’s efforts have also set a positive example for neighboring towns in Virginia. Hampton, Poquoson, and Portsmouth are considering or have passed ordinances that raise their freeboard standards to three feet as well. Looking to the future, the city plans to consider viable infrastructure solutions alongside neighborhood economic development and design more comprehensive adaptation plans to future inland and tidal flooding.