An extreme precipitation event in 2008 cost one town more than a million dollars in infrastructure repairs. Now, other municipalities can simulate how their homes, businesses, and facilities might fare if they experienced a similar event.

Prolonged heavy rains over south central Wisconsin in June 2008 did not particularly concern Reedsburg Public Works Director Steve Zibell. After all, just two years earlier the city had completed an $11 million upgrade to their wastewater treatment plant, including construction of a new berm along the Baraboo River to protect the plant from a 100-year flood. However, after two weeks of wet weather, a whopping 14 inches of rain had fallen across the area, and river levels rose two feet higher than the new berm. The new treatment plant was inundated and inoperable for weeks, discharging raw sewage into the Baraboo River. 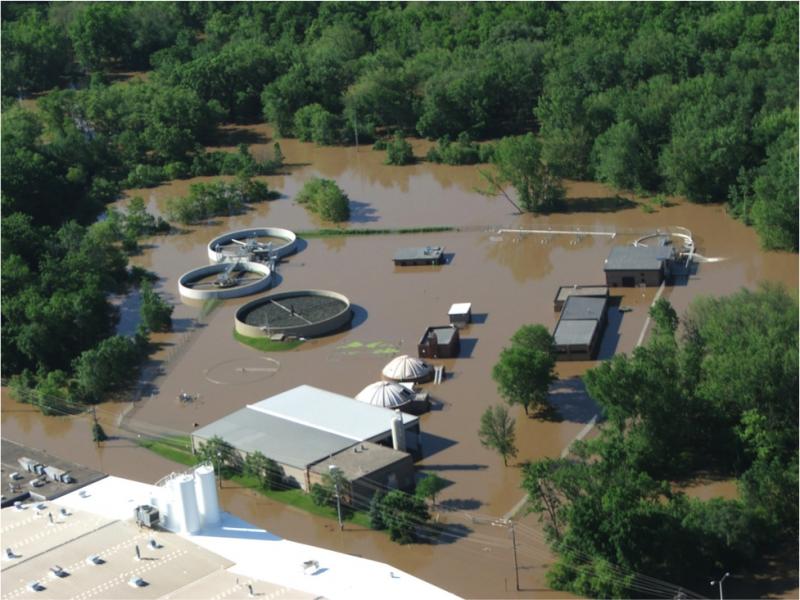 After spending $850,000 in repairs, plus $400,000 to raise the berm an additional three feet, Zibell feels that Reedsburg is ready for the next big storm event.  But across the country, communities learning of what happened at Reedsburg wondered, “How would a storm like that impact our community?”

The historical record of rainfall and projections of future rainfall from climate models both paint a picture of heavier and more frequent extreme storms for Wisconsin in the future. However, the potential for flooding—identified through mapping of areas anticipated to experience flooding once or more per century—is calculated from historical records that don’t reflect today’s changing climate conditions. Combined with the typical municipal approach of adapting to rainfall impacts after a large storm has occurred, many communities are vulnerable to extreme rainfall events.

Just south of the Baraboo River watershed, Madison—Wisconsin’s state capitol—is in the Yahara River watershed. The most obvious feature of the Yahara watershed is a slow-draining chain of lakes that runs through a mixed urban and agricultural landscape. A portion of Madison is on low-lying land between two of the lakes; in fact, no place in the city is far from a lake. Runoff from expanding urban development is already causing erosion of wetlands and shorelines, so residents have some awareness of flooding issues. Several communities in the region recognized they were ill-prepared for the flooding that would occur if they experienced extreme rainfall.

NOAA’s Sectoral Applications Research Program provided funding to scientists at the University of Wisconsin-Madison to build a tool that would allow communities to assess their vulnerability to extreme rainfall without needing to experience it. Using NOAA’s NEXRAD rainfall radar record of the 2008 Baraboo River storm, they built a computer simulation to “transpose” the 2008 rainfall over the Yahara River watershed, and model the runoff, streamflows, and lake levels as if the storm had occurred further south than its actual location. Using this approach, the model helped planners discover unforeseen vulnerabilities and adaptation opportunities. The simulated storm helped municipalities and businesses recognize steps they could take to minimize the impacts of future extreme storms. 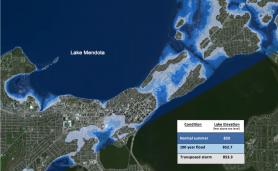 What would happen if the 2008 storm had occurred over the Yahara watershed?

How are local governments in the Yahara River watershed preparing for extreme rainfall?

Building on this storm transposition simulation, communities can now use NOAA NEXRAD rainfall data from any recent rainfall event to demonstrate what would happen if the event occurred in their location. Understanding how a storm that happened nearby would impact their own location identifies vulnerabilities and helps communities see options for how they can build resilience.

Using the storm transposition tools requires specific technical skills. Ultimately, the developers envision the tool as a NOAA/USGS product, available online with either a catalog of design storms or the ability to choose specific storm events from the NEXRAD archives. Currently, however, the tools are used primarily by engineering consultants or regional planning commission staff.

Editor's note: In September 2017, we learned that the Principal Investigators of this project have retired. Documentation of their efforts is available on this page. We would love to hear from anyone who takes steps to make storm transposition possible for other communities.