Planning for the Win! Using a Role Play Simulation to Plan for Climate Adaptation

Planning for the Win! Using a Role Play Simulation to Plan for Climate Adaptation

Winyah Bay Watershed and Georgetown County in South Carolina. Click on the map for source notes.

Georgetown, South Carolina, is home to Winyah Bay, the third largest watershed on the east coast. Water has defined this community, particularly the modification of the landscape for rice cultivation. Enslaved Africans built canals to strategically flood land, which remains prone to flooding to this day. In the post-Civil War era, industries—including timber, paper, and steel—grew to prominence. Today, water remains vital to the current county economy. Although manufacturing remains important, the current economic landsape of Georgetown is highly dependent on ecosystem services provided by natural resources. Coastal tourism is a major economic driver, alongside recreational and commercial fishing and the timber industry.

In recent years, Georgetown County has experienced multiple, consecutive extreme events, including thousand-year rainfalls and hurricanes, and increasing frequency of high-tide flooding. In each case, this coastal county has endured threats to life; impacts to ecosystems, infrastructure, and housing damages; and lost business revenue and school days.

The primary tool was a role play simulation case study for coastal southeast communities. Role play simulation exercises are a means for decision makers to consider high-stakes situations with difficult choices. Simulating realistic, but hypothetical, scenarios in a low-risk setting allows participants to explore options and consider multiple perspectives. This approach was modeled after a project in New England that employed stakeholder engagement, consensus building, and climate projections in community planning.

Stepping into someone else's shoes

The Georgetown role play simulation case study models a fictional, but realistic, climate planning process via a stakeholder planning meeting for climate adaptation. The simulation was developed based on stakeholder interviews that assessed the social, economic, and demographic perspectives representative of a community decision-making body in a fictional county in the southeastern United States, where participants are asked to work collaboratively to prioritize actions that could help the community manage flooding risks. To implement the simulation, workshops were held in diverse communities throughout Georgetown County. 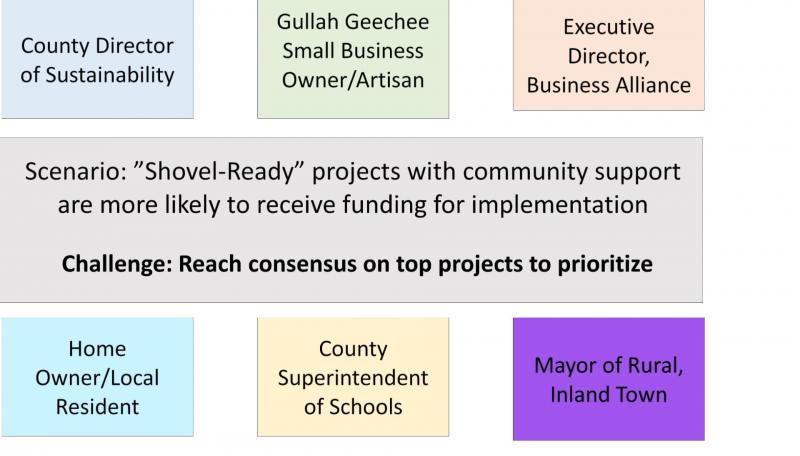 Participants were given a stakeholder role to portray—one that was specifically chosen to be different from their real-life identity. While participants could have easily played themselves, playing roles different from their own identities increased social learning, understanding, and empathy, which was a valuable outcome for the whole community.

With the task to prioritize adaptation options, participants were required to seek out a consensus from the group despite the differing interests represented. Community participants considered data when making decisions about adaptation actions; they received a data table with downscaled climate projections. Carolinas Integrated Sciences and Assessments, a NOAA RISA team, produced predictions of temperature, precipitation, storm frequency, etc., at scales relevant to local decision makers.

Over 200 participants from diverse communities within the county engaged in the simulation pilot, workshops, and a train-the-trainer session.

Left: In the Town of Andrews, community members work toward consensus around climate adaptation options. Right: In the Murrells Inlet community, workshop participants step into someone else’s shoes to discuss climate impacts. Click on the image for larger view and source notes.

The Georgetown Climate Adaptation Project established a high level of concern for climate impacts and support for stakeholder engagement in planning processes, while simultaneously building the knowledge and skill base among community members to productively participate. A lesson learned from this project is the importance of best practices for engaging underserved communities, such as partnering with trusted ambassadors and finding accessible times and locations.

Next steps will require the incorporation of adaptation actions in formal planning. Role play simulations can lay the groundwork for future action, but are only a first step in building community resilience. Findings from workshop discussions and participant surveys were presented to Georgetown County Council, helping leaders better understand community perspectives on flooding risks.

The role play simulation case study is available for anyone to use in their community or organization; it was designed to represent climate issues and stakeholder dynamics throughout the Gullah Geechee Cultural Heritage Corridor. Complete project materials, including the role play simulation case study, instructions for workshop facilitation, and survey results, are available from the project website.