Living on the Yukon Delta

The Yukon River drains a vast and diverse area of western Canada and Alaska. Where it approaches Alaska’s southwest coast on the Bering Sea, the great river spreads out and meanders across the Yukon Delta, a broad, flat region of wetlands and tundra underlain by permafrost. For thousands of years, Native Alaskans of Yup’ik and Cup’ik cultures have flourished in this unique region, sustained by hunting, fishing, and gathering the region’s diverse plant life. 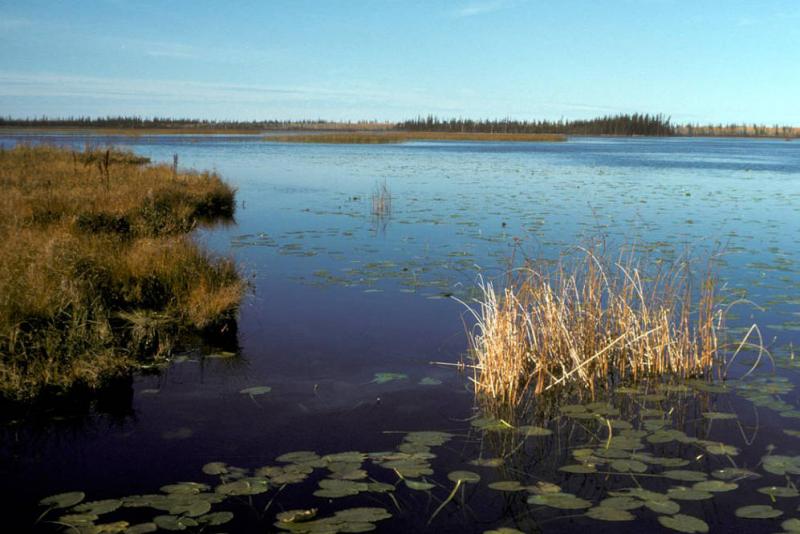 Rivers, ponds, lakes, and marshes—with a little land in between them—are common across the Yukon Delta.

Subsistence-based communities in this region are remote and isolated—most of them have airports, but they don’t have roads or many cars. In winter, many delta residents rely on snowmobiles to travel over the landscape and cross ice-covered rivers and ponds to reach hunting and gathering locations that provide about half of their food supply.

The Arctic and Subarctic regions are warming faster than anywhere else on Earth. In recent years, residents of the Yukon Delta have noticed unusual conditions. They’ve seen warmer winters with less snow and more unpredictable weather. Ice on the rivers and sea is thinner than in the past, and break-up of ice happens earlier in the year. With reduced snow cover and ice that can’t support the weight of people traveling over it, hunters are restricted to smaller areas, and they can have difficulty harvesting the game upon which they depend.

In order to make choices that will help them adapt to new conditions, residents need an understanding of how things are changing and how those changes might affect them. The lack of historical baseline data in this remote location makes it difficult to predict how things will change in the future. Especially among young residents, people wonder, “Where will we get the resources we need in the future? Will we need to build roads or change some of our traditions to continue thriving?” 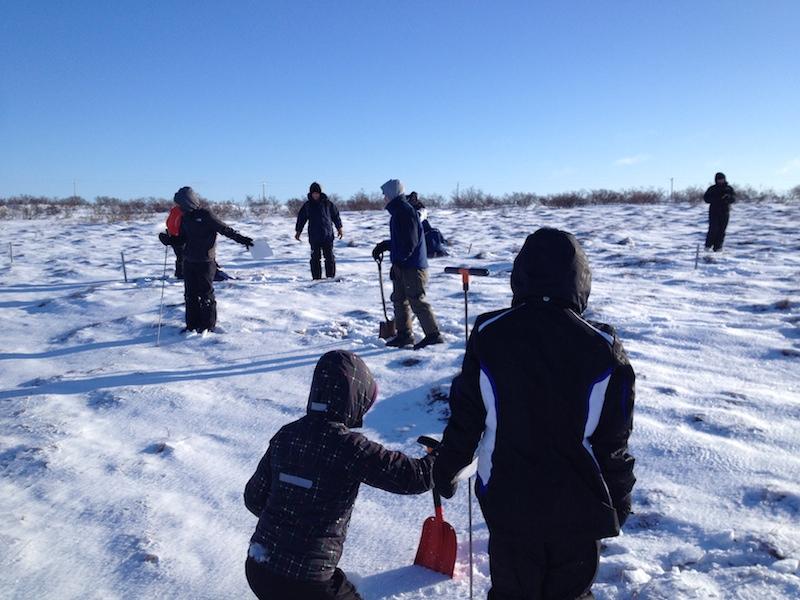 Researchers and community members use shovels and coring intruments to gather environmental observations.

To help residents document past and current conditions across the delta—and use that information to anticipate and adapt to future changes—a group of scientists from government agencies and universities collaborated with community members from four indigenous communities. In the winter and spring of 2014, researchers and community members gathered observations in a project called Strategic Needs of Water on the Yukon (SNOWY).

With funding from the National Science Foundation, researchers and residents worked together to document observations from all generations in the communities. They used both quantitative and qualitative methods to tell the story of environmental change in the region. For instance, interviews with residents resulted in information about seasonal shifts in weather patterns and observations about water. Residents described their observations of water in all its forms—snow, ice, rain, and other forms of precipitation—as well as water in ponds, lakes, rivers, and the sea. Community members also participated in mapping workshops in which they hand-drew maps of subsistence resources during the different seasons.

In each village targeted for comprehensive fieldwork, a large school and community outreach component focused on educating both students and community members about environmental-science activities conducted in their village. Instruction included protocols for under-ice river water sample collection and snowpack measurements.

The collaboration yielded data that will be developed into a number of products for both the Yukon Delta communities and the scientific community. For example, seasonal calendars of subsistence resources and community activities can help village residents anticipate upcoming opportunities for gathering foods and recognize when subsistence foods must be supplemented by other sources.

All of the information collected during this project is being digitized and housed on a community atlas developed by the Exchange for Local Observations and Knowledge of the Arctic (ELOKA).  The community atlas gives residents a way to contribute observations as well as access data that can help them identify climate threats and develop adaptation strategies. With the permission of the communities involved, staff from the SNOWY project expect the atlas will be accessible to the public, highlighting the knowledge that these communities hold about their environment and the observations of change they are experiencing.