Faced with challenges that force some villages to relocate, three governing entities worked together to come up with a single plan to keep residents and buildings safe while a longer-term solution is developed. 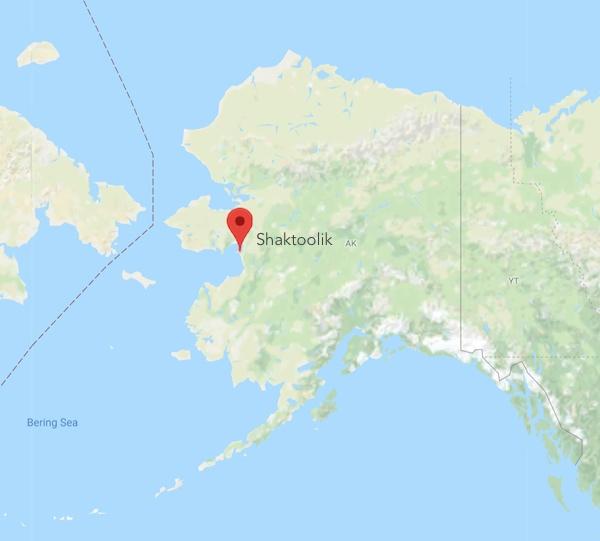 Shaktoolik is located on the coast of Alaska, in Norton Sound, an inlet of the Bering Sea just south of the Seward Peninsula.

Located on Alaska's Norton Sound near two freshwater rivers (the Shaktoolik and the Tagoomenik), Shaktoolik is within walking distance to innumerable freshwater ponds. The location's easy access to abundant natural resources makes it obvious why many generations of Alaska Natives have chosen to live in this region.

The Unalit Yup'ik people were the main inhabitants of the Shaktoolik area for more than 6,000 years. In the 1800's, Malemiut Inupiat people also took advantage of economic and resource opportunities in the region. Over time, disease impacted the Unalit Yup'ik people, and changes in the economy helped the Malemiut people thrive. Today, the community represents a mix of peoples who have adapted to local conditions to flourish in this environment.

The everyday lives and traditions of people in the region are now being threatened by the impacts of climate change. For example, higher average temperatures are associated with later freeze-up of sea and shore ice, and the ice that does form is generally thinner than in decades past. During the region's stormy autumn months, if solid ice is not in place, waves build up higher and strike the land with more force, eroding beaches or overtopping beach dunes, occasionally leading to flooding. Rising global sea level is expected to further exacerbate these impacts. 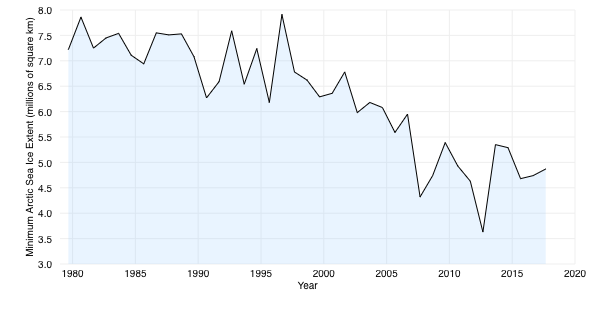 The graph shows the average area covered by sea ice during September each year. Minimum sea ice extent has decreased 12 percent per decade since 1979. For more information, visit Arctic Oceans, Sea Ice, and Coasts and Climate.gov.

The community of Shaktoolik has already relocated several times—this dynamic region presents many challenges for a permanent village site. The most recent relocation was in the 1970s, when the community moved to its current location from “Old Site,” a spot about two miles south of the current village.

Historically, adapting to environmental impacts involved various seasonal practices that gave the community more flexibility in housing and location. Today, new adaptations are required due to the legacy and current realities of a U.S. education system, Western infrastructure, and a mixed subsistence-cash economy.

In the early 2000s, fall storm surges repeatedly threatened the safety and security of the community. Recognizing the danger of flooding, leaders in Shaktoolik took it upon themselves to do something about it.

Local leaders approached state and federal agencies, regional entities, and political representatives to encourage them to provide support and resources to help the community address these climate change impacts. Through a planning process that spanned more than 12 years, the local governing entities in Shaktoolik (the Tribal Council, the City Council, and the Village Corporation) worked with a long list of state agencies, federal agencies, non-profits, corporations, researchers, and consultants. 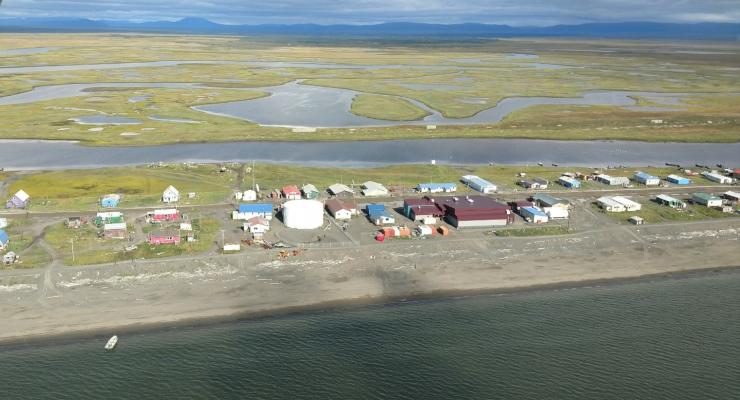 Shaktoolik from the air.

As a rural indigenous community in Alaska, Shaktoolik faces a range of challenges related to working without outside entities. In addition to the high cost of shipping materials and goods to the region, the remote location also introduces logistical challenges. For example, communication can be a challenge due to inconsistent telephone and Internet capabilities, particularly during inclement weather. Subsistence priorities can also present a challenge: seasonal timelines for hunting, fishing, gathering, and other subsistence activities do not always align well with timelines conducive to planning and working with government agencies.

Despite less-than-ideal circumstances, the leaders of Shaktoolik have been persistent and patient in working to address the climate change impacts they face.

Early in the process, the Tribal Council, the City Council, and the Village Corporation formed a tri-organizational council to coordinate actions, combine resources, and speak with a unified voice in advocating for community needs for adaptation. In the process of creating the tri-org, members emphasized communication and transparency to encourage the involvement of any interested members of the community.

Developing an inclusive and open process enabled Shaktoolik to work through differences of opinion and continue moving toward solutions. As a result, the community has achieved several positive outcomes, including development of a solid adaptation plan that supports their decision to "defend in place." Their plan states, in part, “Climate change will likely impact Shaktoolik in many ways, but this plan focuses on the two most compelling threats: flooding and erosion.”

In their adaptation plan, the community adopted nine initiatives that focus on protection of human life, buildings, and infrastructure, prioritizing both the most cost-effective and those that promote the use of local materials and labor.

Following their plan, the community constructed a vegetated berm along the coast of Norton Sound to protect the community during storms and high water. The building of the berm was executed entirely by the community, facilitated by cooperation and coordination among the groups in the tri-org.

Perhaps the most important aspect of Shaktoolik’s climate adaptation process is that it is controlled locally. The tri-org, on behalf of the community, has been leading the process when working with outside agencies and entities. This has allowed Shaktoolik to adapt in the way the community members see fit. The community's decision to "defend in place" enables it to continue to develop the community and improve quality of life while still considering long-term strategies to address climate change impacts, such as relocation to higher ground.

Adapting to climate change is likely to be an ongoing process for the people of Shaktoolik, no matter where the community is located. By maintaining control over the process and being unified as a community, they have put themselves in a strategic position to dictate their own future and make progress in providing safety, security, and a higher quality of life for the next generation.