The four member tribes of the Upper Snake River Tribes Foundation collaborated on a Climate Change Vulnerability Assessment, resulting in a quantified assessment of their shared concerns and establishment of a common foundation for future adaptation efforts.

“What we are seeing on the Owyhee is probably due to less water, but, what else? Hot days. It has gotten very hot. Let’s not leave it there…what do we do about it?”

The climate around the Upper Snake River is changing.

The Snake River watershed—which extends from Wyoming across Idaho and into Utah, Nevada, Oregon, and Washington—encompasses a complex and unique range of ecosystems, plants, and animals that has sustained humans in the region for over 10,000 years. 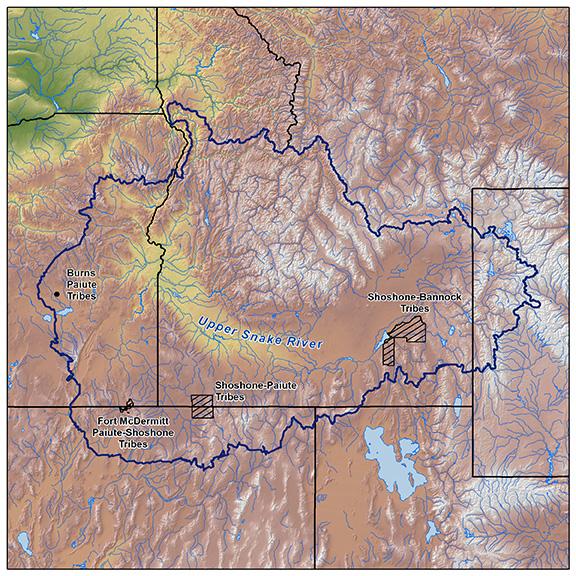 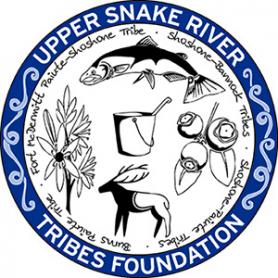 These climate-related impacts are raising concerns among tribal members about impacts to fisheries, wetlands, water supplies, community health, and food systems. The USRT Foundation is dedicated to the four tribes' common vested interests in protecting their rights, resources, cultural properties, and subsistence practices, including fishing, hunting, and gathering of traditional foods and medicines, and is working to understand and mitigate these challenges by engaging the four member tribes to assess their climate-related vulnerability and ultimately address impacts.

In 2016, the Foundation undertook a collaborative Climate Change Vulnerability Assessment (CCVA), partnering with external groups Adaptation International, the University of Washington, and Oregon State University. The project evaluated the relative climate change vulnerability of some of the species, habitats, and resource issues that are important and valuable to USRT member tribes.

Direct and ongoing participation with tribal leadership, staff, and membership was central to the success of the assessment. The collaboration included traditional knowledge, tribal priorities, local scientific observation, downscaled climate projections, and the best available science on how climate change is projected to affect natural resources.

The assessment process began in the spring, with the creation of localized temperature and precipitation projections for the project area. In April, project staff conducted site visits to member tribes’ reservations to identify shared climate concerns. During the summer, NatureServe's Climate Change Vulnerability Index was used to evaluate the vulnerability of the shared concerns, and in July, staff and leadership convened a vulnerability workshop in Boise, Idaho.

Vulnerability rankings from the Climate Change Vulnerability Assessment, showing shared concerns under two climate scenarios. A complete discussion of the rankings can be found in the full report, available for download from the project website (see link at right, under Additional Resources).

The results of this collaborative process include locally relevant climate change vulnerability rankings for 16 habitats, plants, and animals. Working with the direct and ongoing participation of tribal leadership, staff, and membership, the vulnerability rankings were determined based on climate change projections, species-specific sensitivities, and the ability of species to adapt. An additional 12 shared concerns were assessed qualitatively.

The project also produced a series of handouts summarizing climate change vulnerability in the Upper Snake River watershed for big sagebrush, black-tailed jackrabbit, Chinook salmon, Columbia spotted frog, common chokecherry, Geyer’s willow, mule deer, and riparian habitat. The full report, along with the handouts and other project materials, can be downloaded from the project website (see link at right, under Additional Resources).

The assessment process was aided by support from the Bureau of Indian Affairs Tribal Resilience Program, the U.S. Environmental Protection Agency Regions 9 and 10, and access to resources and training featured in the Tribal Climate Change Adaptation Planning Toolkit.

Eight dams situated along the Upper Snake River bar passage of migrating Chinook salmon, Pacific lamprey, and steelhead, and prohibit them from reaching traditional spawning/harvesting areas. Climate change poses additional stressors to this already significantly impacted fishery, as found in the Climate Change Vulnerability Assessment (CCVA) results. Chinook salmon, Pacific lamprey, and steelhead have been central to the culture and diet of member tribes for thousands of years, and have played an especially important role in the tribes’ seasonal migration and subsistence diet. 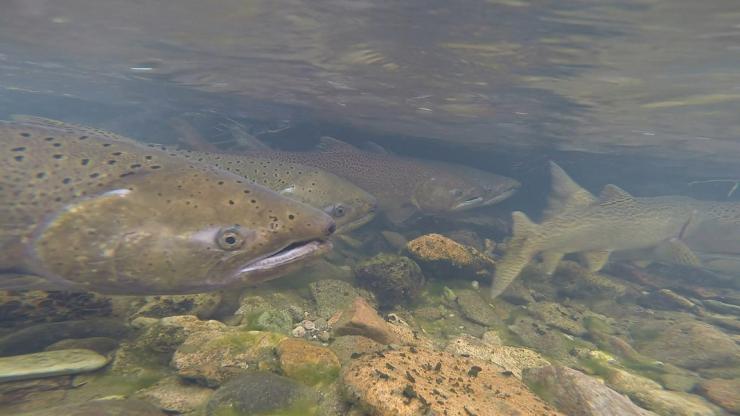 The Burns Paiute Tribe and Shoshone-Paiute Tribes have recently reinitiated ceremonial Chinook salmon fisheries on the Upper Malheur River and the East Fork Owyhee River by live-transporting fish around the dams (see links to the videos at right, under Additional Resources). The Fort McDermitt Paiute-Shoshone do not currently have access to Chinook salmon, while the Shoshone-Bannock Tribes are able to exercise their treaty rights to harvest Chinook salmon.

In order to protect or restore key resources like their fisheries, the Foundation bridges traditional ecological knowledge (TEK) and climate change science to work toward finding effective solutions in adaptive management that will benefit all member tribes for generations to come. Resources such as the Guidelines for Considering Traditional Knowledges in Climate Change Initiatives may provide support to the tribes as they engage in collaborative climate change efforts that involve TEK in the future.

Given the broad geographic range of the project area (over 97,000 square miles), workshops and webinars were key to the success of this collaborative process. A core team of representatives, composed of leadership and staff from the four member tribes and the Foundation, worked to help organize and attend site visits to each tribal community, recognizing that better communication resulted in stronger tribal engagement.

During the April 2016 site visits, the tribes identified many species, habitats, and resources that they had either already seen affected by changing climate conditions or were concerned about being affected by projected future climate change. Concerns documented by two or more tribes were considered "shared concerns." The set of 28 shared concerns assessed for climate change vulnerability in the project provided a balanced cross-section of the species, habitats, and resource issues important to the tribes. 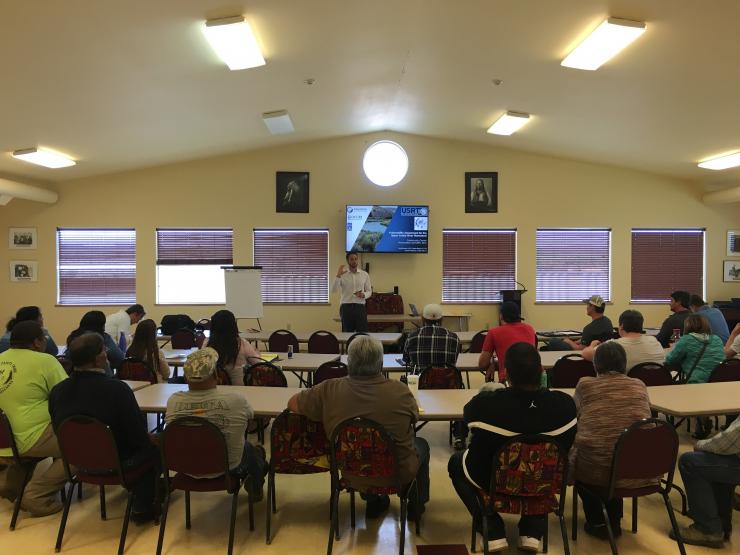 An essential step in this project process was the collaborative vulnerability assessment workshop held July 28, 2016, in Boise, Idaho. Representatives from the Foundation and each of the four member tribes gathered for this one-day workshop, the focus of which was to incorporate local and traditional knowledge into the draft vulnerability assessment results for each of the shared concerns. This collaborative review was accomplished using a combination of large group discussions and small group breakout sessions, during which the core team members reviewed, evaluated, and commented on the quantitative and qualitative results of the CCVI assessment process for each shared concern. Local knowledge was extremely valuable in modifying these results to account for local variance in factors of exposure, sensitivity, and adaptive capacity. Ultimately, incorporation of this information led to an adjustment of 19 individual factors affecting vulnerability, and the re-ranking of one species’ relative vulnerability ranking.

Planning for and adapting to climate change is a process and not the outcome of a single project.

This assessment is the first in a series of three steps that the USRT Foundation and its member tribes plan to undertake over the next several years as part of a comprehensive climate change effort, including:

Strengthened collaboration between the four tribes and assessment of their shared concerns under regional climate change was, perhaps, the most important outcome of this assessment: the collaborative results help to establish a common foundation for future adaptation efforts among and between the member tribes. The species-specific vulnerability information from the report can assist in the development of truly localized adaptation strategies and actions that minimize the negative effects of climate change and take advantage of emerging opportunities.

Continued collaboration—and action—to address these vulnerabilities and prepare for the future will help ensure that the tribes, who have lived and subsisted in the Upper Snake River watershed for thousands of years, will continue to thrive for generations to come.